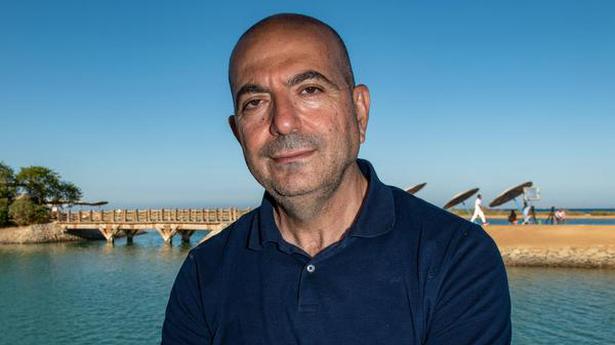 Any cinema that Hany Abu-Assad makes under the label of a ‘Palestinian filmmaker’ will be an act of political resistance regardless of its theme, subject or genre.

Born in Nazareth, and later migrated to the Netherlands, the 57-year-old is best known for films like Paradise Now (2005) and Omar (2013).

He describes the Palestinian occupation as a ‘Zionist project’ which involves the erasure of the word ‘Palestine’ from collective memory. “You have no idea how much they terrorise and pressurise you to not define yourself as Palestinian, and I know that,” says Abu-Assad. “Any filmmaker who fights against the powerful system… It will come at a price and you will be dehumanised.”

Clearly not one to tip-toe around politics, Abu-Assad is currently in the city for the 21st Mumbai Film Festival (MAMI). Dressed in a navy blue suit, he sits down for a quick conversation in the jury lounge, after a masterclass with actor-filmmaker Nandita Das.

Abu-Assad — who’s heading MAMI’s international competition jury this year — has evident affection for meaningful cinema as he dismisses the empty use of “art for art’s sake” as a “nonsense expression”. “In the 18th century, when artists were used by the State and church to glorify themselves, there was a counter-movement of art for art’s sake,” the filmmaker explains. “Later, with modern art, the expression was used because art became too commercial, [the context is what] people forget today.”

A self proclaimed third-generation Palestinian filmmaker — “First-generation were filmmakers in exile, second were people from the inside” — Abu-Assad decided to become a filmmaker at 14, when he saw One Flew Over the Cuckoo’s Nest (1975). “Back then I wanted to rebel against the occupation and the film made me realise that I could resist without taking other people’s lives or your own life,” he recalls. Growing up in a traditional family, his mother instructed him to become an engineer instead. So he pursued the profession in the Netherlands and worked as an aeroplane engineer for two years, before deciding to move back and assist a documentary filmmaker in Palestine.

Abu-Assad entered the world of cinema as a producer with Curfew (1994), bringing out the human dimension of conflict. In the last two decades, he’s manifested the hopes, aspirations as well as helplessness of the Palestinian people with empathy, insight and intimacy. The filmmaker first caught international attention with his film Rana’s Wedding (2002), one of the earliest Palestinian films to play at the Cannes Film Festival, during the International Critics’ Week.

Three years later in 2005, Abu-Assad found unprecedented fame with Paradise Now, a film about two Palestinian men preparing for a suicide attack in Israel. “This was after 9/11 when Islamophobia was everywhere, so it was crazy to think that this film would go to festivals,” he recounts. But to this surprise, the film not just premièred at the Berlin International Film Festival, but also won the Golden Globe Award for Best Foreign Language Film and was nominated for an Academy Award in the same category. “If you grew up in Europe, you would want to go to Cannes, Venice or Berlin, but going to Hollywood was like betrayal,” the filmmaker states.

Of course the lure of Los Angeles was too hard to resist. When Creative Artists Agency LLC, a premium talent agency in Los Angles, offered him big money to supervise scripts, he agreed. “I then found myself in these posh hotels with nothing to say and I woke up in Hollywood with a nightmare,” he reveals. Out of frustration, he wrote Omar, a script he claims to have written in four hours. “If you consider yourself an artist, then your work has to convey a message, make people think and have emotions,” he philosophises.

Abu-Assad’s cinema isn’t one without an impact. In 2005, when Paradise Now was nominated for the Foreign Language Film Oscar, it ran into considerable controversy when the Academy Awards initially referred to it as a film from the ‘Palestinian Authority’ and later as a film from ‘Palestinian Territories’.

Now 15 years later, the filmmaker believes Palestinian cinema has come a long way. “First of all we don’t have a country, we are occupied and don’t own our resources, so we are a resistance movement, and for a resistance movement we are doing very good,” Abu-Assad observes. “We earlier used to make one film every three years, now we make three every year.”

Although Palestinian voices have gained traction and support world over, Abu-Assad concedes that Israel’s counter-narrative is “much bigger and stronger”. But he finds solace in seeing how Palestinian occupation has become a yardstick for morality in many parts of the world. “I was watching a British Netflix series recently where this girl called her lover a bad person because he doesn’t support Palestine or the climate change movement,” he laughs.

In the larger scheme of things, Abu-Assad believes that the Palestinian movement has “become less important”. When he looks around him, he finds that there are other bigger issues like the global rise of right-wing politics, climate crisis and economic slowdown, that is affecting the world as a whole.

“As a Palestinian and citizen of the world, I believe that if we deal with these, our problems will also be solved,” he emphasises. As for his contribution, it will continue to be meaningful cinema. Without divulging any details about his current projects, he shares his recipe for making good art: engagement, deep affection for humanity and some amount of talent. “If you are selfish, you can’t make good art,” he declares.

Two initiatives related to youth theatre that began in 2007, and are still going strong, will have showcases in the city over the next few days. Thespo at Prithvi (TAP) takes the infectious vibe of the eponymous festival and stretches it beyond just one week in December. For two days a month, plays staged at […]

‘The killing was a turning point for fake news’

Two decades ago, in the middle of the night, a gang led by Dara Singh, a criminal with links to the Bajrang Dal, a Rashtriya Swayamsewak Sangh (RSS) affiliate, set fire to the jeep of Australian Christian missionary Graham Staines, who was asleep with his two sons, Philip and Timothy. The mob was driven by […]

Whether it’s Anjali in The Trip, Golu Gupta in Mirzapur or Shaalu in Masaan, there is spunk and energy that permeates all of Shweta Tripathi Sharma’s characters. Talking to the actor makes it obvious where is comes from. On being congratulated for the response to the trailer of her next release, Gone Kesh, which hits […]