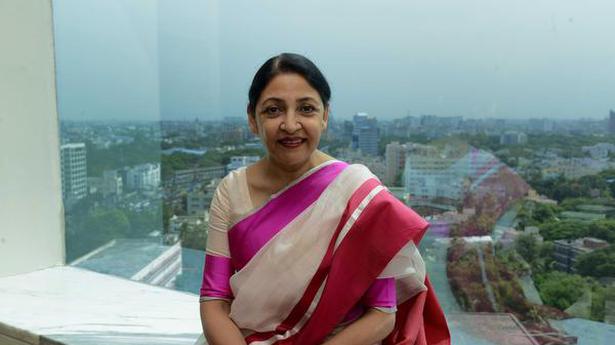 Deepti Naval describes acting as the best way to live a life, and in her career of nearly forty years, the actor has navigated her way through heartbreaks and fading work. The veteran actor is thankful that she never became “convoluted” during the highs and lows.

But she continued to feature in films like Chashme Buddoor, Ankahee, Mirch Masala among others in the 80s. She most recently starred in Amazon Prime Video’s Made in Heaven.

“Every decade there’s a new trend of films. Something else is more liked by the audience, something else is more popular. People say you need to realign your career with the new, of course, but you have to basically stick to what you believe in doing,” Ms. Naval told PTI.

“You have to stand for the work that you do. The trend in cinema will keep changing, but do the kind of work you want to do within that changing scenario, keep picking what convinces you,” she adds.

Reflecting on her close to four-decade-long career, the 67-year-old actor says it isn’t always difficult to stick to one’s conviction but the lean periods can be particularly tough.

“I have gone through mine, when I felt the kind of cinema I want to be a part of isn’t there at all. The 80s were marvellous, splendid years for all of us- Shabana (Azmi), Me, Smita Patil, Om Puri, Naseeruddin Shah, Farooq Shaikh, we did our best work then.”

“Then in the 90s there was some lucky work coming along but after that, somewhere in the late 90s, I felt that not much was happening and I was not getting the stuff I wanted to do.”

This lean period, she says, would’ve hit her hard if she hadn’t branched out to find more outlets for her creativity.

“I had been writing throughout from a long time, but (during that phase) I went back to painting in a major way because I felt I have to be creative at all costs, under all circumstances, whatever it is. My creative process shouldn’t stop.”

“Because I had other means of expressions, I was lucky that I didn’t go under and start becoming all convoluted in my head. That can happen, if you’re a serious actor and you’re here to really be a part of cinema, and when cinema ignores you, it can be devastating,” she says.

For Ms. Naval, the phase lasted for a few years before she picked up steam again with films like Firaaq, Memories of March and Listen Amaya.

“My painting and writing has always been parallel. That’s why probably where my colleagues have done 300 films, I have done only about a 100, out of which I’d say at least 30-35 films I am even proud of.”

“You can’t be in the industry without your share of heartbreaks, disappointments, and frustrations also. But as long as you’re able to stick to your guts and pick the roles you really want to do, the whole journey becomes worthwhile,” she added.

Ms. Naval was recently honoured with Excellence in Cinema award at the JIO MAMI Mumbai Festival with Star.

The Tamil Nadu Congress Committee has condemned the move to send a notice to the college that hosted actor Vijay’s Bigil audio launch. In a statement, the party said, “Actor Vijay is not associated with any political party. He is an artist who has the respect and admiration of lakhs of youngsters. He did not […]

‘It is a great time to be an actor’

Rangbaaz Phirse, is a show inspired by true events and marks the second season of ZEE5’s original series Rangbaaz. The series which released last week stars, actor Gul Panag who plays the “right-hand woman”, the “second in command” to Jimmy Sheirgill’s Amarpal Singh. In a short telephonic conversation, Panag told The Hindu that while she […]