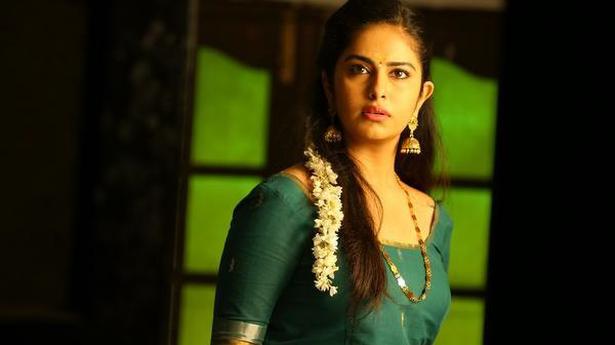 The significant unibrow on Avika Gor is not visible any more. She has gone for a make over. Avika is just 22 but one feels she’s been around for ages because she’s been acting since the age of eight.. It has been almost three years since we saw her last in Ekkadiki Pothavu Chinnavada. Busy in Mumbai with television projects like Laado, Fear Factor, Khatra Khatra Khatra, Avika had also wrapped up a Hindi movie as a Banarasi girl dealing with a social issue. She has also featured in music video. Avika shares, “It is basically a Punjabi song. Released recently, the Indo pop track is called Doggy and is about a guy trying to propose to a girl and a doghelping the romance. Singer Ishaan Khan is being launched with this song.”

About the long gap in Telugu films, she states that she didn’t actually intend to take a break. She impressed with her performance in Uyyala Jampala and other films. She says, “I am experiencing the kind of nervousness and excitement that I faced for my first film now. Whatever project touches my heart, I will do. It doesn’t matter if it is a film, a television serial or a web series; I want to do all languages. As an actor it is important to go all out and try it. I wanted to be a part of Laado and it was impactful. A daily soap consumes 30 days and I was welcomed with open arms.”

Avika wasn’t too happy with many Telugu projects she was offered before Raju Gari Gadhi 3. While she waited, she got a call from Ohmkar, she had a meeting with him and okayed the film almost instantly. She recalls, “My dates were blocked in Mumbai and I heard Tamannah was the first choice for this role, then one day I was called for a narration and things moved briskly. I had no reason to say no. I got scared with every scene and I think audience will feel the same. I have never tried this genre so far and in this film you will see me screaming and yelling. I was so scared initially, I thought I would have sleepless nights. At home I always go under the blanket to see horror films but now I like this idea of scaring people. It is so much fun now.”

Avika lost a lot of weight — almost 15 to 16 kilograms and yet says she she still needs to lose more. Couple of years back she says she didn’t feel confident enough to be on screen and went off the radar. She worked out, tried dancing and the results are gradually showing now. She shares, “People called it a weight-loss journey but I say it is being fitter and confident. I am big foodie and I can’t quit it easily especially my favourite potatoes. So I took a lot of time, controlled the portions I ate and exercised. The entire thing lasted a year or a year and a half.”

The actor relocated to Hyderabad a year ago as the projects she is now getting require her to stay here for a longer period. About upgrading her skills, she says she loves challenges. “People have seen me since I was eight. The same kind of acting doesn’t work. I haven’t learnt acting in a school and what I know is what I picked up on the way. Raju Gari Gadhi 3 is not my comfort zone, yet I did my best.”

Avika believes the future is in web series, and any day she’d love to be home and watch them on her couch. So far she hasn’t got any offer as such but as of now her focus is on the outcome of Raju Gari Gadhi 3 which she hopes will give a new dimension to her career.

Some of the most compelling documentaries continue to leave a lasting mark on not just audiences, but on society and policy too. Blackfish, From Darkness To Light, Food Inc. and An Inconvenient Truth are just some that come to mind. However it is also worth looking at the untapped reservoir of projects in India made […]

IB Radhika Rani and B Vasanthakumari are different from each other in their artistic endeavours. While Radhika loves experimenting with abstract, Vasanthakumari unleashes her creativity via mural paintings. ‘Chayillyam’, their exhibition at Museum Auditorium, showcases their works. Natives of Kollam, the duo had met at an event organised by Quilon Art Gallery. “We were among […]