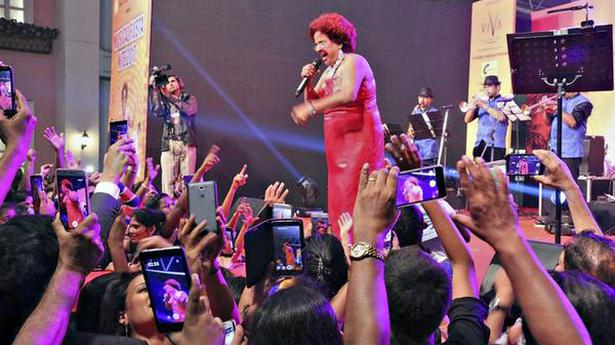 Just before our interview, Konkani singer Lorna Cordeiro announces, “I am very scared of answering questions by reporters. I’m not a very effective speaker, you see.” Reassured that she won’t be allowed to feel nervous, she smiles, displaying a tiny bit of confidence. “I’m a completely different person on stage. I don’t even rehearse before a show. The band keeps practising and I don’t interfere. I just go up and sing,” she says, adding that this wasn’t always the case. “When I was young, I did have a bit of stage fright, but that disappeared,” she recalls.

The singer, who goes by the stage name Lorna, has been described as the Nightingale of Goa. She turned 75 last August, and is ready to do as many shows as possible. After receiving the Lifetime Achievement Award and performing at the World Konkani Music Awards in Goa last week, she is ready to take Mumbai by storm, at the Music of Goa show organised by Goan Outreach Association this Saturday.

On favourites and comebacks

“I will play all my hits, including the crowd favourites ‘Nachom-ia Kumpassar’ and ‘Bebdo’. There will be breaks where other singers will perform. I can sing 18 or 19 songs without a break but my band thinks I need rest. Though I keep ‘Bebdo’ for the end, the audience requests it all through the show. But I don’t budge. On stage, I am the boss,” she says.

For someone who totally gave up singing for 25 years, Lorna’s comeback in 1995 was seen as remarkable. She stopped because her mentor, saxophonist, trumpeter and composer Chris Perry, didn’t allow her to sing with anyone else. “Early in my career, Chris Perry really encouraged me and I am what I am because of him. But in my contract, I had agreed not to sing with anyone else. It was tough to quit singing, but once I decided, I stuck to it,” she explains. Lorna says she has no regrets about that period. “What’s the point? Forget about live music, I didn’t even practise or hum my songs. It’s not easy but I did it,” she beams.

Hailing from Saligao in Goa, Lorna was encouraged to sing by her father, Teofilo Cordeiro. She reminisces, “My father’s family was full of crooners. All my siblings got into singing. My sister Jean sang in restaurants.” Lorna began as a jazz vocalist, and was promoted by Perry. After Goa, she performed a lot in Mumbai, in hotels and nightspots like the Taj, Ritz, Ambassador, Talk Of The Town, Venice and Blue Nile. In Delhi, she was a regular at Gaylord’s. She says, “I followed the golden age of jazz, my favourites being Ella Fitzgerald and Louis Armstrong. I was totally inspired by Ella, though people felt I sounded more like Bessie Smith. They would know better.”

Initially, she was hesitant to sing in Konkani. She says, “Chris insisted, and gave me two songs. Everybody loved them, and a new journey began.” ‘Bebdo’, ‘Tuzo Mog’, ‘Pavsachea Tempar’, ‘Nachom-ia Kumpassar’, ‘Red Rose’, ‘Lisboa’, ‘Sorga Rajeant’ and ‘Calangute’ became hot favourites. “Initially, HMV only promoted singer Alfred Rose, but once I clicked, they came to me.”

Lorna says one of her career highlights was to record Konkani songs, including the hit ‘Maria’, with ace playback singer Mohammed Rafi. She explains, “It was Chris’s idea. Rafi believed in knowing the meaning of each word in order to get the perfect expression. So he would write the lyrics in Urdu, memorise them and practise mentally. He said I had a great voice.”

Once she became used to staying away from the glory, Lorna never wanted to return. She says, “Pianist Ronnie Monsorate was very keen that I come back but I refused. He approached my mother who told him to keep persisting till I relented. That’s what I did eventually.” Her 1995 comeback concert at Goa’s Miramar Beach received a rousing response. “I initially thought I’d do only one show and stop. But seeing the response I decided to continue. Today I am happy singing. After the Mumbai show I head to Mangalore,” she says.

Lorna has been the subject of two films. The heroine’s role in Anurag Kashyap’s Hindi movie Bombay Velvet was inspired by her. “I haven’t seen it. I was scared to see what Anushka Sharma would do,” she quips. Regarding the Konkani film Nachom-ia Kumpassar, directed by Bardroy Barretto and based on the lives of Perry and Lorna, she says, “The director says he has paid me ₹10 lakh but that is wrong. He didn’t even ask me before making it. My friends told me to go to court but who has the time? People are enjoying the film, so it’s fine. Who am I to stop them?”

Though she visits Goa often, Lorna spends most of her time in Mumbai, at her home in Dhobi Talao or her sister’s house in Mazagon. She listens to music regularly but wishes young Konkani musicians come up with something new, instead of using tried and tested sounds. She adds, “I like singers Sonia Shirsat and Nephie Rod. They are good. As for jazz, you tell me, is there any jazz today?” When asked whether she spends her time reading, praying, watching television or cooking, Lorna laughs, “I don’t have any plus points. If I had, I’d have been a different person.” It’s a far cry from the start of our interview when she talked about being nervous.

When producer Aarti Shetty called Sonam Kapoor to ask if she would consider playing the lead in the screen adaptation of Anuja Chauhan’s debut novel The Zoya Factor, Kapoor responded with a prompt “I don’t think anybody but me should be playing this role”. Bookish bonds The actor has had a long-standing relationship with the […]

Light among the darkness

Circa 1989, as the errant flames of an inchoate uprising were being fanned in Kashmir, a film by Muzaffar Ali, titled Zooni, being shot in the valley, found itself in the midst of a general upheaval not of its making. Starring Dimple Kapadia, the film was based on the 16th century Kashmiri poetess Habba Khatoun, […]

An evening of jazz by Adishakti

Adishakti will present ‘All The Things That You Are’, an evening of jazz, on Sunday featuring two accomplished Auroville-based musicians. Sankarshan ‘Shanks’ Kini is a composer, arranger and multi-instrumentalist with Hindustani Classical training and eight years of experience in the Mumbai music industry, during most of which he was a guitarist in Kailash Kher’s rock […]