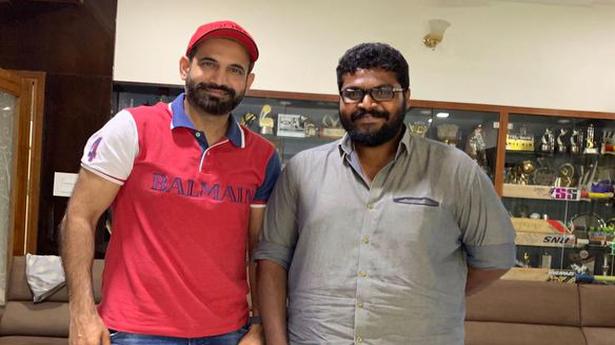 Cricketer Irfan Pathan will be seen in a prominent role in the upcoming Vikram film, tentatively titled “Vikram 58”, directed by Ajay Gnanamuthu and produced by Lalith Kumar’s Seven Screen Studio. Meanwhile, cricketer Harbhajan Singh will debut in the Santhanam-starrer Dikkiloona, directed by Karthik Yogi and produced by KJR Studios and Soldiers Factory.

The principal photography for the Vikram film will begin soon, and it will be shot in multiple locations across India and different countries, states a press release. While AR Rahman will be scoring the music for this big project, Sivakumar Vijayan will be responsible for camerawork in this film that sees Vikram teaming up with Ajay Gnanamuthu, who is known for Demonte Colony and Imaikka Nodigal.

Irfan Pathan and Harbhajan Singh are no strangers to Chennai, having played for the Chennai Super Kings in the Indian Premier League. Harbhajan, in fact, regularly tweets in Tamil to connect with his fans in Tamil Nadu.

Vikram is addressed as ‘Chiyaan’ by his fans.

“Proud and honoured to introduce @IrfanPathan in #ChiyaanVikram58 in a super stylish action avatar!! Welcome on Board sir and wish you a sensational debut,” the film’s co-producer Seven Screen Studio said on Twitter.

Gnanamuthu tweeted: “Welcome on board @IrfanPathan Can’t wait to unleash your new avatar to the audience!! Time for some solid action!!.”

The director also tweeted a picture of himself and Pathan.

Progress over perfection: These podcasts are all about body postivity

From Jameela Jamil’s I Weigh to Nicole Byer’s Why Won’t You Date Me?, these body image positivity talks are for your weekly Podcast recommendations. Source Related

A musical tribute to Rishi Kapoor

The Hindu remembers the actor who lip-synched some of the Bollywood’s unforgettable melodies. Source Related

Anthems of resistance: I will make music till end of time, says Imphal Talkies and the Howlers founder Akhu Chingangbam

“It’s really hot here,” says Akhu Chingangbam, as we catch up with him on a sultry March afternoon in Fort Kochi. And then he says, “Back home, it’s beautiful right now”. Home is Imphal, where Akhu’s roots, heart and inspiration are, and where he keeps going back to through the length of our conversation. Akhu […]