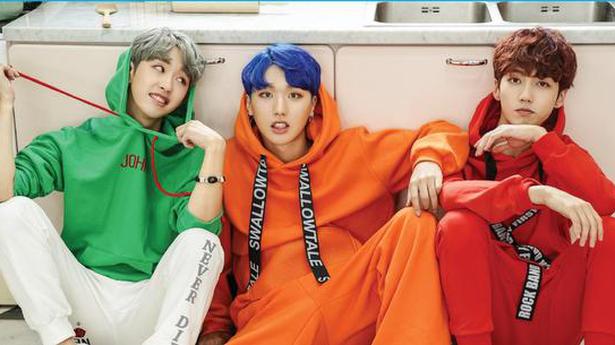 Narachan, Bitsaeon, and Roda of M.O.N.T., through a translator, explain the meaning of their band name. “The CEO (of record company Fly Music Entertainment) came up with M.O.N.T., which stands for Members Of The National Team. We aim to become representatives of K-pop overseas,” they say.

Does that mean their biggest competition is BTS (their record-breaking compatriots), I jokingly ask. The three laugh heartily at the notion, before Narachan, the leader of the group, says, “We are far from that, but are working hard with that in mind. That is our goal: to become the national team.”

So far, things are looking good. Their official debut was in January this year with the release of their first mini album, Going Up. It featured the catchy single, ‘Will You Be My Girlfriend’ which has 1.1 million views on YouTube, they have nearly 70,000 followers on Instagram, and have performed in countries such as Brazil, Israel, and of course, India.

After earlier performances at the Hornnbill Festival in Nagaland; Imphal, Manipur; and Delhi, M.O.N.T. is back in the country for the MONT FOR YOU tour. After performing in Bengaluru on September 21, they will head to Mumbai on September 23 and Delhi on September 25.

M.O.N.T. sat down for a chat with MetroPlus at their hotel a day before their concert in the city.

Cheerful, open and exceedingly polite, the three, who all have a background in music, start by talking about how they became a part of M.O.N.T.

Speaking in English and Korean, Narachan (23), says, “I played bass guitar in a band in high school and have also been in a church band.” Rapper Roda (21), who studied in China when he was young, says, “When I was in middle school, I started composing and writing songs and have been doing so since then.” Bitsaeon (24), the main vocalist, has a formal education in music from the Sejong University. “I liked music since I was young and so I went to university for it. Actually, my professor introduced me to the CEO of the record company.” Narachan, who was in another band earlier under the same company, joined M.O.N.T. as the leader after that band split up, and Roda was spotted by the CEO during a hip-hop festival while he was still in high school in China.

Interestingly, the three have been given stage names that are pure Korean words. Narachan means “clean and kind person”, Bitsaeon means “the light is bright”, and Roda, whose name is meant to sound a little more English because he is the rapper, means the “awaited genius”. (Some light-hearted ribbing ensues at the mention of the word genius by the other two band members at this point.)

Considering that there is a surge of interest in Korean culture worldwide, be it music, food, makeup, or TV shows, what do they think are the factors contributing to this?

Narachan says, “If you look at K-pop, you can see many different aspects of Korean culture in it. It is a gateway to our culture because you get to experience Korean beauty and style through K-pop. Also, some K-pop singers sing songs that feature on TV shows and some are even actors.”

On for what it feels like when they travel to other countries where often people don’t know Korean but turn up because they are huge fans of M.O.N.T., Narachan says, “We feel good. Even though they don’t know our language, they study ahead of time to learn our lyrics and sing along with us. We feel moved by how the fans interact with us.”

Speaking of the fans, how did the name for the fandom, MINT, come about? They say, “We gave the fans three options on social media – MINT, MINTY and MONKEY- and asked them to pick the one they wanted.” The fans are important to the group. Says Narachan, “We think it is important to meet them. We meet our fans in other countries through our tours because we interact with them ahead of time through social media.” Bitsaeon adds, “We use an app called V LIVE (used by K-pop idols) which caters to a worldwide audience, and also through Instagram. This helps us communicate with them more.”

As for whether they will continue this as they get more famous, the three say, “Of course.” Narachan adds, “They are the reason why we would become famous.”

As many as 300 budding young artists participated in The Hindu Young World Painting Competition held at Bombay Stock Exchange, Fort, on March 24. Students were given topics on the spot and the top 10 paintings in each junior and senior category were selected by the Sir.J.J. School of Art’s Professor M.K. Wanzari, HOD, Sculpture […]

About a girl named Shakeela

The short film ‘Shaeekla’ tells the story of a woman, who shares her name with the Malayalam adult film star Source Related