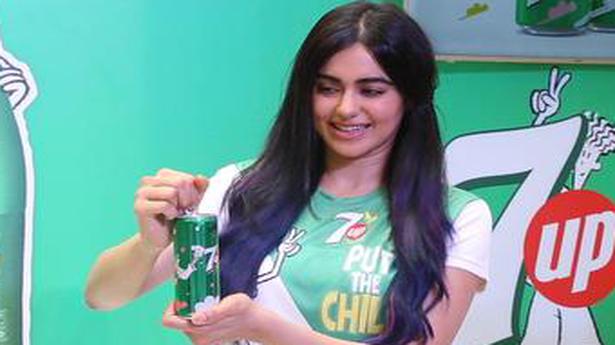 “Chennai isn’t new to me. My father is from Madurai, and I have been here for shoots. Every time I visit the city, people receive me with a warm heart,” says Adah Sharma, who was in town to launch 7 Up’s latest ‘Put the Chill’ campaign. Given that she’s been in the film industry for over a decade now, Adah believes she’s become more evolved as a person, “Actually, I’ve been around for more than a century, considering 1920 was my first film,” she jokes, adding, “I had very little knowledge about the industry when I started out. I thought I would be flooded with offers. But I realised the seriousness only after auditioning for films. In that way, I have become wiser now. And 1920 was a blessing, because I was able to prove my mettle.”

In an imaginary scenario, what would Adah say to that young girl who made her début in 1920? “It’s important to make mistakes and learn from your past experiences. I must have been in Class X when I got the part. So, I had no idea about make-up, how to do the hair and so on. Had they asked to me to jump off the cliff, I would have. In that sense, nothing much has changed.”

Adah has been making her presence felt across industries. She says that she picks scripts solely on the basis of intuition. “If something makes me happy and feels right, then I say ‘yes’. It could be signing up for a film or posing for an ad campaign. Even if it’s a physically-demanding role, I will do it because I love acting,” she adds. The actor says that she’s fortunate to have fans by her side, even if she does “something crazy and weird on Instagram”. Adah gave a breakout performance in the Telugu thriller Kshanam. In fact, her films in Telugu have been well-received by the audience. Is there a larger acceptance for Adah in Telugu cinema, compared to other industries? “I’ve been trying to work across borders. My dream, when I started out, was to do a film in every language across the world. I’m planning to finish India first,” she laughs.

The last time Adah Sharma was here in Chennai, she was shooting for Tamil film Charlie Chaplin 2. And, following the commercial success of Commando 2, she has been roped in for its sequel. She also awaits the release of Soulmate, in which she will be seen playing dual roles.

“I also have a Tamil film that will be announced shortly,” she signs off.

Veteran actor Max von Sydow, who famously played a game of chess with Death in Ingmar Bergman’s cult classic The Seventh Seal and the Three-Eyed Raven in Game of Thrones, has died at the age of 90. The Sweden-born French actor died on Sunday, his representatives confirmed the news to Deadline. French website Paris Match […]

FeedMyCityLIVE is a student initiative supporting the KVN Foundation by raising contributions to feed daily wage workers, underprivileged and homeless children and frontline workers, during the lockdown. Through initiatives such as FeedMyBangalore, FeedMyHyderabad, and many others in India, the students will be using all contributions to help the KVN Foundation deliver freshly cooked meals to […]

Trailer is a winner

The teaser of Dear Comrade that released a few weeks ago went viral in no time. . The visuals show Vijay Deverakonda raining blows on a student in one segment and another one shows Rashmika and Vijay Deverkonda in an intimate moment in the rain. Pleased with the response to the trailer, debutant director Bharat […]