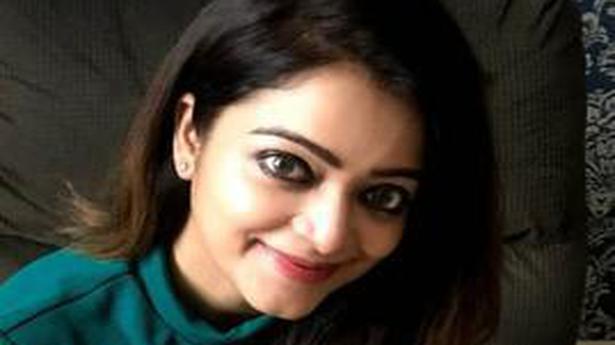 “It feels surreal that I survived,” laughs Janani Iyer about completing 10 years in the film industry. She regards it an achievement, especially for someone from a non-film background. “My journey has been great. I am here because of my love for acting and doing films that give me scope for performance.”

In a happy space

Janani looks forward to a slew of upcoming films. She has finished working in Vezham, directed by Sandeep Shyam. A murder mystery, it is a film she signed for immediately after she came out of Bigg Boss 2, the reality show that made her a household name. The film also sees her work along with her Thegidi co-star Ashok Selvan. “The song ‘Vinmeen’ from the film is popular even now,” she mentions and says Vezham has been an exciting outing. “I had to perfect the body language of a writer,” she states about her preparation for her role. “The film has an interesting plot. I play an intense, strong-headed, independent woman who takes charge of her life. She takes the lead to propose to the man she loves. We shot the film mostly in Chennai and the post-production work including dubbing is over. Now, we have to wait and watch if the film releases on the big screen or the OTT platform.”

She is equally thrilled about another upcoming film where she will be paired with Prabhu Deva. Janani is also a part of an OTT anthology directed by Deekay (who has done films like Yaamirukka Bayamaen and Kavalai Vendam). “It’s a horror comedy with five segments. I play the lead in one of them; we filmed it during lockdown,” says Janani adding OTT has opened up great opportunities for her. “I want to experiment more as long as good scripts come my way.”

Janani has also started a clothing line called The Hazel Avenue, an exclusive virtual store for hand-picked western outfits. She was recently part of a panel where she spoke on embracing a healthy lifestyle with almonds, organised by Almond Board of California.

Does she follow Bigg Boss 3? “Not really. I just saw the opening episode. I want to tell participants, be yourself and let the best person win. My request to viewers is that don’t troll or abuse the participants. It’s only a TV show for entertainment. ”

As the CEO of the North East Institute of Fashion Technology and the founder of Celebrating North East festival, Vikram Rai Medhi hopes that Delhiites will see that the Seven Sisters are a mix of traditional and the modern. The event, now in its ninth year, will see an exhibition showcasing handicrafts and handlooms(garments and […]

Kahaniya, a platform for storytellers, has caught the attention of Telugu filmmakers

The platform has nearly 30,000 stories in 11 languages Source Related