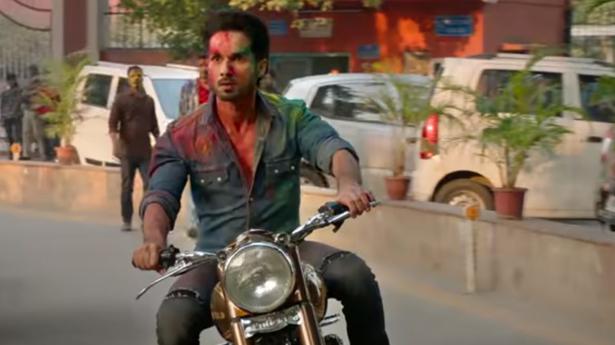 Messy hair, untidy beard, the protagonist gulping down alcohol straight from the bottle and puffing on cigarettes — much like the original, this Shahid Kapoor-starrer Kabir Singh, a remake of the Telugu film Arjun Reddy, seems to follow the same plotline.

Going by the teaser, the much loved remake of Vijay Deverakonda’s superhit film, is the story of boy-meets-girl and their tempestuous relationship following their ‘meet-cute’. The boy here is a uncannily similar-looking Shahid Kapoor while the naive girl is played by Kiara Advani. Shahid plays the role of a hot-headed but brilliant medical student who instantly falls in love with an innocent girl.

As the story unfolds, Kabir’s deep anger management issues are revealed. And yes, drugs play a role. He lives life on his own terms, spouting swear words and raises his hand to anyone who disagrees with him. The woman, on the other hand, is naive and hopelessly in love with the brash man, who pretty much decides to claim her, at first sight. How the director introduces the conflict followed by Kabir going on a rampage of self-inflicted pain holds the second half of the film.

In a problematic scene, a part of which is included in the teaser, the alpha male hero calls the heroine outside her hostel and kisses her on her cheek. Why is this problematic in a romantic flick, you wonder? It is when the protagonist, a virtual stranger, is just introduced to the heroine, and does not give her time or space to approve of his actions. In the times of #MeToo, we are made to wonder if this can be called out as harassment.

This is not the first time that Shahid Kapoor portrays grey characters on the big screen. In fact he has been quite successful in this regard in the past. The teaser carries montages of the actor donning several looks. The teaser also carries the original upbeat sound track by Radhan.

Directed by Sandeep Reddy Vanga, who also directed the original, the movie is slated to release on June 21.

Jiiva and Arjun to co-star in ‘Methavi’

A therukoothu artist and his passion for the art form; his trials, tribulations and missed opportunities that obstruct him in following his passion — Theatre Akku’s Adavu, is a play that comments on the reality and unfairness of it. Directed by Vetri MV, the play which will be staged this weekend, follows a short format […]

Box office results notwithstanding, Mandira Bedi, 47, has made her presence felt in her recent films. Making a smooth transition between different platforms, Mandira was recently seen in “Smoke”, a crime thriller and is now portraying the role of boss in the second season of MX Player’s “Kiska Hoga Thinkistan” which reflects office politics, professional […]