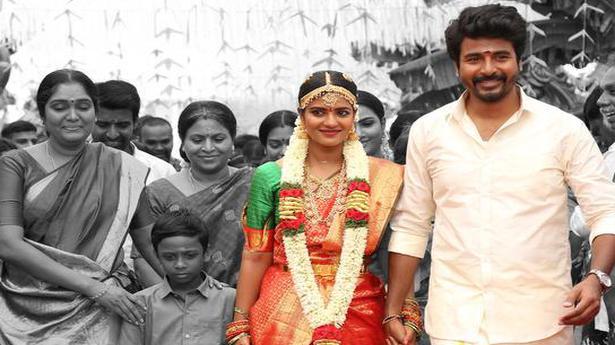 This Friday’s release is Sivakarthikeyan’s Namma Veetu Pillai (NVP), produced by leading production house Sun Pictures and distributed by Udhayanidhi Stalin’s Red Giant movies. The film is evoking a lot of interest in the trade. Sivakarthikeyan is teaming up with director Pandiraj for the third time; this is a combination that gave us Marina (2012) and Kedi Billa Killadi Ranga (2013). People are betting big on this collaboration, as Sivakarthikeyan is a darling among family audiences. especially in B and C markets, while Pandiraj understands the rural market the best, as proved by his 2018 blockbuster Kadaikutty Singam.

After forgettable outings in Mr Local and Seema Raja, Sivakarthikeyan badly needs a hit to hold on to his core strength — the family audiences. The trade still has immense faith in him and many believe that he deviated from his core audiences by doing mass films with weak storylines. Similarly, Pandiraj has a proven track record and has more hits with rural-based films like Kadaikutty Singam that grossed over ₹50 Cr from Tamil Nadu theatricals alone. And, NVP comes at a time when the year’s biggest grosser in Tamil Nadu — Ajith’s Viswasam — was set in a rural milieu.

The trailer of the film illustrated that the film would ride highly on the sentiment of ‘thangachi paasam’ (Aishwarya Rajesh plays Sivakarthikeyan’s younger sister). The Pandiraj touch could be seen in the dialogues (sample this: “Family is the one thing that will drive you to ecstasy and grief like no other”!) Rural elements are played to the hilt with Bharathiraja as the grandfather, Soori as the comedian and rural melodies from D Imman. Such entertainers, laced with action and songs, celebrate rural life and also appeal to family audiences in cities with roots in villages.

The rural touch in Pandiraj’s films is also present in the character’s names! In NVP, for instance, Sivakarthikeyan’s name is Arumpon and Aishwarya Rajesh is Thulasi, while Anu Emmanuel is called Maangani. A spokesperson of a popular theatre in Tenkasi said, “Films like Viswasam and Kadaikutty Singam definitely have a huge appeal among rural folks, even though they know such families do not exist in today’s times. It runs because of the nostalgia and feel-good family factor. These films also get repeat audiences if they work at the box-office.”

Pandiraj says, “We had a private screening recently and the response was very positive. Sivakarthikeyan has given a emotional performance and the ‘Annan-Thangachi’ sentiment will hold the viewers. I also firmly believe that human emotions are the same, whether in a high-end multiplex or a rural single screen.”

Kollywood’s Tier 2 and 3 markets, popularly known as B and C stations, are alive and kicking while in the rest of India, this market has almost disappeared. In Tamil Nadu, the growth of multiplexes is mostly limited to urban areas in the 3 Cs – Chennai, Chengalpet and Coimbatore, where 95 % of them are situated. This has led to single screens in rural and semi-urban areas getting renovated or turned into two or three small screens.

Last year, Pandiraj’s Karthi-starrer Kadaikutty Singam created a wave in rural and semi urban areas in Tamil Nadu, by collecting more than the multiplexes-dominated 3 Cs. Earlier this year, Viswasam edged past Rajinikanth’s Petta in Tamil Nadu theatricals primarily because of rural audiences. Due to a cap on ticket prices in Tamil Nadu, there is little difference between a multiplex ticket in an urban area and a single screen, and so, if the footfalls are more in rural areas, it will reflect on the total gross of a mass film.

A big fat family drama, set in a rural milieu with commercial ingredients, is difficult to conceive and execute, and if Pandiraj and Sivakarthikeyan succeed with NVP, it will surely bring back cheer for the Tamil film trade.

The rhythm is going to get you

Would you fancy a drum-jam workshop to explore the link between rhythm and movement? This hands-on demonstration at the Attakkalari Centre for Movement Arts (ACMA) seeks to understand rhythm through dance, according to Jayachandran Palazhy, founder and artistic director, ACMA. “This centre is a contemporary dance institution offering an opportunity to explore the inter-connectedness between […]

When Flight CS772 flew into Meenambakkam on Friday, September 13, 2019, shortly before 1 p.m., it scarcely created a ripple. But once the aircraft, Crystal Skye, was parked near a bay near the secondary runway with all the bustle of the ground handling agency concerned, there was realisation that this was a special flight. The […]