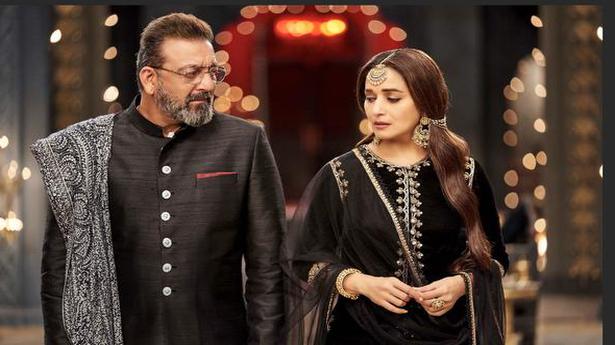 Kalank is a strange film that leaves one’s head in an odd whirl. Set in 1944-46 Lahore, on the cusp of Partition, it flits from one opulent set to the next — from lavish Husnabad (a fictional neighbourhood in Lahore) havelis to bustling streets of Heera Mandi, the abode of the courtesans. Here, people are often seen travelling by gondolas in canals reminiscent of artificial ones in The Venetian Macao. There is deliberate disregard for locational specificity — snow-laden mountains can spring up anywhere, be it Lahore or the Rajputana. It’s a self-consciously crafted film, very aware in setting real things up in an unreal way, be it the many turns of the plot, the simmering situations, the florid emotions, the declamatory give and take between the characters, the song and dance insertions or the overstated visual grandeur.

Just about everything — even the riots — are perfectly orchestrated and carefully choreographed. In the thick of the glitzy spectacle, lies a botched-up love story that intermittently springs to life, engages in fits and spurts in some big moments, dramatic reveals and emotional highs but largely leaves one distanced and uncaring. The deeper exploration of romantic dilemmas and tangled relationships gets a short shift in the larger-than-life design. From the first scene, to the last the idea is to make a proscenium out of the screen; the film is deliberately staged like an exhausting opera.

Despite the specific period setting, Kalank doffs its hat to many Hindi films, past and present —from Pakeezah to Devdas with DDLJ also thrown in, in the climax. There’s even a ‘Kajra Re’ like item number. The key thematic reference point — the long-held familial grudges and an illegitimate son’s deeply embedded sense of betrayal at the hands of his father — is very much Yash Chopra’s Trishul. A love triangle adds to this complication.

After the initial uneasiness of embracing the plastic world of Kalank, I did settle in and began to wickedly enjoy its old-worldiness, the formality underlying the relationships, one dramatic confrontation between characters leading to another and the talkie format. But the excesses — be it the protracted length, the over-the-top lines, the wordplay, use of metaphors or the constant repartee between lovers — bores rather fast. Lines like “Ummeed sirf intezaar karwati hai, sachchayi nahin badalti (Hope only makes you wait, it doesn’t change reality)”. Or the phrase “Aakhon ki kashish ko palkon ke aitraaz se chhupana (Hide the passion in your eyes with the denial of eyelashes). A character in the film says, “Main guftagu se thakk gayi hoon (I am tired of chatter).” So is the audience, including yours truly.

Despite coming together on screen after years Madhuri Dixit and Sanjay Dutt don’t quite make one go nostalgic. Dutt seems disinterested and, despite her natural affectations, Dixit doesn’t dance or emote like a dream as she has. Varun Dhawan and Aditya Roy Kapur manage to hold their own, Sonakshi Sinha barely has much to do other than looking perfectly made-up even when mortallyill. In fact, it’s the youngest of them, Alia Bhatt, who makes you care for her. But the one to steal the thunder is the odd man out, Kunal Khemu in a villainous turn on the margins of the narrative.

In the midst of the portrayal of complications of love across generations, the politics of the Partition remains half-baked — the arrogance of the Hindu minority, the angst of the huge Muslim working class, their jobs as lohars (ironsmith) being taken over by the British factories and the concomitant unrest and flashpoints are deliberately kept in the background. You could say that I am being overly righteous and needlessly cautious here but the climax left me discomfited and disturbed. The sight of menacing men in green kurtas, white skull caps and surma-laden eyes, purposefully brandishing swords comes with its own tired stereotyping and mixed messaging and evokes a sense of collective dread that one could have very well done without in the times that we are in now.

“More often than not, aspiring directors focus on dialogue delivery but overlook visual tooth combing,” says Ramana PMV, a Mumbai-based visual art director. Recently, he was in Visakhapatnam as guest of honour at an event by the Vizag Film Society. A still from Living Idol   The film society screened Ramana’s short film Living Idle […]

Film director A.R. Murugadoss has approached the Madras High Court seeking police protection for himself. He has claimed that a few distributors of the recent Rajinikanth-starrer Darbar are constantly intimidating, insulting and annoying him at his residence as well as office by claiming to have suffered losses due to bad run of the movie in […]

Kandukuri Ramesh Babu trains his lens on the innocence of childhood

Photojournalist Kandukuri Ramesh Babu celebrates what’s normally considered ‘ordinary’ and his new show ‘Songs of Innocence and of Experience’ marks the third anniversary of his gallery, Samanyashastram, which he established at Manikonda, Hyderabad, in 2016, to turn the attention on observations drawn from everyday life. Having worked in the media, he avers that while there’s […]