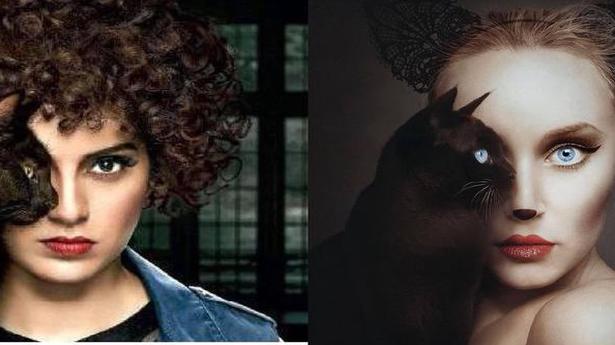 A Hungarian visual artist named Flora Borsi has accused the makers of Rajkummar Rao-Kangana Ranaut starrer Judgementall Hai Kya of plagiarism. Borsi said that posters of the film bear inspiration of her trademark style, and said such plagiarism of a freelance artist’s work was shameful.

Borsi on Monday shared the image of an original artwork of hers, which has a girl’s close-up with a cat on one of her eyes. Makers of Judgementall Hai Kya had recently released a poster featuring Kangana with a cat in a similar pose, and one of Rajkummar poster with a rat instead of a cat on his eye.

“It’s a famous Bollywood movie poster called ‘Judgementall Hai Kya’ They didn’t ask for any permission nor reached me out. It’s a shame for big companies plagarising freelance artists work,” Borsi wrote on her official Facebook account and Twitter as well.

The visual artist also did some research on the other posters from the movie starring Rajkummar Rao and deduced that they had been copied from other artists as well.

Borsi’s Twitter account describes her as a photographer and a visual artist. Her official page states that she has specialised training in digital photography and has had several solo exhibitions across Europe, Asia and North America.

“This movie poster plagarised my art! Could someone explain what’s happening, please? This is not right. ‘Judgementall Hai Kya’ Balaji Motion Pictures,” she tweeted.

WWE’s Braun Strowman: ‘I feel it is my responsibility to perform for my fans globally’

Ahead of special event ‘Money In The Bank’, the reigning WWE Universal Champion talks to us about how the sports-entertainment company are successfully organising fights despite the pandemic Source Related

A song for AR Rahman

As a tribute to AR Rahman on his birthday, January 6, a capella band Chord 7 recorded a mash-up of five songs by the legend, which was uploaded on their YouTube channel. Joining the six band members was playback singer Jyotsana. The songs in the medley are ‘Mangalyam…’ (Alaipayuthe), ‘Yuhi chala raahi…’ (Swades), ‘Dil se…’ […]

It is a few weeks after the Hindi children’s magazine Chakmak published the final episode of ‘Biksu’, an illustrated story about a young boy who comes of age at a boarding school in Jharkhand. The story’s illustrator and creator, Rajkumari, has just received an important call from her publisher’s office in Bhopal. On the line, […]