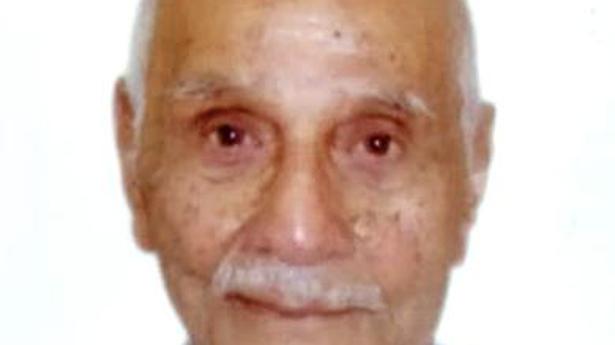 Centenarian Kannada film producer G.N. Lakshmipathy passed away on Thursday. The 104-year-old is survived by two sons and two daughters.

Through his Maruthi Movies, Mr. Lakshmipathy produced seven films, including landmark films in the history of Kannada cinema such as Uyyale, Ondanondu Kaladalli, Kaadu, and Chitegu Chinte. Devara Makkalu starring Dr. Rajkumar was the first film he produced.

His films were screened not only in Karnataka, but also at various international film festivals. Considering his contributions to Kannada cinema, the State government had honoured him with the Dr. Vishnuvardhan Award. Karnataka Film Chamber of Commerce expressed condolences over the death.

Maulana Abul Kalam Azad’s book “India Wins Freedom” is one of the most widely read books on the events and happenings leading to the partition of India. In response to this book Rajmohan Gandhi wrote “India Wins Errors: A Scrutiny of Maulana Azad’s India Wins Freedom”(2006) which, as its self -explanatory title suggests, tried to […]

The largest and magnificent object of National Museum, New Delhi is the installed chariot on the left corner of the campus, quaintly watched by every passer. Encased in a transparent and huge showcase, the chariot tells an interesting story from where it travelled to National Museum. This temple chariot was dedicated to Pandanalluru Sri Adikeshava […]

Photography has never had it so good. Thanks to the explosion of the Internet, information and mobile cameras, the medium has a newfound relevance. What with the scholarly work, exhibitions, discussions, museums, dedicated biennales and fairs building a discourse around it! “Everyone is looking at archives now that they never thought about earlier. They feel […]