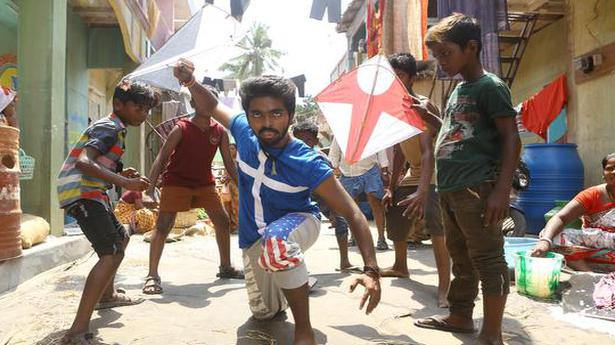 The shy music composer who was introduced to audiences in 2006 has grown up to act in author-backed roles and dance in kuthu songs. When GV Prakash debuted as an actor in 2015, people were unsure how long it would last. Today, the actor has completed films with Bala and Rajiv Menon, and will have two releases this April – Kuppathu Raja later this week, followed by Watchman.

As a composer too, he seems to be back in demand. The directors we associate with him (Vijay, Vetri Maaran and Vasanthabalan) are back to collaborating with him now. In a candid chat, Prakash tells MetroPlus how life has changed since he became an actor.

After a niche Sarvam Thaala Mayam comes a ‘massy’ Kuppathu Raja. Is that design deliberate?

In a way, it is good. Whenever critics accuse me of not taking up ‘acting-based’ projects, I now have Naachiyaar and Sarvam Thaala Mayam to show. But there’s something called box-office figures as well – and for that, I believe I need films like Kuppathu Raja. I’m trying to maintain that balance in my acting career. In fact, after Kuppathu Raja, I have a thriller (Watchman) coming up.

The slang. A lot of directors do North Madras-based films, but they don’t always get the slang right. But my director (Baba Bhaskar, an established dance master) has woven a storyline around something he has lived around. There’s something genuine about this gangster story and its dialogues.

Was getting the slang difficult, since your childhood has been very different?

The chemistry with Bala has worked out well in all the songs we’ve worked on before this film. So, I had the confidence that I can deliver what he wanted. He is also a personality who struts around like a hero himself, and that rubbed off on me.

Usually, ‘learnings’ are associated with critically-acclaimed films. Are there learnings in a commercial film like this too?

See, to engage an audience isn’t easy at all. Though it is a commercial film, it has elements of betrayal and vengeance. In a way, Kuppathu Raja is a bit like Gemini. One of its highlights is my dance, which I’ve worked on a lot.

You were a shy, introverted boy a decade ago when you were launched as a composer for Veyyil. Today, you’re dancing to a kuthu number and doing multiple interviews as a lead actor…

I can’t afford to be an introvert anymore! Earlier, I was in a safe zone, but today, I like challenging myself on the professional front. I think I’ve broken my mental barriers, thanks to all the exposure I’ve had over the last few years.

Even a few years ago, you were a much sought-after music composer and doing songs for big stars. Do you miss that now?

No. I have no interest in composing music for regular hero-films now. I want to do different albums now, which is why I have signed four superb projects – with directors Vijay, Vetri Maaran, Sudha Kongara and Vasanthabalan. I’d love to do music for a film like Sanju. I’d love to collaborate with a director like Rajamouli someday.

You’ve had your share of creative differences, with Vasanthabalan and Dhanush. Why does that happen?

Don’t you have differences of opinion with your editor? Creative minds are like that… fights are inevitable. But we’ve sorted things out and moved ahead, and fans can expect great music from our combination.

Your combination with Selvaraghavan gave us Aayirathil Oruvan (2010), a film that is ironically being celebrated only now.

We put so much effort into that project, and it pained me that it was not well received back then. Maybe now, Aayirathil Oruvan 2 is calling out to us.

Let us all collectively put on our tin foil hats for a moment and ponder over the industry today. Some of the most lucrative games are those massively multi-player online shooters, which require a lot of development time to get out the door finished. However, in the rush to get them out the door and […]

In A Room of One’s Own, the seminal essay written by Virginia Woolf 90 years ago, the maverick author makes a compelling argument for the space, both physical and figurative, that women writers must occupy in order to make so much as a dent in a literary landscape dominated by men. Part cautionary tale and […]