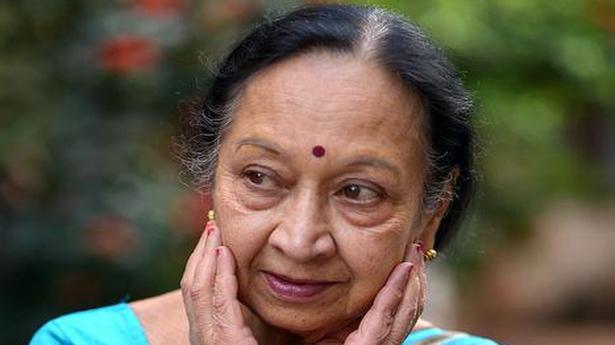 “It’s overwhelming to see people of Hyderabad telling me they still remember my portrayal of Satyabhama on stage. It fills me with joy to see young girls pursuing Kuchipudi here with passion,” Sumathy Kaushal had said while talking to us at her sister Vijaya Ramam’s Banjara Hills residence in 2017. She had come to the city from Los Angeles (where she’d been living for the past two decades) on an invitation from her students and friends who wanted to felicitate her on her 77th birthday. When she bid farewell to go back, little did one realise that it would be the last time.

Veteran dancer and guru Sumathy Kaushal passed away on the eve of Guru Purnima, at her second son Abhiman Kaushal’s home in Los Angeles. “She was ailing for some time. The death of her son (Adarsh Kaushal died last year due to heart attack) took its toll, though she took it in her stride,” shares her sister Vijaya Ramam, who had spent some time with her in the U.S. this April. Apart from her love for dance, Sumathy was fond of cooking and loved to wear cotton clothes, reveals Vijaya Ramam. “Living in the US, she used to find it difficult to wear saris all the time. She preferred to wear cotton salwar-kameez instead. She had sent all her beautiful Venkatagiri saris to be turned into salwar-kameez and I would get them stitched here,” recalls Vijaya Ramam.

While Sumathy’s deceased son Adarsh was a renowned photographer, the younger son Abhiman is a well-known tabla artiste. She was one of the first dancers to establish a dance institutes in the U.S. to train young Non-Resident Indians in the classical form. Her unique compositions and choreographies were significant for their purity of form and tradition. Never the one to rest on her laurels, Sumathy has been planning a ballet based on Hari Hara Sangamam – Ayyappa jananam, a literary work by their maternal grandfather, a poet and spiritual leader known as ‘Mahadeva Sambho’, shares Vijaya. Sumathy Kaushal was keen that at least one song should be sung by K J Yesudas — who himself is a devotee of Ayyappa — for the ballet. She was also keen to revive the memory and hightlight Mahadeva Sambho who was also a great vaggeyakara of the late 19th -early 20th century.

Despite living away from the country, Sumathy Kaushal was a guide and mentor to many dancers in the city. Telugu people will always remember her as their ‘Satyabhama’ who took Kuchipudi to global stage and helped connect them to the traditional form on foreign soil.

Donning the director’s hat a second time in a decade, Nandita Das’s film Manto starring Nawazuddin Siddiqui in the titular role has been raking critical acclaim at home and abroad. Having just returned from a screening tour of the film at the top universities in the United States, The Hindu caught up with the actor […]

The period from Ugadi to Sri Ramanavami is one that everyone looks forward to as they bring a plethora of cultural, literary, and musical events. As this year is the 125th year of birth of Chandrasekharendra Saraswathi, Paramacharya and the Sage of Kanchi, Sri Rama Navami Cultural Festival is celebrating its 58th Festival with many […]

Princess Diana musical to have Broadway premiere in April 2020

A musical, titled Diana, based on the life of the Princess of Wales is set to make its Broadway debut in April next year. According to The Hollywood Reporter, the musical is directed by Christopher Ashley. It will begin performances at New York’s Longacre Theatre on March 2, 2020, with an official opening set for […]