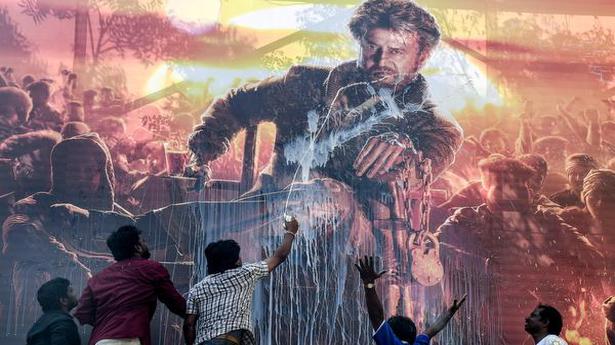 Every other week, a Tamil film fails to make it to screens on time. The most recent being Kalavani 2, which ran into a financial dispute. Before it, Vijay Sethupathi’s latest, Sindhubaadh, was mired in a similar financial quagmire, delaying the film’s release. A ₹1,000-crore industry facing such a crisis does not augur well for aspiring film-makers, and the audience. While there is a perception that the Goods and Services Tax and lack of recognition of the film industry by formal financial organisations are behind the crisis, industry insiders suggest that the problems are more fundamental — to do with financial indiscipline, opaque transactions and box-office reports, irrational star salaries and a failure to keep a leash on projects. The major stakeholders of the industry — financiers, stars and technicians, producers, distributors and theatre owners — are at loggerheads, creating a circle of distrust. The result is that films, already fraught with uncertainty, are hit hard.

With the film industry going through a protracted rough patch, the actors, film-makers and producers are locked in a sort of a blame game.

Producers claim the salaries paid to actors and technicians are ‘too high and irrational’ and that they are often taken unawares by the ballooning budgets, delayed production schedules and lack of financial discipline.

While producers and actors/technicians, who take home a substantial package, are at loggerheads with each other, everybody realises the need to make the industry more producer-friendly.

Up and coming star Vishnu Vishal, who delivered a major hit, Ratsasan, in 2018 and a few other critically acclaimed box office successes, says that the industry is facing a crisis on account of the exponential increase in the number of releases, costlier tickets after implementation of GST, hyper-critical audiences in the age of social media, and an unorganised film trade.

“When you find five movies releasing in a week, how will you decide which one to watch? Obviously, you will pick the one with the biggest star or look at the reviews. This would mean that the producer is also always looking for stars. When Vennila Kabadi Kuzhu came out, 40 new heroes were introduced along with me. In the last five years, how many new heroes have made their debut,” he asks.Vishnu acknowledges that a ‘profit-sharing’ arrangement with the producer is the way to go, but seeks to explain the possible worries that a star like himself or a technician will have before signing a contract.

“I have done close to 15-16 movies now and in more than half of these films, I have given up a portion of my salary during the time of release to help my producer. Only when actors support their producers, the producer will be encouraged to stay on in the industry,” he says.

However, he adds that there are still many issues preventing actors from sharing the burden of making the film with the producer.

Vishnu, who has also produced a few films, says that the reason why actors are very reluctant to enter into a ‘profit-sharing’ agreement is due to the non-transparent nature of the film business.

“Why do you think actors get into production? Most of us do it to understand how much we are actually worth. Even then, it is practically impossible to arrive at an accurate number. Which is why it is so important to have transparency in reporting box office numbers,” he says. Is there no way out of this deadlock between producers and actors then?

There is, says Vishnu. “How do you make a change in an industry? From the top or from the bottom? If the producers work with big stars and effect a change, then all other actors will have to follow suit, isn’t it? We will also be asked: when Ajith sir and Vijay sir are doing it, why can’t you?”

The war over budgets

The film-makers and producers are involved in a separate duel — one which involves budgets for shooting films.

It is here that many movies have run into deep trouble, resulting in producers having to spend way more than what was initially planned.

“My strength is in scheduling the entire filming process. Movies are not like painting a canvas. Painters can take their own time: paint, go out, come back and finish it and price their painting any way they want. Films are expensive. I schedule the production in excruciating detail so that the number of days of production comes down. Indian films do not need more than 60 days to shoot. If it is a two-hour film, we can comfortably shoot for two minutes a day, you can complete it in 60 days,” he says. Indicating that producers should go beyond being mere financiers of a movie, Rajesh says, “While the financier is a person who lends the money, a producer has to know and understand the process of film-making. The producer should be completely aware of the script — only then will he be able to make a decision on where to spend money and how much.” Asked if there is a way to learn the process of production, Rajesh says, “Film-making is a professional job. A film-maker should also be able to manage hundreds of people on the set and make everyone buy into his vision — nobody is born with such skills. We learn it over time and with experience.”

These podcasts could liven up your lockdown days

Staying indoors for a while? We have you covered. For your Weekly Podcasts, we have a list that features a truck driver’s audio diaries about mysterious murders; an alternate reality game; a possessed girl and more. Alice Isn’t Dead A truck driver, who is initially unnamed, goes in search of her wife, the eponymous Alice, […]

An Armenian poem on the Puducherry stage

As an old woman goes about her daily chore of sorting lentils, her mind wanders. Her memory revisits instances from her past, and poignantly she realises the passage of time. Woman Cleaning Lentils — a poem by Armenian poet Zahrad, is what inspired Lentils and Stones, a collusion of theatre, puppetry and dance, which will […]