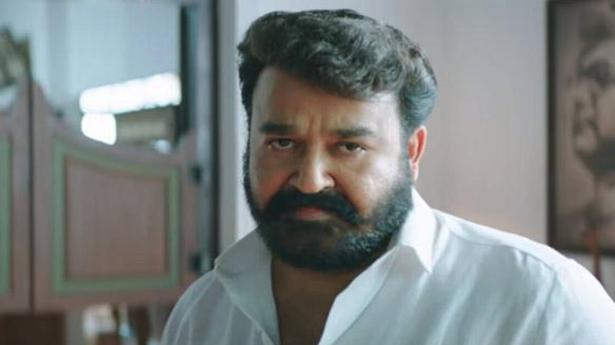 “It seems you watch quite a lot of popular masala movies,” says one of the many conniving characters in Lucifer to another, who had just drawn an analogy from popular cinema to explain a political situation. “Yes. I watch them all. It lets you know the public’s taste. I know in advance which scenes they will cheer for” – replies the other one.

This could very well have been a scene inspired from a pre-shooting discussion between the film’s writer Murali Gopi and director Prithviraj. The film is so jam-packed with such scenes aimed at eliciting cheers from Mohanlal fanboys that it just has a little space left for some craft and novelty. So, there is one brilliant tribute to that Sphadikam sequence of Aadu Thoma with his feet on a devious policeman’s neck and another one where Lal repeats the “Narcotics is a dirty business” line from Irupatham Noottandu.

The story, though set in Kerala, is populated with characters clearly inspired from real-life national political figures, with the writer having the liberty to twist it the way he wants. P.K. Ramdas, the Chief Minister and leader of the 150-year old IUF party, passes away, leading to questions on succession. Daughter Priyadarshini (Manju Warrier) and son Jatin Das (Tovino Thomas) are disinterested, while son-in-law Bobby (Vivek Oberoi), flush with funds from the drug cartel, is trying to wrest control. But Ramdas’s trusted disciple Stephen Nedumpally (Mohanlal) is a thorn in the flesh for him.

Prithviraj envisions all this in a grand scale, so evident in the staging of the scenes, with many of them populated with mammoth crowds. Then there are the zillion slow motion scenes paying tributes to every minute movement of the star. The many characters and parallel stories all jostle for your attention, while Stephen remains the focus all through.

The director has a grip of the proceedings in the initial half, although the compulsion to showcase those punch dialogues and superhero stunts frequently is quite palpable. Some of these are indeed a guilty pleasure. But all the political intrigue takes a back seat in the latter half, as Lucifer sets out for revenge. By the end of it, the direction seems pretty clueless, especially in a long drawn out final battle, interspersed with a never-ending, anachronistic “item dance” sequence. One wished there was a little more depth and duration to Tovino’s or Indrajith’s truth crusader character, cutting short some of the stunts.

The core theme of the story, sprinkled with pointless Biblical allusions, is that politics is a fight between evil and the lesser evil. “Idealism is dead,” says one character while another one says “Politics is comedy”, taking the same old apolitical highway. Coming amid a hectic election season, the film is no good advertisement for democracy. Rather, it seems a wish list for a flawed, all-powerful, invincible saviour.

Lucifer is almost a diehard Mohanlal fan’s fantasy come true, but unfortunately it fails to rise above that.

Between Bordeaux and Hyderabad

An international exchange programme has the potential to nudge artists to explore newer realms while presenting their impressions of a region’s people and culture. French artist Emmanuelle Leblanc spent five weeks in Hyderabad between September and October this year. During the first week, she took in the surroundings, got acclimatised to the people, sounds and […]

In 1969, a 23-year old Nalini Malani produced her first animation film Dream Houses at Akbar Padamsee’s Vision Exchange Workshop in Mumbai. Inspired by architect Charles Correa’s utopian vision for the city, the film reflected the optimism that modernism brought in the Nehruvian era. It was in the same year, that the Goethe Institut/Max Mueller […]

The king of song and dance, Rishi Kapoor had several chartbusters throughout his career. The Hindu picks five that inspired generations Source Related