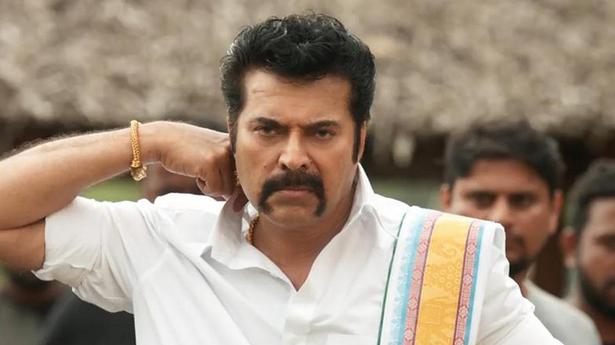 Much has changed in Malayalam cinema, since ‘Pokkiri Raja’ was released almost a decade ago. When its makers return with a sequel in ‘Madhura Raja’, they are clearly aware of the changes that have taken place, a fact evident in a long sequence parodying the ‘chain theft’ sequence in ‘Thondimuthalum Driksakshiyum’, which has been feted much for its realistic portrayals and originality.

Yet, they stop at just acknowledging these changes, and brush them away with jokes as they go by their trusted old masala playbook, hardly making any attempts to inject some novelty to the plot. They seem to be happy at reusing what was a golden goose for them at the box office.

This time around, Raja (Mammootty) is up against Natesan (Jagapati Babu) and his illegal hooch trade empire, with which he lords over an island village. But, it’s a long wait for his fans, as director Vysakh and scriptwriter Udayakrishna tries to build up the anticipation over more than half an hour, during which Raja’s father (Nedumudi Venu) and his brother Chinnan (Jai) talk often about how the scene would change once the man arrives.

Raja’s broken English and one-man army action sequences are the focus this time too, with his pack of friendly goons only serving the purpose of adding to numbers. The women have nothing substantial to do, with a “strong woman” character played by Anusree (with a perpetual scowl on her face) being the biggest caricature of them all. The script is peppered with rape jokes and an “item number.” It might not be a coincidence that some of the humour is aimed at the #metoo movement and the women’s wall.

Jagapati Babu’s character almost looks like a continuation of his turn as the villain in ‘Pulimurugan,’ – just that he has a few feral dogs for company here. The dogs repeatedly feast on human flesh, as Vysakh scales up the on-screen violence. Mammootty seems to enjoy to the hilt the role of the “humourous” superhero, which does not put much strain on his acting skills.

Raja’s entry into politics is the one “novelty” here. It also holds the promise of yet another sequel with the name of ‘Minister Raja’. How much more of the same formula can the audience cope with, remains a question. For the die-hard fans though, such questions never matter, a fact which fuels all these efforts at presenting more of the same.

Why elections are great for some stand-up artistes

In ‘The Azadi Tour 2019’, the latest edition of the political satire show Aisi Taisi Democracy that’s currently travelling to various Indian cities, the three performers get introduced to the audience as “Rahul, Varun and Sanjay with none of them sporting that significant surname — Gandhi.” The joke sets the tone for an irreverent political […]

‘Listen to Her’ review: The several faces of domestic abuse

Nandita Das’ short film brings out the patriarchy, mental and physical violence, and gender roles of parenting, experienced during the lockdown Source Related

Sundeep Kishan: My credibility was questioned

Actor Sundeep Kishan’s maiden production venture Ninu Veedani Needanu Nene (NVNN) in Telugu and Kannadi (mirror) in Tamil, which he refers to as a multi-genre film driven by fear factor, is set in the near future — the story begins in 2043. Envisioning an urban city like Hyderabad 24 years from now is a different […]