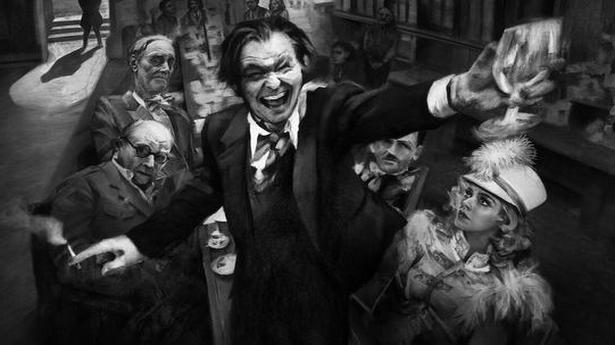 Herman J Mankiewicz aka Mank’s first encounter with William Randolph Hearst, the business mogul known for running an unprincipled press, pioneering in yellow journalism, and a politician who ran for President of the United States, on whose life Citizen Kane (1941) — often regarded by film historians and critics as the greatest American film ever made — was loosely inspired from, says a lot about the two, but what it doesn’t spell out for viewers could possibly be construed as a sharp critique on the current scheme of things that is crippling Hollywood.

In the said scene, Hearst comes across as a well-meaning investor who believes Hollywood is the future post The Great Depression, the era in which half of Mank takes place. Hearst dismisses the studio-driven model that arm twists picture-makers to “service this new entertainment”, for, he wishes to work with real literary minds like Mank, a once-seasoned and now washed up screenwriter, the man behind several uncredited classics and the one who wrote the screenplay for Citizen Kane. “Instead, what studios give? Gangster flicks and zanies. How many gangsters Americans meet in a lifetime? How many families are like the Marx Brothers’?”

“Besides mine,” comes an impromptu response from Mank. His sardonic humour and his flair for words would get him into Hearst’s inner circle, but let’s save that for later.

It is hard to overlook what clearly exists and hasn’t changed, given how Mank had a limited theatrical release, and given how “literary” minds have moved on to making their kind of films for streaming services that could well be dubbed as the studio system since the Golden Age of Hollywood.

What could also do a grave injustice to Mank is by not bringing up Kane and (Pauline) Kael, the influential film critic who wrote a 50,000-word critical essay in The New Yorker, tracing the history of Hollywood in the 1930s, examining the events that led to the making of Citizen Kane, a film she thought was a “shallow work, a shallow masterpiece”, and ultimately arguing in favour of Herman Mankiewicz as the sole “author” of the film.

In the comprehensive piece, Kael makes a fascinating observation about the interconnected lives of Hearst, Mank, and Welles and the overarching signs it bears on Kane. She writes, “The story of how brilliantly gifted men who seem to have everything it takes to do what they want to do are defeated.” It is this essay that David Fincher asked his father, Jack Fincher, to read for “motivation” to complete the screenplay for Mank as far back as in the ‘90s. And it is the nested lives of Welles-Mank-Hearst that form the central conceit, one that a self-aware Fincher would approach like a visual “essay” unfolding on the screen with actual scene headings.

Let’s get this out of the way: the opening score (music by Trent Reznor and Atticus Ross) for Mank is eerily similar to the ominous and suspenseful score with which Citizen Kane begins. This isn’t a happy coincidence, for one, the way Mank’s structured does remind you of Kane — mind you, that is not the only similarity. The alcohol bottle that rolls down Mank’s hand is reminiscent of the opening scene of the previous movie, where Charles Foster Kane (Orson Welles) holds a snow globe and utters, “Rosebud”, the dying word that would set off the events of the film, and a cheap “ploy” that film critics would come to bash. The scene where Louis B Mayer, co-founder of MGM studios, gives a beautifully banal speech, winning the vote of confidence of his employees, is a throwback to the famous speech that Kane gives at his election campaign — at least in the way it is constructed.

Like Kane, this too, is about a man who lives with the weight of memories and whose life we see in fragments, cut across two timelines: a flashback that happens in The Great Depression, when America was in a political turmoil, enraging a war between the haves and have nots, and the one that happens in the present day in Victorvielle, California, in 1940.

Following a nasty accident that would force Mank to remain bedridden for months, he is tasked with a “now or never offer” from Orson Welles, the prodigy from radio famously known for narrating The War of The Worlds. A compulsive alcoholic, Mank is left under the watchful eyes of John Houseman, one of Welles’ close affidavits, and his secretary Rita Alexander, whose surname would inspire Mank to write Susan Alexander (based on Marion Davies), Kane’s love affair in Citizen Kane. Houseman ensures that he completes the script in 60 days, while Alexander hopes that he doesn’t drink himself to death in the due process.

A seemingly simple word of advice from Houseman (“Tell the story you know”) triggers an idea for the most personal story that Mank would write. Through Mank’s eyes, Fincher revisits the individual events and figures that would inspire him to fill reams of paper; a 327-page book in the form of a “watertight” screenplay. For instance, we come to know of the story behind the mystery woman that Kane’s manager Bernstein talks about; whose face he saw only for a split-second, but enough for a lifetime. The woman in question is from the family album of Mankiewicz’s.

It is not the events themselves that are exceptional and it is not something that Fincher seems interested in. By revisiting the story of a self-destructive writer 79 years after the release of Kane, Fincher tries to make sense of the political commentary that happens within the film: the power structure of Hollywood; the callous regard the capitalists have on the Others, and how dangerously close the industry is, to shaping the beliefs of people. He devotes a reasonably long amount of time in the flashback to give us a sense of the studio culture, with shifting points of views. We come to know of how Paramount Pictures, where Mank worked for a brief time, greenlit their pictures and why Louis B Mayer believes it is the emotion that sells — “We spend over a million on films we don’t even make.”

The performances of the principal cast are brilliant, particularly of Gary Oldman (who seems to have a hangover from The Darkest Hour), Amanda Seyfried (who plays Marion Davies), Lily Collins (Rita Alexander), Arliss Howard (Louis B Mayer) and of course, Charles Dance (William Randolph Hearst), who gets a short yet effective role.

There is something austere and pristine about black and white cinema that you otherwise may not notice in colour — a scene that comes to mind is of Mank and his wife Sara spending a lazy evening at the beach. It is so evocative yet so simple that, how do I say, is equivalent to the master shot of the young Kane playing in the snow, in the background in Citizen Kane.

Like most films that go to a painful extent of trying to recreate a Hollywood from a bygone era, ending up neither here nor there, Mank, too, suffers from this syndrome. Of course, the monochrome cinematography helps in achieving a certain kind of visual output, coupled with a gorgeous production design, and gives you the feel of what a 1930s/40s movie would look like in the digital era, but it doesn’t carry the bleaching white that you normally find in black and white movies, and lacks the shadows — almost none here. But Fincher, who could be a pain in the you-know-where when it comes to scene construction, goes to remarkable lengths to bring back that old school Hollywood feeling — I absolutely loved how a few scenes had little Cue Dots, used to denote the reel markings for projectionists.

Only a filmmaker who resists succumbing to romantic flirtations over a celebrated classic could possibly disassociate himself to make the kind of film that he makes. For starters, David Fincher doesn’t even think Citizen Kane is the greatest film. Mank is, however, a wishful filmmaking departure for Fincher who has long-been accused of getting into the minds of psychopaths and sociopaths, save for The Social Network and The Curious Case of Benjamin Button.

Pauline Kael’s laboriously endless essay was sharp and matter-of-fact that held a mirror to Hollywood, but what Fincher does in Mank is give us a rare insight into what could have transpired between Mank and Welles in making what is arguably one of the greatest films. Is Mank the only true author? Was Welles extremely insecure about maintaining his reputation as the man behind Citizen Kane? Did the film paint a sympathetic picture of Hearst? You never know. But what you do know is: “I don’t think any word can explain a man’s life.” This was the philosophy of Kane, which gets revised for the better in Mank: “You cannot capture a man’s life in two hours. All you can hope is to leave an impression of one.” And the film leaves one hell of an impression.

A couple of initial reviews were congratulatory in construing the film as David Fincher’s “love letter to Hollywood”. Given the grand fashion in which Mank’s outburst — at a “circus costume” party hosted by Hearst, in whose eyes he is no more than a “parable of organ’s grinder monkey”, which echoes when Orson Welles’ looming presence casts a shadow on him, dwarfing his figure and, perhaps, his contribution to Kane towards the end — is constructed, one suspects if the intention was to show the finger, to Welles, to Hearst, and to power. Perhaps, it was the only time Mank refused to budge.

Mank is currently streaming on Netflix

South Korean director Bong Joon Ho’s Parasite, an audaciously original take on the sharp rich-poor divide and its shocking repercussions in the city of Seoul, bagged the Palme d’Or at the 72nd Cannes Film Festival on Saturday evening, while three of the four films by women directors in this year’s Competition also ended up among […]

Photographer Nemai Ghosh, the man who never missed a moment

For someone best remembered as the visual biographer of legendary filmmaker Satyajit Ray and a documentarian of the making of his astounding body of work, an interesting aspect about Nemai Ghosh was that he started off as an actor with actor-director Utpal Dutt’s Little Theatre Group in Kolkata. Arts critic and publisher-editor Samik Bandopadhyay remembers […]

Members of Hyderabad-based ‘Sri Venkateswara Surabhi Theatre’, a group known for its colourful and elaborately staged mythological dramas in Surabhi theatre tradition, find themselves at the crossroads after the Coronavirus outbreak. The primary means of livelihood for at least 50 families residing in Surabhi Colony in Serilingampally, comprising 200 artistes, is by staging plays. Public […]