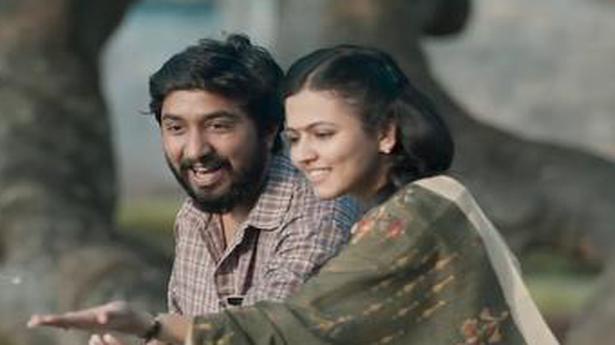 The main protagonist of the film, Manoharan finds himself obsolete when pixels replace the paint brush. Billboards and banners that once sported his creativity now opt for the air-brushed perfection of digital art. Dumped by his fiancée for his unglamorous profession and minimal income, the artist decides to upgrade himself by picking up a few lessons in Photoshop. He also plans to settle scores with his rich-and-tech-savvy rival Rahul by opening the first flex printing unit in their village.

Anwar Sadik, in his second outing after Ormayundo Ee Mukham, goes for a simple rural tale which hardly has any freshness quotient to flaunt. He also narrates it in a smooth, straightforward manner, making it more of a no-frills affair, just like the art of its hero: inherently good.

Manoharam is one of those modern-day fairytales chronicling the journey of an underdog, though told in a very modest and laid-back style. Yet the film has enough feel-good vibes to redeem it from being a dull expedition. The problem with Manoharam is that it fails to redefine the cliche or explore the man vs machine theme in a more engaging manner. It’s not an over-sweetened recipe, but lacks originality and vibrancy at many parts, while some others look a little unprofessional.

The film has warmth and the treatment is sympathetic, focusing on the travails of the hero and not allowing the storyline to stray. But it never blossoms into something far more beautiful and remains just ‘manoharam’. Though the film can be called a feel-good entertainer, you feel a little more drama and humour could have saved it from running out of steam.

Vineeth Sreenivasan perfectly fits the role of a shy, under-confident artist. His character requires him to maintain a certain passivity and he keeps the arc perfect. While Deepak Parambol, one of the most under-rated actors in Malayalam, delivers another good performance, it’s nice to see Indrans gracefully stepping into a space so far reserved for some other actors, playing Manoharan’s mentor Varghese. Aparna Das, who plays the female lead, looks like a natural choice for the role, but doesn’t make any lasting impression as Sreeja, Manoharan’s computer teacher.

The film is set in Palakkad and Jebin Jacob’s camera helps a lot in bringing in that regional air, much more than the synthetic slang used by one of the characters. Manoharam is not the kind of film you fall in love with… but one you grudgingly like for its simplicity and goodness.

In our education system, Mathematics and Art seldom meet in the classroom. But if Bengaluru-based sculptor Kalyan S Rathore is to be taken seriously, separating the two fields is a “flawed idea.” “Maths as a subject is indeed important, but when the student is too anxious or afraid of it, the beauty of its principles […]

Growing up in a small town in Rio Grande, Brazil, Jim Porto was surrounded by music. His family couldn’t afford a piano, and he decided to learn on his own at a neighbour’s place. Bossa nova, meaning new wave, was the latest fad, blending traditional Brazilian samba sounds with American jazz. Porto’s passion for bossa […]

The minds behind The Current War took the adjective ‘electrifying’ a bit too seriously. It’s a film that deals with the advent of electricity as we know it, and for some reason, a sizeable portion of the film features rapidly wonky camera work and choppy editing, as if the makers confused electrifying with electrocution, in […]