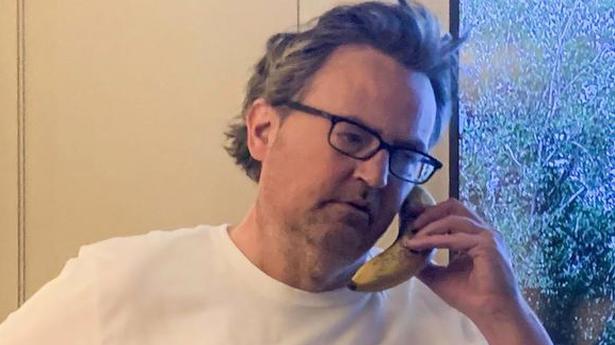 The online shop is titled ‘Could this BE any more of a Matthew Perry merch store’, borrowing the actor’s on-screen persona of Chandler Bing

“Friends” alum Matthew Perry has launched a limited edition apparel line inspired by the 1990s beloved sitcom, the proceeds of which will be donated to the World Health Organisation’s COVID-19 relief fund.

The online shop is titled ‘Could this BE any more of a Matthew Perry merch store’, borrowing the actor’s on-screen persona of sarcasm king Chandler Bing from the NBC series.

The 51-year-old actor shared the news on Instagram, posing in one of the T-shirts from the collection, which will only be available for two weeks.

“What is this, a limited edition t-shirt for charity? For two weeks only, I’m releasing an apparel collection! Proceeds will support the World Health Organization’s COVID 19 relief efforts. Link in bio. Banana not included (sic),” Perry wrote in the caption.

Products include T-shirts, with the quote “could this BE any more of a t-shirt” as well as mugs, hoodies and baseball caps with the same quote, just inserting the right item name.

Last month, the actor revealed that the HBO Max’s reunion special of the cult sitcom, which was delayed due to the pandemic, is being rescheduled to be filmed in March 2021.

“’Friends’ reunion being rescheduled for the beginning of March. Looks like we have a busy year coming up. And that’s the way I like it,” Perry had tweeted.

All six original cast members: Jennifer Aniston, Courteney Cox, Lisa Kudrow, Matt LeBlanc, David Schwimmer and Perry, are set to come together for the reunion, which was officially ordered this February.

It was a road trip without a destination: Pankaj Tripathi on working with Anurag Basu in ‘Ludo’

Meet the cast of the upcoming Netflix film ‘Ludo’, which will première on the platform this Deepavali Source Related

How UFC has resumed in the new normal: ‘The mentality comes from preparation’

‘If you are selfish, you can’t make good art’

Any cinema that Hany Abu-Assad makes under the label of a ‘Palestinian filmmaker’ will be an act of political resistance regardless of its theme, subject or genre. Born in Nazareth, and later migrated to the Netherlands, the 57-year-old is best known for films like Paradise Now (2005) and Omar (2013). He describes the Palestinian occupation […]