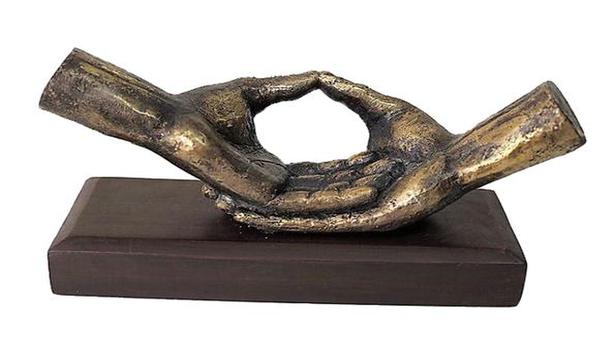 On close inspection, Kamla Ravikumar’s work in copper looks like abstract curves. But take a step back and look at it again, a human figurine performing a yoga asana presents itself.

In her recently-concluded exhibition ‘Body, Mind and Soul’ at Centre for Soft Power in Kotturpuram, the artist featured a collection of works in bronze, copper, acrylic and mixed media — all under the common theme of yoga.

While you have the dhyani mudra, navasana, chakravakasana as bronze sculptures, you have the apana asana made of copper wire. “I had tried plaster of Paris, fiber glass and bronze so far, and I thought why not try a different medium? I am also a stain glass artist and I use a lot of copper wire for that. I was playing around with one, and accidentally made a very unusual human form. That’s when the idea of experimenting with yoga poses in copper struck me.”

Kamala has been working towards this collection of yoga art since three years, but her passion for yoga started seven years ago. “I got a teachers’ training certificate from Yoga Rakshanam in Besant Nagar. That’s where I used to practice,” she says.

It was yoga, she reveals, that helped her cope with a serious illness. Though she refuses to divulge how she battled the illness (“I want my art to represent me, not the disease,” she says), she is enthusiastic about the role yoga played in it. “It gives your body discipline and relaxes you when you are going through huge amounts of stress.”

In fact, there is much similarity between the practice of art and yoga. The room at Centre for Soft Power has a calming vibe to it, helped by a couple of paintings of meditative faces, titled Zen 1 and 2. Their eyes closed, the chakra between the eyebrows pulsates, creating ripples around it, while the two backgrounds sit in contrast — one of modern geometry, in black silver and hot pink, and the other a joyful yellow.

“When I have had a bad day, and I come back and paint, it calms me down, Even more so when I am doing these paintings,” she says, waving her hand around. Right up the front is the dhyani mudra, that she practises every morning before doing pranayama.

In her paintings of matsyasana and bitilasana, human figures appear against the backdrop of the animals they are inspired by. “I hope that this will make it easier to understand and remember the poses,” she says. The paintings also incorporate tribal art styles of Madhubani and Gond. “I teach many Korean students Warli art, there is a lot of interest in this area.”

Kamla’s works can be bought together, or as separate asanas. Mail at kayarkay@gmail.com

Slug: Film Review The new Addams Family movie is short, has extraordinary animation, stunning visuals, a starry voice cast, some vanilla gags and is eminently forgettable. On their wedding day, Gomez Addams and Morticia are driven out of their standard issue creepy Gothic hang out by some ludicrous villagers who seem to have strayed from […]

Your lockdown guide to live music this weekend, from New York’s DJs to Mumbai’s rappers

Western classical music from Sydney, late-night DJs from New York, gully rap from Mumbai. This week’s list of online Live Gigs covers a range of moods for you Source Related