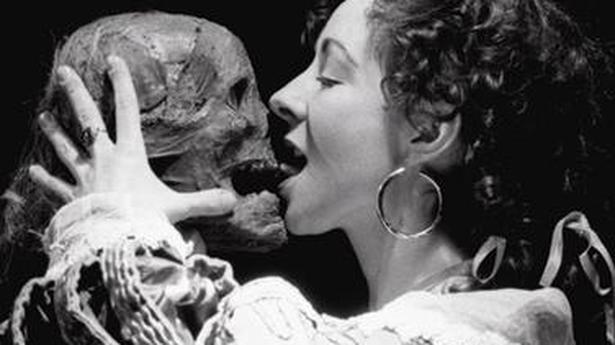 From time to time, it becomes quite imperative to clear out the book shelves and rearrange the personal library. There is dust and insects to contend with, but nothing one of those new-fangled anti-static dusters cannot handle. Some seasons in Mumbai are damper than others, so books do need airing and pampering. I like my hard covers without their sleeves, so extra care must be taken. Collections keep growing, since it’s difficult to purge anything other than those bestsellers that inexplicably pop up in your possession. Books associated with theatre are thin on the ground, so every tome is worth its weight in old. Volumes aside, there is a profusion of collectible scraps that one must compulsorily wade through — programmes, ticket stubs, flyers, and posters. Some carry the weight of historicity, others the memory of an incandescent performance, still others, a personal connection that lingers. It’s hard to throw away theatre memorabilia, even if they are not likely to appreciate in antiquarian value as they gather dust and silverfish in a musty closet.

One of the books that I could never part with is Gregory Burke’s Black Watch, which I bought after a performance of the play in a military drill hall in Edinburgh. Each line evokes the memory of a lived moment; it’s almost impossible to read the script simply as a literary piece, and not get caught up in the swirl of an experienced performance (and I did catch several shows). The exercise of reading a play always involves an overactive imagination. From the first entry to the final fade out, the mind assembles a motley crew of never-before thespians who play out the scenes in tile-shift repose, never once flubbing their lines.

Of the new books to have arrived, courtesy a dear friend who chanced upon it in a bookstore (a dying breed) and thought I might appreciate it, is David Mamet’s Three Uses of the Knife: On the Nature and Purpose of Drama. Mamet is always compelling, and the title is intriguing, although it does remind me of visually impaired rodents and farmers’ wives. At just under 90 pages, it’s a book to curl up with and finish in one sitting. That would certainly be a luxury in these attention deficit times.

Then there is the Gillo Song Book, that has just arrived by post, featuring songs from plays staged by the Gillo Repertory, and a few others. It’s an unostentatious little tome compiled by Jigna Khajuria and Janit Temkar, typed out in a handwriting font, with empty ruled sheets attached so that one could add their own songs to it with time. Theatre songs do not slip into the airwaves, but I can imagine the book to be of immense value to those young people (and some older ones) who have grown up on a steady diet of Gillo plays. Written down thus, rather than sold as a compilation CD, there is a preciousness to the words even if one cannot always remember the songs. My personal favourites are ‘Dimlivli, Dimlivli East’ from Mister Jeejeebhoy and the Birds, and ‘Falak Ara Shehzadi’ from Taoos Chaman Ki Myna — now there won’t be any reason to mangle the lyrics as I often do.

Not to be undone is the digital shelf — neatly categorised and labelled folders containing hundreds of documents. There are apps that supply a user interface that simulates a real-world library with your virtual titles, but ultimately, as you click through pages and jump across chapters, it’s never the real deal. It’s much more accessible though, even if the font’s tiny and never really looks as good as typefaces on paper. The words, of course, beyond paper or pixels, remain as valuable as ever, depending on what you pick out to read.

On my current reading list is Eroticism and Death in Theatre and Performance. It’s a seductive collection of essays, edited by Karoline Gritzner, and the cover features a woman making love to a skull. It is a depiction of Eros and Thanatos, or the life and death instincts, described as fundamental human drives by Freud. Although the essays are written by noted academics, the ideas and themes might still draw in the lay reader, because much of theatre is human metaphor, and even in such analyses, there is much to learn about who we are.

My effort is to explore new territories, says Nivin Pauly

Nivin Pauly is in no hurry. The actor does not seem to be concerned about the number of projects in his kitty. Nivin makes it clear that he looks for thematic variety while choosing his projects. While Dhyan Sreenivasan’s directorial début Love Action Drama, in which Nivin has teamed up with Nayanthara, is running in […]

COVID-19: Deepika Padukone to discuss mental health with WHO chief

With an aim to prioritise mental health during the coronavirus pandemic, Bollywood star Deepika Padukone and WHO Director-General Tedros Adhanom Ghebreyesus will engage in a discussion, the actor announced on Sunday. Coronavirus India lockdown Day 26 updates The “Chhapaak” star, who was diagnosed with clinical depression in 2014, will go live on Instagram with the […]

The Sunday Quiz: This week, it’s all about classical music