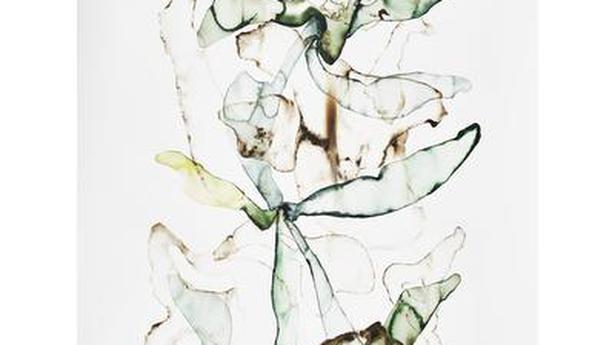 A murder of crows caw wildly, their sound resonating across the four walls of a concrete room. Outside, dappled light flows across cement flooring, strewn with bougainvillea and yellow leaves. While the image may seem like a coexistence of nature and humanity, the reality is quite different. The crows are part of a video, playing on loop inside the gallery, and is a comment by visual artist Apnavi Makanji on human detachment from “the wild”.

Combining memory, nostalgia, and the shifting ideas of home, the artist studies the time of the Anthropocene, with soil as their (Makanji would like to be referred to by the gender-neutral pronoun, ‘they’) primary protagonist. Makanji’s show, Soil as witness | Memory as wound is a visual diary that explores migration, identity, and human constructs of nature. Tapping into olfactory and visceral senses, Makanji provides glimpses of their own personal experiences, amalgamating with the viewer’s own thoughts. Jars of soil sit importantly on shelves beside 16 watercolour paintings, ready to trigger memories as the viewer dampens it with clinically applied drops of water. For this writer, the fragrance brought to mind — a combination of petrichor and the remnants of a dense chocolate loaf — making the smell rather addictive.

The artist collected these samples of soil from Geneva and Mumbai — two cities that Makanji has grown up in. The paintings use the combination of watercolour and this very soil, in works titled by their geographical latitudes and longitudes. “I can say that every sample of soil collected was from a location that made me feel safe [like home], but equally challenged me, and made me confront fear in certain cases,” shares Makanji. If the creator had their way, the gallery space would be laden with soil spread across the wooden flooring, recreating a garden of memories.

The initial idea for the body of work stemmed from Makanji’s daily walks with their mother at the Bombay Port Trust Garden, in 2011. The much-romanticised first rain in the city triggered their olfactory senses instantaneously. The mother and daughter ended up sharing the same memory but with two different perceptions of the events that took place. “This moment made me think of the erosion of memory in conjunction with the erosion of soil, and the possible fictions that tend to replace erosion,” explains the artist.

Makanji’s paintings are tethered on the edge of well-defined drawings, and fluidity of form. Using earthy tones of blue, green, and brown (made with the soil), their work is soft and calming. Like wisps of a dream, the paintings take unusual shapes the longer you stare at them. Occasionally metamorphosing into jellyfish, birds of paradise, germinating seeds, or a foetus drawing from and giving life to a growing plant. The consistency of the soil defines the shades of brown in the artwork, sometimes dense with fragments of roots, and at other times light and merging into the greens.

In the work titled, ‘46.2031279,6.1712616’, dashes of pink stand out in an otherwise earthy palette. Since the artist is keen on keeping the origins of their memories a secret from the viewer, they hesitantly agree to reveal the birth of this particular one. “The soil is from the place I saw my first cherry blossom in full bloom as a four-year-old,” says the artist who guards their privacy. Makanji further explains, that sharing their memories publicly would effectively push the viewer into engaging with the works, while being predisposed with a certain emotion or empathy toward the artist’s own narrative. They see this as counterproductive. Makanji doesn’t want their work to solely be about the remembrance of things past, but also an awareness of the passing away of life, through decaying matter.

In silence, we move around the gallery, with the artist commenting on the work only when asked. Often referring to their notebook, whose pages are strewn with plant cuttings, flower pressings, roots, and small seeds. “I’m constantly preoccupied with repositories and the ideas of archiving, conservation and propagation, almost with the obsessive approach of a botanist,” says Makanji. This obsession is coupled with questions of our true place in the universe as a species, and our negotiation with the non-human species. It’s an idea that the artist explores in the video, ‘Keedi’.

Through winding images of sand, garbage, sewage, discarded fish parts, carcasses, keedis, and hovering crows, Makanji makes us aware of a macro ecosystem in the midst of our daily life. Shot over three years at the Bombay Port Trust Garden, the artist follows creatures like ants navigating the same space that human beings walk in. As writer Faisal Devji puts it in the exhibition note, “She allows us to see the beauty in our own afterlife — the life of our byproducts that continues without us in unplanned and unexpected metastases and metamorphoses.”

Makanji’s work is provocative as it makes us think about the millions of microscopic lives drifting in and out of the spaces we occupy. The work challenges long-standing arguments of what defines borders. Makanji introspects on humanity’s rigidness that makes us ignorant of the smaller life forms that are subjected to our carelessness. The artist sums it up by saying “I cannot come to terms with the idea of home within any given nation state or defined country. Yet I feel at home in every crevice, tree trunk, shrub, forest, jungle, and natural body of water that I encounter, wherever it may be.”

Soil as witness | Memory as wound is ongoing at Tarq, Colaba, until April 27

Your lockdown playlist, put together by The F16s’ Abhinav Krishnaswamy

The melodic, the macabre and everything in between. This week’s Playlists by The F16s’ guitarist are an exploration of sounds, from hypnagogic pop to acoustic indie Source Related

‘If you don’t have vision that can justify the action, it’s a disaster’

‘Magical’ is how director Siddharth Anand describes the first time Hrithik Roshan and Tiger Shroff faced the camera together for Yashraj Film’s War. “It was in Italy and we were shooting an action scene. You had crew of 130 people just waiting with bated breath for that moment to see these two big stars walk […]

At first glance Rima Das’ Bulbul Can Sing appears to be carrying forward from where her much celebrated Village Rockstars left. Like the former, it is rooted in the daily rhythms of rural Assam. Her camera is in no hurry, it pauses and lingers long on the landscape — the ponds, the trees, the leaves, […]