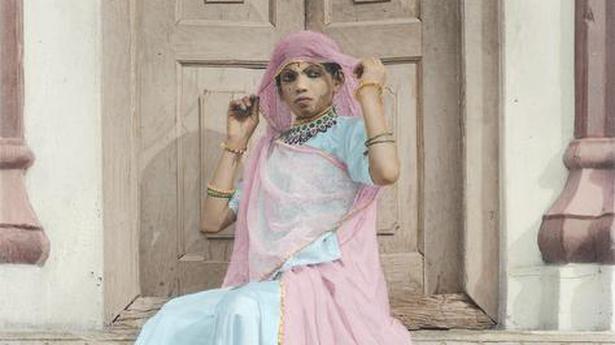 Pastel hues and mellow light waltz in stagnant frames. Flitting in the background and foreground of pinks, blues, yellows, and greens, humans, and non-humans make their presence felt. They stare back, as if behind the viewfinder. The prints on display, ambitiously narrate the Ramayana. In both analogue, and hand-painted photographs, Paris-based photographer, Vasantha Yoganathan condenses a 24,000 verse poem into a series of images, curated from his published books about the great Sanskrit epic.

Between reality and imagination

The stills are a contemporary reimagining of a tale that has been retold numerous times, in several forms. “I wouldn’t have started the project if there was only one version of the Ramayana,” says Yoganathan, unconsciously taking on the stance of the protagonists in his frames. The artist steadily walks across his creations, narrating the germinating thoughts that formulated his ongoing exhibition, A Myth of Two Souls. Merging documentary, fiction, and mythology, Yoganathan’s photographs use landscapes, still life, and staged scenes to recreate Rama and Sita’s footsteps.

The photographer’s first encounter with the epic was during his childhood in Grenoble, France, where he soaked in the Amar Chitra Katha version belonging to his Sri Lankan father. However, Yoganathan’s real comprehension of the Ramayana and its layers, only began in 2013, during his visit to India. With a cursory understanding of how entwined the analogies with the epic were with everyday life in India, Yoganathan set out to explore the geographical locations mentioned in the epic. It was his way of narrating a religious text through the eyes of an atheist, balancing worlds between physical reality and the imagined.

Through seven books on various chapters of Rama and Sita’s life, Yoganathan explores the story riddled with abstract concepts like love, duty, violence, loyalty and divinity. The mellifluous images are divided into four existing books, Early Times, The Promise, Exile, andDandaka, with three more in progress. It’s an idea that succeeds at creating a palette, which keeps the viewer guessing about whether the stills were made five years or 50 years ago.

Traversing through Rama and Sita’s childhood, their romance, the painful exile, and the happenings in the forest, Yoganathan breaks the story down using colour to enhance his vision. Even though the distinction isn’t apparent, the chapters are divided into yellow, red, orange, and green, with the latest one following shades of blue. “It’s the first time our characters are seeing the sea,” explains Yoganathan, while talking about the chapter, The Quest.

The artist’s quest has led to him traversing 3,500 miles, across UP, Bihar, MP, Maharashtra, Andhra Pradesh, Odisha, Chattisgarh, Karnataka, Tamil Nadu, and Nepal, retracing the story’s route from north to south India. Yoganathan spent three weeks in Ayodhya without speaking a word of Hindi, and relying on sign language to navigate through the space. He later took many trips with an assistant, in search of visual metaphors that could fit into his narrative. Eventually he moved onto creating staged portraits with people encountered on the streets.

In one of Yoganathan’s favourite photographs, ‘Rama combing his hair,’ a young boy is seen in a crisp white kurta, doing exactly as the caption suggests. The locals make the narration of the chapters a lot more authentic, and the photographs don’t attempt to look natural. We can see the rawness of the characters, who have been stopped in the streets and requested for a pose. “I was working more as a director than a photographer,” shares the artiste.

In another one of his favourites, ‘Longing for love,’ a fisherwoman is seen pulling nets out from the sea, which might be a mundane task for her. Here’s where he saw the challenge, “How do you photograph a scene that has been shot so many times, and avoid it from being a cliché? For me, this image goes beyond the documentary aspect,” he elaborates.

Since Yoganathan was using a large and medium format camera to make his images, he felt more invested in living the moment, rather than just shooting it. “You have limited frames, it’s expensive. You’re always thinking, is this frame worth it?” he states.

Being unable to see the photographs he was making during his lengthy travels, made the entire experience a lot more vivid. Yoganathan used both black-and-white, and colour rolls to create his imagery, but brought about a conscious twist to the monochrome negatives.

In 2015, Yoganathan’s path crossed with Jaykumar Shankar, who hails from a family of painters engaged with the art of hand-tinted images. It began a collaboration based on soft aesthetics, and similar sensibilities. Yoganathan sent a batch of black-and-white prints to Shankar, who had full freedom to paint them as he pleased. Surprisingly, both artists steer towards the same colour palette, making the works ebb into the genre of magical realism. This is clear in colourful works like ‘Magic Jungle,’ and ‘Twin Wings,’ that stand-out as largely fantastical. The latter is a scene of fishing nets, placed as though they’re stretching the light that encompasses them. Photographed at the border of Nepal, in a town called Valmiki Nagar, the image is a depiction of how fiction and reality merge. “This is where Valmiki wrote the Ramayana. If you go on a four-hour trek in the jungle with a guide, you’ll be taken to what is believed to be his hut,” shares an amused Yoganathan. In certain photographs, such as ‘The Sentinel,’ viewers are suddenly given a jolt of reality with modern day signage. Thums Up is advertised on a wall beside a fort. In another image titled, ‘Ravana fighting Jatayu’ a local man wears a T-shirt representing Jatayu, the demi-god who takes on the form of a vulture. If one wasn’t aware that the photographs spoke of the Ramayana, these images could pass off as dramatic scenes from the daily lives of locals.

Yoganathan photographed through various seasons- summer, monsoon, and winter. This is apparent in his photographs ‘The Crossing,’ and ‘Luva exploring the River’s bank,’ where the viewer can almost feel the mist settling in one’s eyes, or the sudden gust of wind on a scorching hot day. It’s the play between Yoganathan’s prints and Shankar’s paintings that cannot be distinguished from one another unless the viewer looks closely.

Photography for Yoganathan, is a lonely profession. It was his collaborations with writers Anjali Raghbeer, Arshia Sattar and Shankar that made him feel otherwise. It brings to mind a quote from writer Hanya Yanagihara’s piece in The New Yorker, “If love belongs to the poet, and fear to the novelist, then loneliness belongs to the photographer.” It’s a thought that encompasses the aspects of an ancient tale, where love, fear, and loneliness, eventually lead to the victory of good, over evil.

A Myth of Two Souls is ongoing at Jhaveri Contemporary, until May 4.

Like vintage wine, the music of Goopi Gawaiya Bagha Bajaiya (GGBB) — the animated feature film in Hindi based on Upendrakishore Ray Chowdhury’s classic, Goopi Gyne Bagha Byne — has a texture that is earthy, balanced and immersive. “We must tell you that the music began brewing in our heads nearly eight years ago,” says […]

Films are alternate realms. It is the distinct feel generated by shooting locations should you ever walk into one of them. Sample this: It is not uncommon to stumble into temple festivals (read: koil thiruvizha) in Chennai. But how often would you come across one where attendees look like they have been transplanted from the […]