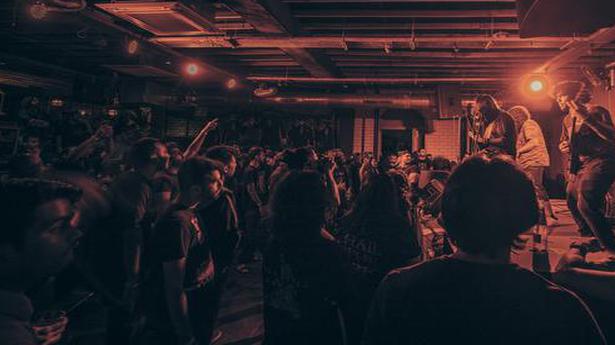 A metal concert was held at The Moonshine Project earlier this week to celebrate the ever-growing love for metal music. Abbas Razvi who organises a lot of music events in the city was keen to feel the pulse of metal music lovers. “Not every place is eager to hold metal music events. The Moonshine Project encourages a lot of new talent and all genres of music. We had four bands performing in the concert,” said Abbas.

The bands that performed include Mumbai-based Death By Fungi, followed by Hyderabad-based Raid and Apophenia. The fourth band to perform is Hyderabad Metal Project which is a collection of independent musicians or dormant bands that had about 15 musicians playing various originals numbers. Each band played for a minimum of 45 minutes with different sets. And, of course, what is any metal showcase without high-octane lighting and stage effects? This event was certainly no different.

This gig also kicked off Death By Fungi’s new album release tour. “Their new album is called Die in Bombay,” added Razvi, who feels the culture of playing covers by bands has slowly giving way to bands playing original music.”

An ardent metal music fan and a metal musician Syed Mohammed, who performed after a 13-year break, said he was glad to see large crowd turning up. “The quality and quantity of the audience has improved over the time. Having been a metal musician I totally enjoyed every moment of being on stage after a long lull. The other bands who played were very talented. This kind of an event was organised after a long time and it was totally worth it. Bands playing original music is the biggest change.”

Syed also added that the bands played a gamut of genres including progressive metal. “The knowledge of sound and production has greatly improved in local bands,” he concludes.

Heralding jazz, looking for the blues

For Mumbai’s jazz lovers, here comes another celebration, with the two-day World Jazz Festival being held at the St Andrews Auditorium, Bandra, on February 22 and 23. Since the National Centre for the Performing Arts, Nariman Point, has its International Jazz Festival in November, this is an ideal destination for suburban audiences. The event is […]

The title of Rajinikanth’s next film has been revealed to Annaatthe. Directed by Siva, the film is expected to a family-action drama on the lines of Rajinikanth’s earlier hits like Padayappa and Arunachalam. The superstar’s last film was Darbar with AR Murugadoss which didn’t quite set the box office on fire. After having acted with […]