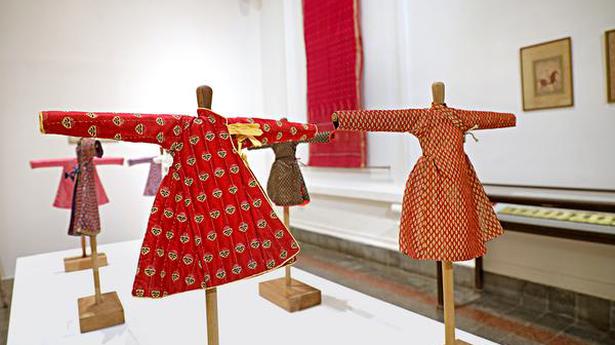 Textile artist Geeta Khandelwal, 80, smiles as she explains the fine detailing of an ornate chogha on display at the Dr Bhau Daji Lad Museum, “I’ll be happy if you’re able to find a mistake,” she says. The loose, cloak-like garment, worn by Indian royalty, features hand embroidery in gold threads, sequins and French knots. Typically knee length, the original garment would be a few feet long. Khandelwal has recreated its miniature version. “The virtue of a miniature, be it a sculpture or a dress, is in its fine details and craftsmanship. It holds more value because it’s easy to spot the defects right away,” she says.

The ongoing show, Classic Miniature Costumes displays 40 such. On display are miniatures of long robes such as jamas and angarkhas along with a few sherwanis and kurtas. They are inspired by the ceremonial and everyday attires of the maharajas of India from 1850 to 1950.

“Back then, the male attire was far grander because the kings were public figures while women were restricted to their quarters. A lot of detail went into embellishing their armour too,” says Tasneem Mehta, the museum’s managing trustee and honorary director. Khandelwal adds, “Today, men’s garments are largely restricted to sherwani and kurta. I wanted to go beyond that.”

Mumbai-based Khandelwal has been working in the field of textiles for over 50 years. A passionate quilt maker, she has participated in exhibitions around the world and authored a book titled Godharis of Maharashtra: Western India. “But I hadn’t made a miniature costume earlier, so this felt like an impossible endeavour,” says Khandelwal, who trained herself through books and online research. For reference, she used a publication titled Indian Costumes In The Collection Of The Calico Museum Of Textiles by BN Goswamy and Kalyan Krishna (1993). It includes patterns by Tarla P Dundh, offering details about measurements, colours and types of fabrics used. Working on this collection for over three years, she has meticulously recreated every costume to scale.

Khandelwal has hand-stitched each piece in collaboration with master tailors and embroiderers. She has largely using the vintage fabrics from her personal collection. From fine silks and brocades of Varanasi to muslin of Bengal, hand-block prints of Gujarat and Rajasthan, and chikankari embroideries of Lucknow, the fabrics reflect the diverse Indian materials used since the early 19th century. A 200-year-old jamavar fabric from Kashmir is also on display. “It was gifted by a friend but it had become really frail. The Indian climate makes it difficult to preserve textiles,” she rues.

The exhibits also include vintage irons and Singer sewing machines belonging to the artist. “The idea is to inspire the fashion world and get the younger generation to discover India’s rich textile traditions and the finesse of these costumes,” says Khandelwal, who now plans to work on a collection inspired by the Japanese kimono.

An Instagram-based artist turns gender roles on its head

Artist Miranda Tacchia had difficulty smiling as a child. “Unless circumstances warranted jubilation, I just didn’t think it was necessary most of the time,” she says. This is the general tendency of the women who populate the 33-year-old artist’s Instagram page, @mrmtacchia. It is filled with women with strong eyes and strong bodies. They are […]

Artists paint their perspective of the lockdown

“It is a small but positive step to motivate artists,” says artist Ramana Reddy. As the president of Hyderabad Art Society, Ramana has launched a new initiative ‘Paint Your Thoughts — Theme: Corona’ for artists experiencing a new life during lockdown. The idea shaped up a few days ago when he pondered on art’s contribution […]

Ahead of the 2019 Lok Sabha elections, Hema Malini’s on-the-road campaign in Mathura yielded some of the best memes of the year. Among them, my favourite, was Malini crouching under a haystack, held by an old frail lady. Shimla Mirchi is the cinematic version of that meme, where Malini is the film and the old […]