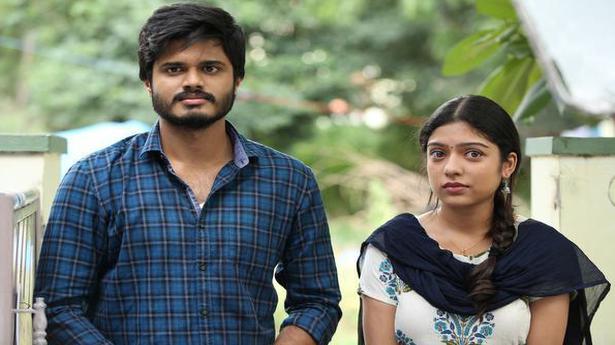 Middle Class Melodies, streaming on Amazon Prime Video, is the directorial debut of Vinod Anantoju in Telugu cinema, which is mostly perceived to be glamorous and larger than life. We hear conversations at a housewarming function as the titles roll. The point of discussion is why the cow hasn’t yet taken a dump, which is considered an auspicious beginning. The first visual we see is the cow doing its act. Not exactly glamorous, is it? Soon, we also see an elderly lady being hoisted up on a chair with harnesses to the first floor, just like other pieces of furniture. The scene isn’t meant to poke fun at her plight. Everyone wants her to go upstairs safely, and cannot think of a better solution since she cannot take the steep stairs and they don’t have the luxury of a ramp.

Vinod sets the tone for a close-to-reality portrayal of the many facets that make up middle class families in Kolakaluru near Tenali and Guntur, where someone discusses Trump’s antics at a tiffin centre or a group of people gleefully go to witness a brawl.

The hero of this tale is Raghava (Anand Deverakonda) who plays a guy whom you are unlikely to notice in a crowd. He thinks he makes the most delicious ‘Bambai chutney’ and that it is under-appreciated in Kolakaluru where his father Kondal Rao (an excellent Goparaju Ramana) runs a tiffin centre. Raghava wants to open a tiffin centre of his own in an urban space. Not Hyderabad, but the nearby Guntur.

Raghava’s days are incomplete without run-ins with his father, who feels the son is chasing a utopian dream given the family’s financial constraints. Middle Class Melodies is a lot more than one man’s dreams coming to fruition. In a place like Kolakaluru, it takes a few families to make someone’s dream come true.

We are also introduced to the love story of Raghava and Sandhya (an expressive Varsha Bollamma). There’s enough room to show the complexities of both their parents, without making them look like caricatures. A mother who brokers peace between a father and son is often a one-note characterisation in many films. Here, the mother is affectionate and practical. Elsewhere, another mother points out that her husband has gone too far driven by his greed and nudges him to make amends.

There’s a lot of warmth with which Middle Class Melodies is narrated, and even those characters with limited screen time are allowed to bloom. Take Divya Sripada, whom Raghava’s friend (Chaitanya Garikipati) takes a shine to, but holds back because their astrological stars aren’t aligned! She would have had no qualms if he hadn’t liked her, but she doesn’t take it kindly that he rejects her because of her date of birth.

Anand plays the small town guy with an effortless charm, mirroring the vulnerabilities effectively. He isn’t a hero, cinematically speaking. The hurdles in his path to success are also not cinematic. Financial struggles aside, he worries about his tiffin centre being hidden from view by a large mango tree and a vacant land in the vicinity turning into a dump yard. The solutions to these issues are smart and believable.

Varsha is impressive, yet again. Watch her as she’s almost moved to tears when she tries to recharge her phone at a store or when she fumes that neither her father nor the man she loves bother to know what she likes. Chaitanya, Goparaju Ramana, Surabhi Prabhavati and a host of others deserve a mention.

The region-specific milieu that comes alive beautifully on screen is reminiscent of Venkatesh Maha’s movies as well as some recent Malayalam films. Vinod’s ode to Guntur and Tenali is appreciably helped by Sweekar Agasthi’s music.

Love, in the time of the Mughals

“Dil-e-nadan tujhe hua kya hai, aḳhir is dard ki dava kya hai?” recites kathak dancer, and founder of the Sufi Kathak Foundation, Manjari Chaturvedi over a phone call on a languid afternoon. With a gentle voice, and a frenzied passion for Mirza Ghalib’s poetry, the dancer recreates the atmosphere of Ghalib’s writing, that continues to […]

‘It’s Okay to Not Be Okay’ review: K-drama revels in its nuanced writing and strong performances

Among the top trending shows on Netflix, the ongoing romance-drama would benefit from more discussions surrounding mental health in the upcoming episodes Source Related

Mumbai: A metropolis in transition

This weekend, if you visit Gallery MMB in Kala Ghoda, you’ll rediscover Mumbai as the city of dreams, arrival and dystopia through visuals and text. These, however, aren’t the oft-seen images that romanticise south Mumbai or frame the street vendors. In a drawing, an aspiring actor sitting in a cafe stares at his phone, probably […]