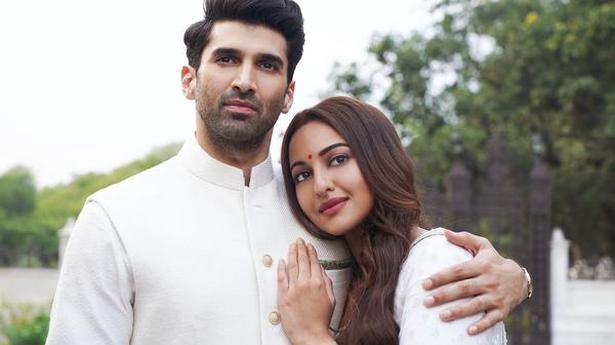 “Everything just fell into place,” says actor Sonakshi Sinha about Abhishek Varman’s Kalank that ushers in what could potentially be a great year at the movies for the 31-year-old actor. Sinha has an untitled Shilpi Dasgupta film lined up for August and Mission Mangal and Dabangg 3 will follow later in the year. She recently also signed on for Abhishek Dudhaiya’s Bhuj: The Pride of India which is based on the 1971 Indo-Pak war.

But, for now, Sinha is full of beans about all the hard work put in by the entire cast and crew into Kalank, the massive, partition-era, ensemble film and is confident that it will pay off. It matters a great deal for Sinha to have been a part of, “such a strong drama, alongside fine actors, and playing a role that challenged [her]”. Sinha’s plays Satya, a sacrificing character who believes in holding the family together. “Family for her always comes first and often trumps her own happiness,” she shares. Despite being confined to the household and trapped in the tradition and mores of the times, Sinha found her to be a woman of substance.

But is such a character still relevant today? Perhaps not in an urban, liberal setting, but Sinha feels that women in smaller towns might see themselves in her character Satya, who emerges as a strong, assertive character despite her limited and limiting circumstances. As an actor, the challenge was to, “grasp the emotions that a girl like Satya would have felt in that period.”

How does Sinha tackle her roles? Does she have a different set of acting muscles for drama and comedy? “My process is that I have no process,” she laughs, “I reach the set, read my lines and act when the camera comes on. My process won’t change from a Dabangg to a Kalank. I am spontaneous and that’s the only way I can act.” The actor prefers to just talk to her directors and understand what they are looking for, and then processes the characters in her own way.

She calls Varman a very thorough director, the kind who knows exactly what he wants. Sinha thinks that despite being just one film old, Varman’s achievement with the film’s look, feel and pace is tremendous,. For her, the magnificence and magnitude of the set were unparalleled and is sure that Varman’s world is going to blow everyone’s mind.

In Kalank, Sinha worked with most of its star-studded cast for the first time, except her Son of Sardar co-actor Sanjay Dutt. “It was really nice reuniting with [Dutt]. We are really fond of each other, and he’s seen me grow up,” shares Sinha. She describes her other senior colleague, Madhuri Dixit “ma’am”, as someone she has always looked up to for the kind of actor and dancer she is. “How beautiful is she! I am just happy to be in the same film as her!” Sinha gushes. Alia Bhatt, Aditya Roy Kapoor, and Varun Dhawan have been Sinha’s friends, so it was “great” to finally work with them. Sinha and Bhatt are full of praise for each other: “In such a short span of time, she has done such a great body of work. [Alia is] such a fine actor, and despite her being younger, I look up to her. When we are in the same frame, we just feed off each other’s energy and want to do better. She brings out the best in her co-actors,” says Sinha. Bhatt is reciprocal in her praise. She shares that even when, for some technical reasons, she couldn’t stand next to Sinha for cues, the latter still gave a terrific performance. “She can act to a wall. She’s that good,” says Bhatt. Sinha maintains that it’s ultimately in the teamwork that make a film that one has to be accommodating as an actor, “I have worked with Salman Khan who lands up on set and does his lines and also Ranveer Singh who wants to be in the zone of the emotion he has to convey. If Aditya [Roy Kapoor] wants to do a line rehearsal, I do it.”

The teaser of Karthick Naren’s Mafia was released on Monday evening. The visuals promise an engrossing cat-and-mouse game between Arun Vijay and Prasanna, and the ‘Chapter 1’ added to the poster tantalises the promise of a franchise to come. Mafia is touted to be a gangster drama, with Arun Vijay in the lead and Prasanna […]

The future is rock

Is rock music stagnating or fading? Well, this was the question asked till a couple of years ago, when most youngsters were taking to hip-hop and electronic dance music (EDM). While people did go in for older rock acts, there was hardly any good new material. No Metallica or Linkin Park or Radiohead. Making waves […]

The unforgiving afternoon sun flits through the trees, as small groups trickle into the expansive Cholamandal Artists’ Village, hoping to catch a glimpse of what makes the village exclusive. A hotbed of arts, the self-governing establishment, set up by KCS Paniker in 1966, is caught in a time warp — away from the noise of […]