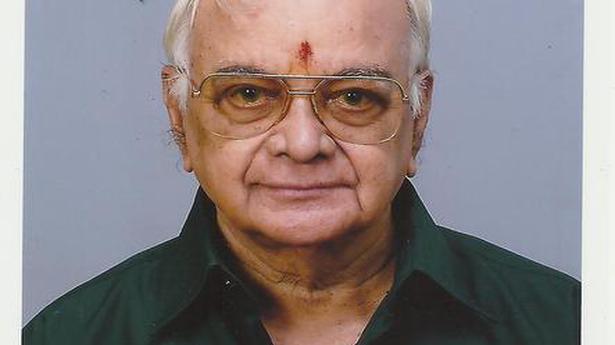 Film producer N. Krishnaswamy, who produced films under his banner Bala Movies, died in the city on Tuesday. He was 95 years old and is survived by two sons and a daughter.

Mr. Krishnaswamy was a student of the first batch of the film institute and studied cinematography and sound engineering. His initial work was with Gemini Studios as an assistant cameraman for films such as Chandralekha and Avvaiyar.

His first production, the 1956 award-winning Tamil film Ondre Kulam, was named by former Tamil Nadu Chief Minister K. Kamaraj and dealt with untouchability as its central theme. Among his other films as a producer were the Sivaji Ganesan and Sowcar Janaki starrer Padikadha Medhai.

He also went on to produce documentaries and shows under his banner Enkay Visions for television and among them were the popular TV shows Mel Maadi Kaali and Sir, Post. Mr. Krishnaswamy had several firsts to his credit and founded the Cine Technicians Association (CTA) of South India. In a 2001 interview to The Hindu, he said that though the working conditions of big film studios were good, the same could not be said about the smaller ones.

With a keen interest in writing, he was the editor of the fortnightly Kumbakonam Times. His family said that his funeral would take place at 10.30 a.m. on Thursday.

Singer and dubbing artiste Chinmayi Sripaada, who has been at the forefront of the #MeToo movement in the Tamil film industry, took to Twitter on July 27 to express her resentment against comments passed on a recent episode of season three of Big Boss Tamil. She retweeted a video clip shared by a user, @sindhu0, […]