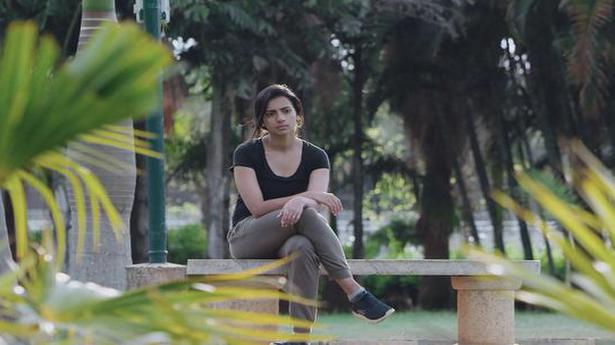 Sruthi Hariharan, who hit the headlines last year for her #MeToo allegations against actor Arjun Sarja, is back in the news. This time the news is good and she has reasons for a double celebration. She gave birth to a baby girl on July 26 and is enjoying motherhood. And she won the Special Jury Award at the 66th National Awards for her performance in Nathicharami, which bagged five National Awards. The citation of the award announced by the jury read, “For the complex and nuanced portrayal of a new age Indian woman”.

Ask her what this National Award means to her and she responds, “When Nathicharami was launched, the team focused in the issue of women’s sexual desire among other things, which are considered too bold for mainstream film in India. The situation the film explored is not something many will easily relate to. We also felt it may get some kind of negative feedback and were apprehensive. But despite that, throughout our film making journey, we remained honest and spoke out loud. Once the film released, we were hopeful of the audience receiving it.”

“When the film was released on Netflix, it started trending and became one of the most viewed Kannada films on that platform. At the same time, the jury honouring the film in five categories validated the efforts involved in its making. Mansore, the director, put his heart and soul into making this film. The award means a lot to me and motivates me to continue to do what I have been doing.”

Does this award mean she will get more work? “I don’t think an award guarantees work. It is just a recognition for the work done. In my case, I lost a lot during the past year and was beginning to feel I am running a listless race that was unnecessary in my life. However, what came to me with Nathicharami has instilled confidence in me,” she asserts.

“The fact is, I have not received a single offer in the last year, which is uncommon in my career. While some filmmakers wanted to work with me, producers and financiers are apprehensive. Their apprehensions point to the fact that they are scared about a strong woman who speaks her mind. I don’t consider this as a personal affront and take that as an opportunity to create work for myself. Just because I do not get work, doesn’t mean I cannot work. An artiste need not be given work. He or she will have to create work for themselves. I got the time to explore other avenues in filmmaking,” she says and adds filmmakers like Pradeep Varma and Jayatheertha are waiting for her to return to work after her maternity leave.

Sruthi also shares that many from the Kannada film industry called and congratulated her for her win. While thanking them for their gesture, Sruthi says; they did not support, when required. “The time of speaking or remaining silent is their prerogative.”

Ajith advised me to get stunt training: actor Sampath Ram

When Sampath Ram traded in his credit card collection executive’s job after director S Shankar personally cast him for a role in Mudhalvan (1999), he thought his life’s wildest dream was about to come true. “I was to play a sub-inspector. I thought that it was going to be my big break,” says the 48-year-old […]