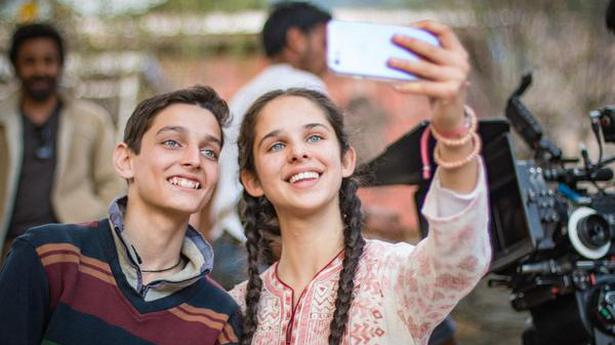 The past few weeks have seen two films pivoting on the missing men and half widows of Kashmir. Hamid, where the issue gets seen through the eye view of an eight-year-old child, is moving in its simplicity and humaneness. No Fathers In Kashmir looks at it through two teenagers-a British Kashmiri girl and a local Kashmiri boy-who share the trauma of missing fathers. In the former film, politics takes a backseat to focus on the human repercussions of political machinations. In No Fathers… Ashvin Kumar tries to bring in the humaneness and politics in equal measure on screen.

There are some things that stand out. A single mother trying to move on after the disappearance of her husband is a rare trope. Zainab (Natasha Mago) wants closure while those around her consider it “inappropriate” for her to be living and travelling together with another man. Her own dilemmas, the hurt and hesitation yet concomitant acceptance of her decision by the anguished in-laws (Kulbhushan Kharbanda and Soni Razdan) are well realised and heart-warming.

No Fathers In Kashmir

The crux, however, is the unique bond between her daughter Noor (Zara Webb) and Majid (Shivam Raina). It’s a relationship that is poignant in the shared destiny (of missing fathers) and the betrayals and guilt it has to confront. What irks are some clichéd and uni-dimensional portrayals-Kumar’s own turn as a hardliner gets too muddled and broad as does the filmi villain-like army officer interpreted by Anshuman Jha. The nuance goes totally missing here.

One also felt extremely incredulous in finding a Kashmiri teenager posing as a “terrorist” for a Facebook page. While an unthinking “selfie with a terrorist” might be okay to come from an uncaring British kid, such dodgy, perilous fun and games are hard to imagine coming from the embattled lives caught in the tinderbox that is Kashmir.

Kumar comes with a solid background in documentary filmmaking and has sound grounding in the politics of the State (Inshallah, Football and Inshallah, Kashmir), the reason one would have expected a far more searing and incisive account in the film than what one eventually gets to watch.

No Fathers In Kashmir took me back to Amir Basheer’s 2012 film, Harud. Basheer’s film was a far more evocative ringside view of the valley-in its severe silence, the autumnal, bleak landscape and the haunted faces of its people, restlessly searching for those who disappeared on them. Not to forget Iffat Fatima’s documentary Khoon Diy Baarav (Blood Leaves Its Trail), perhaps the most intense and authoritative work on the thousands of unexplained disappearances of Kashmiri men. Fatima’s film is particularly haunting in how it documents the State’s women, who have been using memories of their loved ones as tools of personal and political resistance.

Penn veeram (women’s strength) is a trope that poet Subramania Bharathiyar often wove his beautiful prose around. The complex psyche of women has always been a point of interest to the legendary poet. So, it is not surprising that his poems are universal and reflective of current society. But how does poetry, as a medium, […]

‘Acting gives me a tremendous high’

Shefali Shah’s 20-year-long career stands out for its staggering variety of roles. Shah dancing in ‘Sapne Mein Milti Hai’ in her seven-minute role in Satya (1998), as Ria Verma in Monsoon Wedding (2001) which included a stunning scene between thespian Naseeruddin Shah and her, in which she held her own. In 2015, her turn as […]

The biggest Kollywood battle: No, it’s not ‘Thala’ vs ‘Thalapathy’, but Raaja vs Rahman