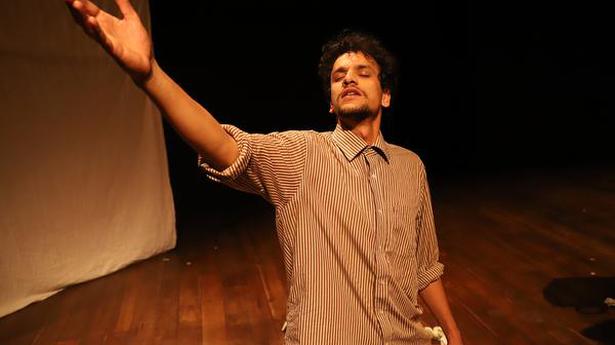 A recent play that gets its blurb just about right is Man Maana Square, which dubs itself “a bittersweet exploration of our primal instincts [by] four players [with] countless curiosities.” The play, from the Mumbai-based Red Mark’s Actors Studio, all but swept the board at the last edition of Thespo, winning four awards including — quite deservedly it would seem for those who’ve only recently ‘discovered’ the play — ‘Outstanding Ensemble’ and ‘Outstanding Play’, in keeping with the festival not qualifying its awards as ‘Best This-or-That’, a non-hierarchical semantic choice espoused by prize-givers worldwide, including the Emmys. Adding to their haul were acting gongs for Bhupendra Singh Jadawat and Pallavi Jadhao who, along with Monika Panwar and Ujjwal Kumar, prop up the four corners of the eponymous ‘square’, which might also allude to the mofussil piazzas where much of the play’s light-hearted shenanigans play out full-bloodedly.

This intrepid bunch of young actors are all recent graduates of the National School of Drama, and Man Maana Square is a purely collaborative effort, with all four players share writing and directing credits equally. From seemingly innocuous childhood set pieces to the darker denouements that beset adult living, the play runs a gamut. Love stories across social divides, sexual trysts between young and old, less than shameful ‘explorations’ between youngsters playing ‘ghar ghar’, and a homosexual encounter or two, all add to a tapestry of experiences that might well make it seem that sex in Middle India is finally out of the closet. The spoken language is breezy and conversational, but paramount to the storytelling is the ingenuous visual grammar — full of the telling metaphors and hijinks that we have come to expect of a well-realised physical theatre piece, one in which elements of European devising are interwoven into Indian, even ‘filmi’, storylines that are at once perfectly archetypal and strangely subversive. Yet the presentation is raw and unfiltered, and even in its most inventive, the play does not give off the vibe of mere artistry on display. This lack of finesse or artifice allows Man Maana Square to stay true to the small-town ethos it attempts to encapsulate, although the reliance on some mainstream clichés — a full-length romantic song, for instance — stunts its power somewhat.

Of course, its actors prove more than up to the challenge of showcasing themselves as self-possessed performers not short on rigour or vim. It must be said that the play appears to be working against liberal expectations at times, and while this might allow alternative world-views breathing space on a single speakers’ corner, it does also reveal its lurking heart of conservatism.

In one narrative strand, the liaison between a bicycle repairman (Jadawat) and an impressionable young girl (Panwar), comes to a grisly end. Panwar, who gave a strong account of herself as the young widow of Agarbatti, brings a similar mix of submissiveness and stoicism to this part, but it is hard to take the story as anything more than a cautionary tale that feeds certain stereotypes, particularly because the two lovebirds appear to belong to different religions. On another occasion, Jadhao launches into a spiel that is a call of arms to all women who have been at the receiving end of unwanted sexual overtures from a salivating male populace. This is a diatribe that is meant to be ironic, because it comes right at the end of an interlude in which she plays a hormonal teenager who ‘seduces’ the neighborhood lad visiting her house to watch television. Jadhao and Jadawat are in good form in this delightful set piece, buffeted by 1990s chartbusters, but its contextualisation as an argument against #metoo feels little more than a simplistic nod to male anxiety.

The play is an exploration of consent behaviours and of nuanced power dynamics. And while it’s important to factor in the grays in this murky business — with the guileless and refreshingly ungendered childhood encounters held up, perhaps mistakenly, as beacons of ‘how it could’ve been’ — it is important to understand the societal contexts that one is incensed to challenge (an argument that goes both ways). When the cast hold-up placards emblazoned with ‘Guilt’, it seems more glib than revelatory even if it cannot be said that all their missives have gone awry. Ultimately, these quibbles do not take away from the mix of humour and emotion that makes Man Maana Square a compelling watch and a worthwhile investment of time for the casual theatregoer.

‘Wonderful 101’ review: this remastered video game gets a second chance to shine

In this exclusive rapid fire round with The Hindu, the director of Vijay Sethupathi-starrer ‘Super Deluxe’ converses with Ramya Krishnan, another key character in the film. From cooking ‘vatha kuzhambu’ to discussing about Vijay Sethupathi’s acting techniques, the two artistes get candid about the film and their process. Source Related

From the Archive: Making a mark as accompanist

For the Chennai music season 2019, The Hindu brings to you a series of articles from our archives on interviews with rising artistes in 1990s who are now some of the biggest names in Carnatic music. Today, an interview with violinist A. Kanyakumari “In my early years I was not at all interested in music. […]