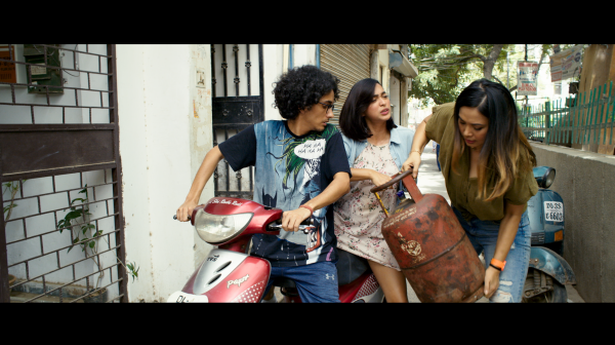 In the opening scene of Axone, the first Hindi film on the life of northeasterners outside the northeast (of India), we follow three young friends hurrying through their neighbourhood at the crack of dawn. In a furtive mission that resembles a spy flick, the trio reaches a dingy room tucked away in the lanes of Delhi colony Humayunpur. They find what they are looking for – a small portion of northeastern delicacy axone and a few kilos of pork. But the adventure has just begun: axone, is fermented soya bean paste used to flavour northeastern dishes, is known to be unusually foul smelling. “I grew up eating axone and it’s one of my favourite things. It’s a rite of passage for a northeastener living outside the northeast to have had the experience of cooking axone, dried fish, or anything pungent and run into trouble with their neighbour. It’s the most obvious idea to pick as all of us have gone through it,” says director Nicholas Kharkongor on choosing to centre the film on the ingredient.

Produced by Yoodlee films, Axone, based on the strength of its trailer, has created a buzz before its commercial release. The film premiered at London Film Festival in early October and will make its debut in India at the Mumbai Film Festival (MAMI) on October 19, 21 and 23. “We had two full houses at the London Film Festival and the Indians there said it resonated with them, because when they first came to London and would cook curry, it would smell and get them into trouble,” says Kharkongor. His first film, Mantra (2016) starred Rajat Kapoor as a wealthy Delhi businessman struggling with a professional and personal downturn.

Axone mines a very different kind of Delhi. Bereft of the city’s iconic images, it highlights a middle class locality, Humayunpur in south Delhi where Kharkongor lived for 12 years. He witnessed it morph into something of a China Town, with Korean pop influences and high street fashion, thanks to a swelling northeastern migrant population. Unfolding over one day, the film tracks friends Upasna (Sayani Gupta) and Chanbi (Lin Laishram) as they decide to surprise their friend Minam at her wedding the same evening with a dish of pork cooked with axone. It leads to a series of comic-tragic misadventures as they try to pull off an impossibly dramatic cookfest with help from a circle of friends from the northeast, while clashing with neighbours and landlords. “We have the right to cook our food. They also have the right to not have to bear the smell of our food. Whose right is more right?” remarks one friend to another in the film. Axone becomes a metaphor for identity and freedom.

Through the prism of a culinary adventure, Kharkongor explores the many layers of modern-day Delhi, identity, racism, friendship, and community. The film sails on a conversational tone that captures layers of everyday banter wrapped in a deep sense of suspicion, intolerance, insensitivity and exclusion between people who are not alike but must share spaces.

Axone is, however, not an ‘Us versus Them’ story. Even while the film brings out the biases, harassment and prejudice against the northeast community making their home in Delhi, it equally exposes the biases people from the northeast harbour against north Indians, even Nepalis. No one is free from bias and prejudice, the film seems to say. “The last thing I wanted to do was do a lopsided story. All of us across the world share a common bond of unconscious biases, racism, xenophobia. I was clear that while showing the racism against northeastern people, I would insert the racism practiced by them against north Indians, otherwise it would be incomplete and people would think that we are holier than thou, which is not at all true. There is a lot of prejudice back home in the northeast as well,” he says. The story is fictional, but bolstered by real life incidents and experiences.

One of them is the 2014 murder of Nido Taniam, the 20-year-old student from Arunachal Pradesh who was beaten to death in Lajpat Nagar, which left Khargonkor deeply affected. Adding to the authenticity is the casting, with many actors from the northeast. Northeast representation in film has been poor, notwithstanding the odd breakout star such as Danny Denzongpa, and he was trying to fill a huge chasm with Axone, says Khargonkor.

While the Punjabi landlords are played boisterously by Dolly Ahluwalia, Vinay Pathak and Rohan Joshi, with a tiny cameo by Adil Hussain, Sayani Gupta, who is Bengali, plays the lead role as Nepali girl Upasna.

Shot over 25 days on location, Axone is a slice of life film set in a sharply observed milieu with a specific texture. “Though the film is in Hindi, we made it look more South East Asian, akin to films from Hong Kong, with visual references to Wong Kar Wai’s work. We avoided certain colours, with more of greens and blues. The challenge was to capture how the lanes in Humayunpur transform during the day, and how to make it consistently progress over one day,” says Axone’s director of photography Parasher Baruah. Though the film exposes a difficult and complex reality, it leaves a viewer warmly hopeful for bringing to life a full-bodied, lighthearted northeast story that celebrates its colourful traditions and culture.

How is sound created in a xylophone?

The wedding brass band, Lata perennials on the paan shop transistor, deshbhakti songs at rallies, amplified M.S. at the roadside temple — wanted and unwanted, beautiful and cacophonous, music surrounds Indian life at all times and in all places. But there have been few efforts to document its all-pervasive and powerful place in our lives. […]

Pedro Almodóvar’s Pain and Glory can only be written and directed by someone who has lived most of his life, with the days of youth behind him. It’s a film that can easily look calculated, unless it comes from an intimate and personal space, if not entirely autobiographical. Almodóvar’s latest has that irreplicable nostalgia of […]

In November 1616, Sir Thomas Roe, the English Ambassador to the Mughal Court presented a coach to emperor Jahangir from the East India Company. Jahangir was so disgusted with his gift, lined with ‘poor quality crimson China velvet’ that he ordered it to be dismantled and replaced the fabric with a richly patterned luxury silk, […]