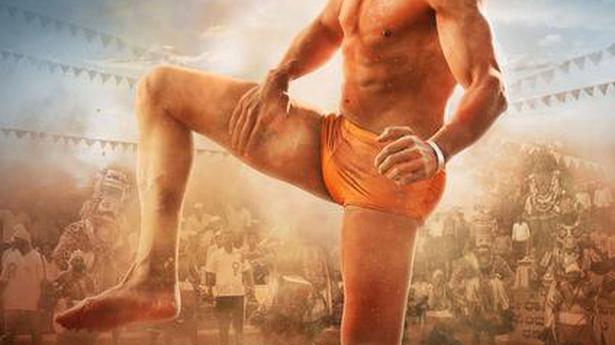 How does you elevate a commercial potboiler? A filmmaker would probably make a list of all the cliches and try to avoid or at least subvert them, but in Pailwaan, the tropes are treated as a checklist to ensure that none of them are left out.

An orphan and a father figure; a choice between marriage and sport; cardboard ‘monster’ villains; a father who arranges his daughter’s marriage to seal a business deal; a hero who falls in love with a heroine guided by astrology; a hero who lives for others, a sidekick who makes sexist jokes; and finally a heroine who accidentally drinks alcohol thinking it was water, but the hero makes sure that she does not smoke or drink: check, check, check.

But the filmmaker has some clarity of thought. With the aim of telling the story of a larger-than-life wrestler, the film adopts an epic narration. Ramesh Arvind, in a voiceover, introduces us to a toddler, saying that Lord Krishna grew up to be a pailwaan (wrestler) to slay Kamsa, and asks why this child is born, setting the tone of the film. Throughout the film, there are references to Krishna-Kamsa and Lord Anjaneya.

The genesis of the film is probably encapsulated in a line by Suneil Shetty, who returns to acting after a long break essaying the role of a wrestling coach, Sardar, who adopts Krishna (Sudeep), an orphan to make him a champion. “A person who fights because he has power is a rowdy, but a person who fights for a cause is a soldier”, he says.

He adopts the boy after he fought three older boys to buy food for other street kids. In true epic style, this is the crux of the story.

After several sub-plots that add little to the main story, wrestler Krishna, called Kiccha through the film, becomes a boxer to earn money for a cause. He wants to help street children excel in sports. However, this angle seems like an afterthought, and is not organic to the plot at all.

The central conflict between father figure and adopted son is the imposition of celibacy on the son till he becomes a national champion and the son falling in love. His subsequent marriage forces him into exile.

A rich city girl is shown willingly accepting an engagement without meeting the boy as her father ‘knows best’, but soon walks out of her home and marriage for the illiterate wrestler. The character arc is rid with inconsistency and the love story never convinces the viewer of her subsequent actions.

Director Krishna’s fascination with kings and royalty, that featured prominently in his debut film Gajakesari, continues here as well. The film, which seems set in north Karnataka, has kings and kingdoms still holding sway over the region, organising wrestling matches, betraying a fascination for feudalism.

This sets the stage for one of its cardboard villains in Sushant Singh, a royal defeated by the wrestler. The other villain is a boxer who Kiccha defeats in the climax.

At two hours 46 minutes, the film is a tad too long. Though it picks up pace in the second half, it lacks zing and is predictable.

“If somebody is in danger it doesn’t matter how much you hate them, you’ve got to be human,” says Bigg Boss contestant Kasthuri

Bigg Boss wild card entrant Kasthuri Shankar is known for her bold and snarky Twitter persona. The same was expected of her in the show by the makers Bigg Boss. She speaks to The Hindu about the show’s ideology, expectations, reality and more… How did you feel when you got out of the show? I […]

Punchline and sinker: The rising popularity of the news comedy genre

In an episode from the first season of Hasan Minhaj’s Netflix news comedy Patriot Act, the affable 33-year-old American comedian breezed into his act by declaring his show to be the (overwhelmingly young) audience’s preferred destination for “news and ’90s basketball references”. It was a typically self-effacing play from the man whose breakout hit, the […]