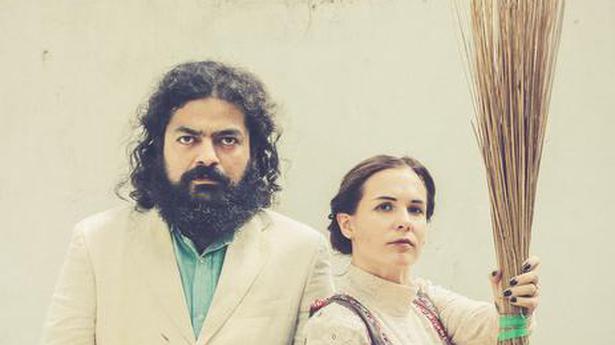 A new play marks a rare foray into theatrical production by the boutique arts space, Harkat Studios. Mrs and Marx is a collaboration between Harkat co-founder Michaela Talwar and Satchit Puranik, who will together perform what is billed as a multi-lingual documentary theatre piece. The ‘Mrs’ in question is Jenny Von Westphalen Marx, married to Karl Marx for 37 years, and whose contributions to his literary oeuvre have only belatedly come to attention. The play is a relentless 100-minute excursion, “across countries, war-zones and revolutions,” that draws on letters, speeches and essays associated with the couple.

Harkat Studios’ role in encouraging collective thinking within the theatre community was underlined by their hosting of last week’s Whose Play is it Anyway?, a series of well-attended panels on copyright and intellectual property. Their new play certainly marks an interesting diversion for a space with a distinctive voice. In another departure, Mrs and Marx will initially be staged at outside venues like the G5A Foundation of Contemporary Culture followed by the NCPA’s Tata Garden.

Puranik, a spitting image of the German philosopher, is known for his much-travelled monologue Karl Marx in Kalbadevi, which was incidentally the first performance hosted at Harkat, in April 2016. Written by Uttam Gada and directed by Manoj Shah, that play placed Karl squarely in the bustling Mumbai locality that is the very heart of Gujarati capitalist enterprise, providing a context for instant conflict and drama. Mrs and Marx is likely to be much more personal, more dialogue than dialectic, and Talwar and Puranik are intrepid documentarians even as they channel the essences of two characters drawn from history. Talwar’s German antecedents provided access to a treasure trove of information that have lent rigour and substance to the play, which has been infused with contemporary humour and a latter-day political outlook. Other collaborators on the project include scenographer Sharmistha Saha, light designer Asmit Pathare and composer Kaizad Gherda.

The reparative gaze at the past is one of the most remarkable aspects of contemporary discourse. For instance, Overlooked, the obituary project initiated by The New York Times continues to gather steam since its inception last year. The project sought to celebrate those remarkable women whose deaths were overlooked by the editors of the newspaper’s obituary section (established 1851). It’s astounding that Charlotte Brontë, Ada Lovelace and Sylvia Plath were among the overlooked. The project’s remit now extended, has paid obeisance to Indian women like Madhubala, Noor Inayat Khan, Pandita Ramabhai and Amrita Sher-Gil.

Yet there are those who have lived away from the public eye, and have made contributions to public life that lie beyond the purview of test and measurement. Women of households are no relics, and their invisible labour deserves to be unearthed and spoken about. Beyond the material is the spiritual, and the redemptive power of love. Mary Gabriel’s Love and Capital: Karl and Jenny Marx and the Birth of a Revolution is a recent tome that looked at the eponymous couple’s struggle to keep marriage and family afloat, their grappling with near penury even as Das Capital was being written. It casts light on what was undoubtedly one of the great love affairs of all times.

One of the artefacts of research for the book were the emotionally charged letters exchanged between the two, many of which have been translated into English and made available by the Marxist Internet Archives.

Mrs and Marx presents a condensed version of the not insubstantial material available on the lives and times of Jenny and Karl, whose philosophy and thinking continues to find takers in a world where Marxist institutions, well-intentioned or otherwise, are crumbling to dust. This is what will likely keep the new production within the realm of topicality, especially in an India where class struggle has been undermined by power structures but continues undeterred nonetheless.

Mrs and Marx will stage at Tata Garden, NCPA on May 5 at 8 p.m.; see bookmyshow.com

The Juhu police have arrested two fraudsters who allegedly cheated Yash Raj Films as well as their regular costume supplier by hacking the supplier’s email and cheating the production house into sending their fees into their own accounts. The police have recovered evidence to indicate that the duo have made lakhs of rupees in this […]

When news first trickled in that director Harish Shankar was remaking the 2014 Tamil film Jigarthanda in Telugu as Valmiki and that Varun Tej has been roped in to reprise Bobby Simha’s character, there was curiosity as to how the gangster drama would be reworked and how Varun would step into Bobby’s shoes. Varun’s recent […]

Netflix has renewed its smash hit show Stranger Things for a fourth season. Created by Matt and Ross Duffer, the show is set in a fictional US town of Hawkins in the 1980s that becomes the centre of supernatural events. It features an ensemble cast of Winona Ryder, David Harbour, Finn Wolfhard, Millie Bobby Brown, […]