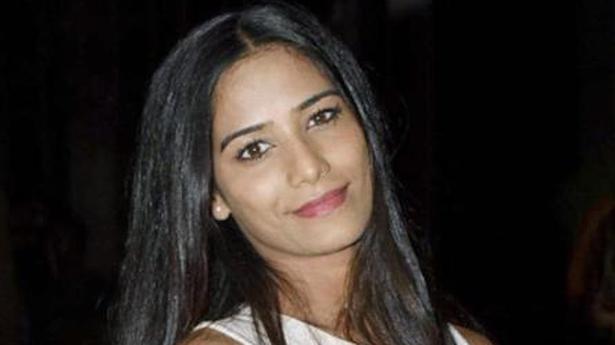 The actor, who was staying at a hotel at Sinquerim in North Goa, was detained by a Calangute police team in the afternoon and later handed over to the Canacona police

Actress Poonam Pandey was detained by Goa Police on Thursday for allegedly trespassing into a government property and shooting an obscene video in the coastal state.

Two policeman were also suspended after several citizens of Canacona town in South Goa district alleged misuse of government machinery for the shooting.

Pandey, who was staying at a five-star hotel at Sinquerim in North Goa, was detained by a Calangute police team in the afternoon and later handed over to the Canacona police, an official said.

A case was registered against Pandey on Wednesday for obscenity during the shoot at the Chapoli dam in Canacona town following a complaint by the state water resources department, which manages the dam.

On Thursday, several residents of Canacona called for a shutdown in the town while demanding action against police officials who allegedly provided protection to the actress and the crew members for the shoot.

The SP later said police inspector Tukaram Chavan and a constable were placed under suspension, pending inquiry by the state Home department.

Asked why the two policemen were suspended, he said details would be revealed only after the inquiry.

The state water resources department on Tuesday filed a police complaint accusing “unknown persons” of trespassing in its property, shooting and circulating an obscene video.

The Canacona police on Wednesday registered a case against Pandey for obscene gestures, trespassing on the government property, and for shooting and distributing an indecent video, an official earlier said.

He said locals withdrew their call for shutdown in Canacona after Chief Minister Pramod Sawant assured that the policemen concerned would be suspended.

The police later ordered suspension of an inspector and a constable, he said.

What would you do for your 50th birthday? Will Smith — who is still blue from Twitterati trolling his genie from the upcoming Aladdin — thought it was a good idea to skydive in Dubai with his wife Jada Pinkett Smith, sons Trey and Jaden Smith, and his in-laws. The Bad Boys actor doesn’t stop […]

Are we guilty of neglecting the importance of archiving in the performing arts?

The costume that Balasaraswati wore or Shambhu Maharaj’s anklets: where are these preserved? In India, archiving has never been taken seriously Source Related

Quiz: Malayalam cinema and location as a motif