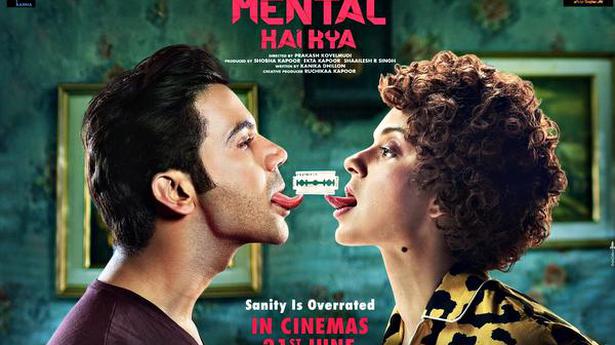 The Indian Psychiatric Society (IPS) on Thursday wrote to the Central Board of Film and Certification (CBFC), the Ministry of Information and Broadcasting, and the Prime Minister’s Office raising “serious objections” to the title of the upcoming movie Mental Hai Kya.

The first poster of the film, produced by Ekta Kapoor and directed by National Award-winning filmmaker Prakash Kavelamudi, was released last week. While the film was earlier set to release on March 29, the date was later deferred to June 21.

Calling the title of the movie “discriminative, stigmatising, degrading and inhuman in projecting mental disorders and persons”, the IPS asked the authorities to remove the title and censor sequences violating the rights of those battling mental disorders. The IPS, which is the largest association of Indian psychiatrists, has also threatened to file a Public Interest Litigation if the changes are not made.

“We strongly demand that the title be removed with immediate effect preventing further damage to the modesty of mental health service users. We also demand to censor any sequence in the movie that is violating the rights of persons with mental disorder,” the letter read.

Speaking to The Hindu, Dr. Mrugesh Vaishnav, president, Indian Psychiatric Society, said, “According to a study carried out by NIMHANS and the Health department of the government of India in 2016, 1/4th of the Indian population suffers from mental illness. There are lots of myths and misconceptions in our country surrounding mental illnesses. People still go to fake healers and often feel they are possessed. In this situation, when you have such a title of a film, it is wrong. The country is coming out of the stigma and media support is important. Members of the film fraternity have themselves come out with their stories. Will you call them mental?”

Dr. Vaishnav said according to the new Mental Health Act passed by the Parliament, Section 92(2) says that any attempt to intimidate or demean psychiatric patients and illness is liable for imprisonment for a minimum of six months. “ When the country is moving towards such progress, how can a film have such a title?”

Meanwhile, mental health practitioners also took to Twitter to condemn the title of the film. Dr. Sagar Karia, honorary secretary, Bombay Psychiatric Society, tweeted, “The way the promo of the film portrays the persons with mental illness is very wrong. It appears as though they are making fun of those suffering from illnesses, which is irresponsible.”

Representatives of Balaji Films could not be reached for comment.

Birbal, Lilliput, Manmauji, Veeju Khote. All together at a bar, sharing a drink. That one shot is the entire raison d’être of Kaamyaab written all over it – not to talk of the sheer nostalgia that it is soaked in – in a casual, throwaway manner. Hardik Mehta’s ode to the side-actor of the 70s-80s-90s […]

December 4, 1956 was an important date for rock and roll fans as it was the day Elvis Presley, Johnny Cash, Jerry Lee Lewis and Carl Perkins played together at Sun Records Studios in Memphis, Tennessee, for the first and only time. That impromptu jam session spawned an album, a book by Colin Escott and […]

The British Academy of Film and Television Awards (BAFTA) ceremony was held at the Royal Albert Hall in London, Britain, February 2, 2020. Britain’s top movie awards have been criticised for having all-white shortlists in its acting categories and an all-male one for director, triggering the use of the hashtag #BaftasSoWhite on social media. Here […]