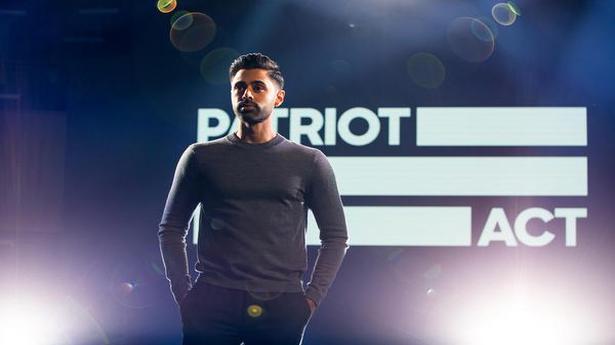 In an episode from the first season of Hasan Minhaj’s Netflix news comedy Patriot Act, the affable 33-year-old American comedian breezed into his act by declaring his show to be the (overwhelmingly young) audience’s preferred destination for “news and ’90s basketball references”. It was a typically self-effacing play from the man whose breakout hit, the stand-up special Homecoming King, was distinguished by moments of startling, nerdy self-awareness. A fortnight ago, Patriot Act returned for its second season and Minhaj began with a segment about Saudi Arabia banning an episode critical of the royal family (from the first season). Self-referential segments are a sign that your show has arrived, you know.

It was also indicative of just how popular the news comedy formula has become — especially with a millennial audience. John Oliver, the reigning champion of the genre (Minhaj recently joked about the futility of “doing a routine” only to “watch John Oliver do it better a week later”) mixes well-researched, meaty stories about dictators, rogue corporations and government overreach with elaborate pranks, muppets, marching bands, Weird Al appearances and much else. Michelle Wolf makes fun of Billy Joel songs even as she skewers the Trump administration.

These comedians understand that their young fans are woke, but the unpalatable realities of 2019 can only be swallowed with a joke. And so Minhaj, right in the middle of an impassioned monologue about America’s draconian immigration policies, segued into a hilarious takedown of ‘dick appointments’ (a zany 2010s phrase for scheduled hook-ups), another one of those #JustMillennialThings. It is important to note here that Minhaj, at 33, is firmly at the outer limit of the millennial continuum — endearingly, he acknowledged this and confessed that he had to ask his writers (who’re likely to be four to five years younger than him, if not more, making them peak millennials) what the phrase meant. “Do you, like, send a Google calendar invite? How does this work?”

He gets laughs off saying ‘dick appointments’ out loud. Half of those laughing are people who use the phrase conversationally; the other half are staring from the outside at a high-tech cage marked Young People™. Their chuckles almost certainly began as nervous laughter. As Hannah Gadsby had once famously explained, the comedian elevates the tension in the room to breaking point, and then she punctures it with the well-timed punchline.

That young people today have a complex, ever-shifting relationship with humour is not surprising — we’ve inherited a world unparalleled in complexity and shiftiness. What’s truly remarkable is how often we use humour to avoid un-ironic sincerity. We do this quietly, relentlessly. You can time Minhaj or Oliver in the middle of their monologues. Arcane pop cultural trivia punctuate their sentences with metronomic regularity, no matter the gravity of the underlying issue. Contrast this with an earlier generation of news comedians like Jon Stewart (Minhaj’s guru) or Stephen Colbert (Oliver’s favourite), who were well-known for ‘dropping the act’ in times of tragedy and addressing the camera with unvarnished vulnerability and gravitas.

This isn’t an argument in favour of one style over another. For all of Stewart’s gravitas, there is no denying that in terms of popularity and reach, the likes of Oliver and Minhaj are right up there with the old giants. Moreover, they haven’t forgotten the old ways entirely. Like their comedic fathers, they have always ‘punched up’ with their jokes. It is very difficult to think of a routine where they’ve sided with the powerful against the little guys, or cracked a blatantly misogynist joke, and so on.

Long after the ’90s basketball references become ancient rather than charmingly outdated, that’s the stuff audiences will remember.

(Aditya Mani Jha is a writer and journalist, currently working on his first book of non-fiction.)

‘My family thought I was being un-Islamic for wanting to be an actor’: Naseeruddin Shah

‘I’m enjoying this odd disconnection’: Xavier Dolan on what the pandemic has given him time for

Ahead of his latest film Matthias & Maxime hitting the virtual screens this month, director Xavier Dolan talks about exploring friendship, sexuality on screen, why he’s hopeful for the return of the movie theatre and what the pandemic has given him time for Source Related

Orson Bean, the witty actor and comedian, was hit and killed by a car in Los Angeles, authorities said. He was 91. The Los Angeles County coroner’s office confirmed Bean’s Friday night death, saying it was being investigated as a “traffic-related” fatality. The coroner’s office provided the location where Bean was found, which matched reports […]