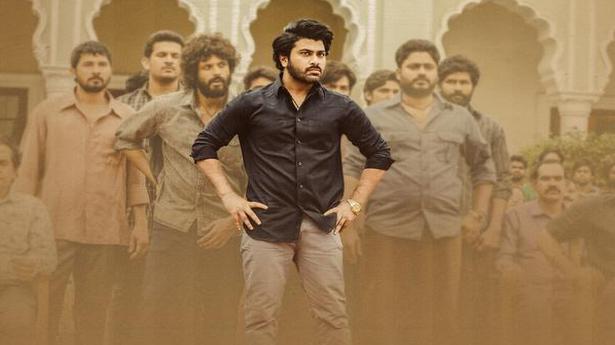 In his debut film Swamy Ra Ra (2013), director Sudheer Varma made it clear that he is tipping his hat to international filmmakers and declared that he is inspired by (not copying) their work.

The title credits of his new film Ranarangam begin with a quote from Fight Club: “Everything is a copy of a copy of a copy”. Again, this is Sudheer’s way of telling us that we can either sit back and enjoy the film or mull over which scene, camera angle, character trait or plot twist could have been inspired by which international film. In this film, he also doffs his hat to Ram Gopal Varma’s Shiva in a crucial scene.

Ranarangam, which means battlefield, is stylishly mounted and every frame is artistically put together. Cinematographer Divakar Mani and music composer Prashant Pillai work their magic. Divakar with his warm colour tones and wide angle frames, and Prashant with his affecting score that also understands the power of silence.

This labour of love hinges on a story that’s not new but had it been narrated well, could have made for a passable gangster drama. The timeline shifts between 1995, when Andhra Pradesh faced prohibition and a group of youngsters see this as an opportunity to trade illicit liquor, and the present where one of them is now a dreaded don based in Spain. Deva (Sharwanand) wields power and leads a life of luxury, but his eyes have lost the mirth of his younger days; he’s brooding over a personal loss and living with the hope of a better future for someone he dearly cares for.

In the 90s, Deva and his friends (Adarsh Balakrishna, Sudarshan and Raja Chembolu among others) would sell movie tickets in black. The boys have an easy camaraderie on screen and their style statements have a hangover of the 80s. When prohibition is imposed, they spot an opportunity to make quick money. The trade tricks are showcased with humour. This group doesn’t know that their trade stands in the way of a bigger illicit liquor racket run by the local MLA (Murali Sharma). Deva doesn’t back off amid threats; he expands his business with the support of people in his neighbourhood. There are those mandatory sequences to establish that he is a do-gooder.

Meanwhile, the romance between Deva and Gita (Kalyani Priyadarshan) develops playfully. Gita can see Deva for what he is but doesn’t truly confront him. The rapport she shares with her father is interesting, especially when she is given the choice to decide for herself if she is willing to walk a thorny path with Deva. Kalyani is endearing in her part and emotes beautifully. This is an actress who has the potential to shoulder parts with substance.

While the 90s portions that trace the rise of the gang are staged well, the present day portions falter. Just how many times do we see a villain (Ajay in this case) wanting to oust people from a locality for the sake of a new project through which he can earn a few hundred crores? Predictably, he wants to eliminate anyone who stands in that path.

Sharwanand tries to shoulder the film with his compelling performance, but there is very little to keep us engaged as the story progresses. In the last hour, the narrative shifts between the 90s and present at a languorous pace, making the 138-minute film feel much longer.

There are good performances from Adarsh Balakrishna, Praveen, Sudarshan, Raja Chembolu, Murali Sharma and Brahmaji. But, what was Kajal Aggarwal doing in this film? She is elegant and that’s about it; there’s hardly anything in that role.

For all that swag, if only Ranarangam had a stronger story and a more engaging screenplay. In its present stage, it’s a missed opportunity.

As the standards of pop and EDM started to tragically sink in the 2010s, a new breed of musicians came into the mix. Active since 2015, Ben Böhmer is one of Germany’s must-see talents in the alternative music space and he is currently on tour, having just completed a leg in Mauritius and in Mumbai. […]

Robert Downey Jr. will be back as Iron Man in ‘Black Widow’

Hollywood superstar Robert Downey Jr will be back as the enigmatic superhero Iron Man in the Marvel Cinematic Universe with Black Widow. Downey will be seen reprising Tony Stark aka Iron Man one more time in the prequel Black Widow, which stars Scarlett Johansson and is set to release in 2020, reports Deadline. Downey Jr, […]