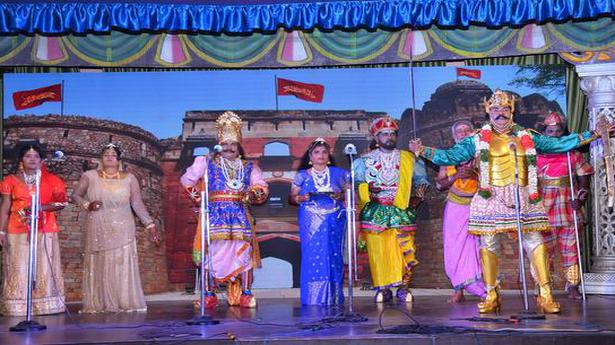 Vijay Sethupathi’s 25th film Seethakathi (2018) focuses on the unbridgeable gap between drama and cinema by audaciously removing the protagonist, a veteran of the stage named Ayya Adhimoolam, from the proceedings within the first half hour and replacing him with a ‘spirit’ that tries to look for drama-worthy roles on the silver screen.

Seethakathi is neither the first film to navel-gaze into the ethical dilemma that an entertainment-hungry society faces in cannibalising earlier art forms, nor is it the most subtle, but the message is clear — live theatre in Tamil Nadu has been declining in the very places where it took root.

It is ironic that when the ‘talkie’ debuted in southern India in the 1930s, it borrowed traditions, stories and even entire casts from the theatre troupes. Places like Karaikudi, Madurai, Salem, Tiruchi and Coimbatore emerged as production hubs for the studio-driven film companies based out of Madras.

Iconic film stars like (former Chief Minister) MG Ramachandran, Sivaji Ganesan, MR Radha, NS Krishnan and countless others were trained thespians before they came to cinema. But as Seethakathi points out, theatre now has to compete with an increasingly sophisticated rival for survival.

“Though there are 40 registered drama companies in Tiruchi, only four are actually functional,” says N Sekhar, secretary of Rasika Ranjana Sabha.

While it was not uncommon for the Sabha to stage four or five plays in a week in its heyday, today it has come down to one drama per year. “Inflation has hit the production costs badly; this is why troupes are forced to make their own team members fund plays,” says Sekhar. “When you add the cost of rehearsals, lighting and live music to the hall charges, the production budget can easily come up to ₹1.5 lakhs.”

The 105-year-old Sabha’s shows are usually free, because it is subsidised by its membership base of around 200 people. For the past few years, troupes from Chennai have been invited by the Sabha for theatre festivals during the winter months.

“Drama doesn’t get many takers or venues during the Margazhi classical music season in Chennai; so we give the companies there a chance to perform in Tiruchi,” says Sekhar.

A way of life

Drama has been a way of life for 45 years for producer and playwright RS Sridhar. He has written 60 plays for his Srirangam-based company SNV Creations, and last week, co-directed his historical Vetri Sangamam with K N Masthan at the Kalaiarangam hall in Singaperumal Koil, Tiruvanaikovil.

“I have a few actors on the payroll, but most cast members are amateurs with regular jobs,” says Sridhar, whose troupe has won prizes in over 200 state-wide drama competitions.

Most of his plays talk of social harmony. Vetri Sangamam, was about relations between the Jain community and Chola kings, with the underlying theme of secularism.

“The main draw is a story that will sustain an audience’s interest. We all know about high-budget films that flopped because they were basically boring,” says Sridhar, who funds his theatrical pursuits with the earnings from his contracting business.

Translated plays have been the forte of the Tiruchi Nataka Sangam since 1981. Among its acclaimed productions is an adaptation of The Misunderstanding by French playwright Albert Camus, that was performed at the Sabha theatre as Thavaraha Purinthu Kondu by an amateur cast, directed by N Jambunathan.

“We don’t Indianise any work except to the extent required to engage the audience,” says K Mahadevan, lead actor and public relations officer of the Sangam. Some the group’s members like (director/producer) A R Murgadoss and (actor) Shanmugha Rajan have moved out to Chennai and become big names in the film industry.

Mahadevan advocates making drama a part of the educational curriculum. “It has a soft power that can inculcate the right values. Earlier, the youth would have expressed their outrage over incidents like the Pollachi sex scandal through street plays. But now they advertise their opinions on social media,” he rues.

“College theatre groups are very creative, but the public doesn’t get to see their work off-campus,” adds Sekhar. “We need a common platform to nurture fresh talent.”

Theatre has provided students of the National Institute of Technology – Tiruchi (NITT), an opportunity to pool their creativity and come up with thought-provoking works through Thespians’ Society.

Established in the 1980s, the group currently has 25 members across departments and stages 2-3 plays on campus every year, besides participating in inter-college competitions.

What can be changed

“There’s no hierarchy in the Thespians’ Society, so we collaborate on everything, from writing the play to planning the sound and lighting,” says Sowmya Muthurangan, a final year ECE student who helps out with productions. “Being part of such a team helps us learn a lot from others’ performances and break our own inhibitions.”

The group most recently won the first prize for its play The Man-Eater of Mullurkara and an award for its directors Nirmal Pillai and Anupama Menon at the cultural festival of Rashtreeya Vidyalaya College of Engineering, Bengaluru.

The team is preparing for a new production in the coming week. “A lot of work goes into staging a play. To finally see it all come together on the big day is amazing,” says Sowmiya.

Meditations on canvas; The sixth edition of I Rise exhibition organised by Art Houz features works of 11 women artists

Travelling is Bengaluru-based artist Kayalvizhi Sethukarasu’s muse. “I sketch en route in my notebook and later develop them into my paintings,” she says. Her painting called Mangrove is inspired by her trip to Pichavaram Mangrove Forest where she went on a boat ride inside a mangrove forest. “I was surrounded by tall roots and all […]

The spate of Valentine’s Day theatre specials this week, all presented by men, might be an happy accident but it does call attention to how even a phrase as innocuous as, “Will you be my Valentine?” is a gendered proposition. In the natural kingdom, where mating rituals are often described in hetero-normative terms, females preen […]

Which theatre style connects with you the most, asks Deepro Roy’s new play

Snap, snap, snap. For Abdul, theatre has always been meant to be performed on the streets — where the people are. With snapping fingers, theatre is meant to literally wake audiences up to their pressing socio-political realities. He scoffs at the idea of performing a play on stage, for curated audiences that sit back and […]