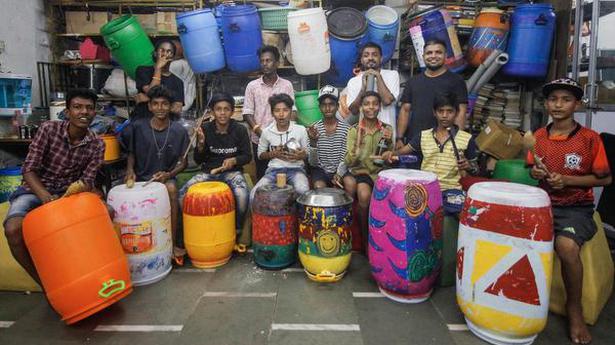 On a muggy afternoon, in a small room tucked away in the winding lanes of Dharavi, a group of 12 boys are eating sandwiches – then one of them starts a beat. The rest join in and soon the sandwiches are put aside, the volume swells, and their grins widen. Upturned water drums, steel vessels, and taped glasses filled with grains of rice make for instruments with the band, Dharavi Rocks.

A few extra drums hang on the bookshelves, with their paint peeling off. The oldest member, 25-year-old Shankar Mandar, explains that it’s the band’s tradition to paint them in vibrant colours for their performances. “It’s to draw attention to how we recycle these drums,” he explains. Soon the drums will be repainted, since the band – an initiative by the NGO Acorn Foundation – will be performing at Lower Parel furniture store Baro. The boys are currently being trained by Nashik band MH 15’s drummer, Vinesh Nair, and a handful of them will be performing along with singers Mandar Deshpande, Gomathi Iyer, and guitarist Ishaan Mehta at the event.

Pump up the volume

When asked about performing in an intimate space like Baro, Deshpande just laughs and says, “People should expect a loud set. It’ll pump them up!” Deshpande, a trained Hindustani vocalist, is now branching out and focusing on Bollywood playback. Having lent his voice to Vicky Kaushal’s character in Zubaan (2016), and even the song Faislay in Amit Kumar’s Monsoon Shootout (2017), he is now a senior faculty member at The True School of Music. Iyer who is 19, is one of Deshpande’s students. After studying Carnatic music under Vyzarsu Balasubrahmanyam for nearly a decade, the Hyderabad-based singer moved to Mumbai to explore Hindustani classical and Bollywood music. Guitarist Mehta is trained in numerous styles including jazz.

Talking about the melange of diverse styles Deshpande says, “After Gully Boy we were extremely excited because this is becoming [an important] scene for Indian music. Having a little bit of Carnatic, North Indian and jazz as a combination with Dharavi Rocks is obviously a challenging job. But we just sat with the kids [and] have been [jamming] here for the last two hours.” There’s more to the mix. The True School trio agree that the highlight of the evening will be rapper Vishnu Nair. With his curls tied up into a bun, the 20-year-old’s otherwise-constant smile only disappears when he picks up a mic and loses himself in his lyrics.

Collaborating with Dharavi Rocks for four years now, Nair shares that his first foray into rap was five years ago as a b-boy in the midst of a cipher, or gathering of hip-hop artists. At the time, Nair was drawn to the raw, poetic, and emotional verses of Tupac. Today though, he laughingly says, “Inspiration toh main khud ka hi hoon! (I am my own inspiration!)”

While he started out in Malayalam, Nair now raps in Hindi, English and Tamil and pens lyrics that are politically charged and about his surroundings. The rapper has performed alongside jazz flautist Rajeev Raja, Carnatic singer Chandana Bala, French electronic band Nojazz at The Quarter, and is part of a hip-hop band from Dharavi – Old Brotherz. Ask him what he has lined up for the evening, and the response is simply, “Jo bhi hoyega, full power hoyega (Whatever will happen, it’ll be powerful).” He does offer a glimpse: while he plans on performing a Hindi rap of his, he will also do a Malayalam one set to dappankuthu beats – the percussion-heavy Tamil folk music style.

The band will also perform songs like ‘Ghanan Ghanan’ from Lagaan (2001), and A.R. Rahman’s ‘Jai Ho’ from Slumdog Millionaire (2008). “We’ve chosen rhythm-based melodies – from an Assamese folk song to Rahman. There’s also Bezubaan [from 2005 dance film ABCD: Any Body Can Dance] and its lyrics are very close to what these guys face day-to-day.” Pointing at the Dharavi Rocks boys, Mehta says he hopes to leave the audience with, “Just how cool these guys are.”

Dharavi Rocks will perform at Baro, Lower Parel on March 29 at 7.30 p.m.; entry is free and open to all

Ajay-Atul keep it short but not memorable

For the third time since his iconic partnership began with A. R.Rahman with Lagaan in 2001, director Ashutosh Gowariker goes for a different composer. The last two instances, What’s Your Rashee and Khelein Hum Jee Jaan Sey, had Sohail Sen as composer. The latter in particular, was an underrated soundtrack in my opinion. For Panipat, […]

Laguparan has an interesting career trajectory. He started out as an assistant director, made his acting debut in Raatinam (a 2012 romantic drama), has shared screen space with Charlotte Gainsbourg in a French film, Son épouse (2014), and went back to assisting filmmakers (Kamal Haasan’s Thoonga Vanam). Then came this year’s thriller, Sathru, where he […]