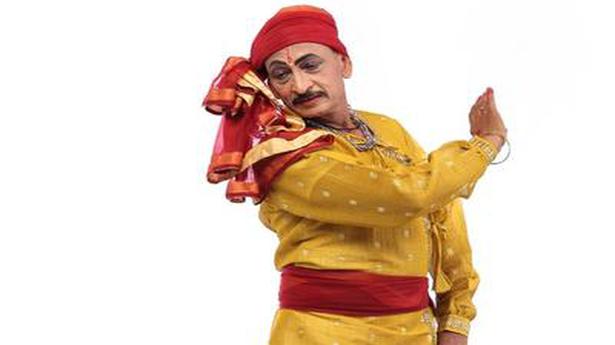 It takes courage and determination to pursue an art form that’s alien to the land. In a city where Bharatanatyam and Kuchipudi are patronised, Anju Babu made a mark by establishing one of the first dance institutes to teach Kathak in the south. His Kathak Kala Kshetra currently has 40 students, including six boys, mostly Telugu speakers. “These days parents are encouraging their children to learn Kathak. Every year, at least four students from my institute are ready to perform on stage. With two years of vigorous training, my students are ready for Natya Pravesam,” he says, adding that his students are spread across the globe. A member of International Dance Council of UNESCO, he was instrumental in starting the World Dance Day celebrations in the city two decades ago.

Anju Babu’s association with dance began when, as a child, he would perform folk numbers, what he describes as ‘Chhapalapate nrityam’ during Vinayaka Chaturthi celebrations. Watching him perform, his mother felt that her son had a penchant for dance and got him enrolled in the Music and Dance College in Ramkote.

Anju Babu recalls, “I joined the institute when I was 12. On the first day I saw guru Keshav Narayana teaching Bharatanatyam and he asked me to go to the adjoining hall. I went there and found Ramakrishna Shuklaji was teaching Kathak. I was asked to fill in the application form with Kathak as the option, and that’s how I was initiated into Kathak. Since then, there has been no looking back.

After completing a five-year diploma in Kathak, the Sangeet Natak Akademi selected him for further training in Delhi. There he trained at the Kathak Kendra under Sukhdev Maharaj for four years. “After I finished my training, many people advised me to stay back in Delhi and build a career there. But I was very keen to return to my hometown, Hyderabad and share my knowledge with my people; because it was from my hometown that I was selected,” says the Kathak exponent.

Back home, Anju Babu began promoting Kathak in a big way, touring every city, big and small, undaunted by people who questioned the need to perform Kathak, an art form from the North. The dancer sprung back each time, with renewed enthusiasm and determination. He is grateful to Kuchipudi legend Nataraja Ramakrishna for encouraging him. Soon, his name became synonymous with Kathak in Hyderabad. “In those days, there was only Doordarshan and whenever it showed a Kathak programme, people identified the art form with my name,” recalls Anju Babu.

Though he learnt the Lucknowi Gharana of Kathak, he was instrumental in promoting the Deccani Gharana. “The Deccani Gharana was present even during the Qutb Shahi period. For the last 20 years, I have been teaching this style. The stories and the abhinaya for the dance are the same; only the presentation is different,” says the Kathak guru, who has many unique choreographies and the Kathak Nritya Vikasam book in Telugu to his credit.

Among his memorable moments are the Deccan Dance Fest at Qutb Shahi Tombs that gave visibility to Kathak and Anju Babu, and the standing ovation in

Houston when Kathak was first performed as part of US Independence Day celebrations.

Amidst a standing ovation in a packed indoor stadium, three veteran actors — Rajinikanth, Amitabh Bachchan and Isabelle Huppert — were felicitated at the 50th edition of the International Film Festival of India in Panaji on Wednesday. Describing Mr. Bachchan as an “inspiration”, Mr. Rajinikanth honoured him with a shawl. Mr. Bachchan, who has a […]

The British Academy of Film and Television Awards (BAFTA) ceremony was held at the Royal Albert Hall in London, Britain, February 2, 2020. Britain’s top movie awards have been criticised for having all-white shortlists in its acting categories and an all-male one for director, triggering the use of the hashtag #BaftasSoWhite on social media. Here […]

An evening of conversation, in Hyderabad, sharing trivia and highlighting elements of Gulzar’s oeuvre came as a refreshing way to spend a Saturday for many a fan of the poet-filmmaker. The event jointly hosted by Kalakriti Art Gallery and Harper Collins India to launch Sathya Saran’s book Gulzar’s Angoor delved deeper into the man Gulzar […]