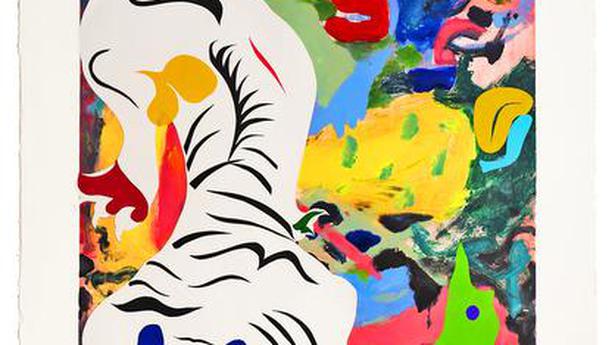 Driving past Tao Art Gallery in Worli, it is impossible to miss the paintings by artists Michal Raz and Viraj Mithani that hang on the street-facing walls of the space. The works are strikingly bold and fluid, conveying a sense of velocity and pandemonium that resonates with the pulse of the city. The show titled Boomerang, is curated by Sneha Shah, who founded Curaty Ltd, a London-based art consultancy that aims to “champion young artists,” after completing her MA in Art History at University College London last year.

Raz and Mithani’s paintings bear uncanny semblances, as far as their sense of scale, processes of layering, and colour palettes are concerned. Their works embody notions of dynamism and vivacity through their applications of bright swashes of colours, and abstracted lines and forms that oscillate between being rendered with careful-control and unhinged-spontaneity. The paintings implore viewers to continuously shift their gaze across their surfaces, reorienting their focus from one point to another, and making them inadvertently revisit particular areas with a renewed sense of perception. Arguably, the ‘boomerang effect’ that Shah describes in her curatorial note as “the act of re-appearing or returning from a direction that is opposite” may be experienced first and foremost, within the viewers’ immediate encounter with the works.

For Shah, this exhibition is a “harmonious meeting point” where the artists are showcased together for the first time. She expresses that not labelling any of the works was a conscious choice which would force viewers to look closely to decipher who made what. While the distinctions between the artists’ individual concerns unravel quickly, it is difficult to believe that Raz and Mithani had never met before this exhibition, had no conversation in regard to their works, and have dissimilar backgrounds. Raz is an Israel-born artist, who completed her MFA at the Slade School of Fine Art in London, where she is currently based. Shah met her at her degree show last year. Meanwhile, Mumbai-based Mithani has a BFA from the School of the Art Institute of Chicago (2015), where he was Shah’s classmate, and also holds a diploma from Chelsea Camberwell College of Art and Design, London.

In addition to their stylistic affinities, the two artists also respond to traditions, philosophies, and life in India. Raz has expressed how her numerous visits to India, her engagement with yoga, and concepts from the Upanishads have played an integral role in shaping her work. Mithani revisits folk and religious myths that he grew up with, while responding to life in Mumbai that he became more cognisant of upon returning from studying abroad. “Arriving at the same subject from opposite experiences, both artists tackle their individual confrontations, reflections, and learnings of India within their works yet stay loyal to their stylistic trajectories,” Shah describes. The ‘boomerang effect’ takes on a more nuanced implication in this show as the past is grappled with in the present. The artists’ distinct approaches open up deliberations surrounding narrative techniques, notions of time, and the structures we operate within.

In their own way, Raz and Mithani subvert strictly linear narratives. Mithani cites images conjured by mythological and historical accounts — he references Lord Krishna, the Demon Mahishasura, and the ancient game, Chaturanga, among others. He juxtaposes these specific referents with abstract imagery and art-historical appropriations, most prominently evidenced in his renditions of Matisse’s famous cut-outs. Mithani emphasises that he doesn’t use concrete symbols to reiterate existing narratives. Instead, he regurgitates them to evaluate them from a contemporary perspective. For instance, in his work entitled ‘Virtuous Woman,’ Mithani obscures the face of a woman displaying ‘idyllic feminine’ characteristics disseminated over time to question the integrity of the very notion of virtuosity. His works may effectively be viewed as interventions that compel viewers to revisit myths and consider the values they propagate, cautiously.

“On the other hand, Raz rejects narratives and playfully toys with semiotics, leaving hidden meanings, metaphors, and symbols through her work,” Shah suggests. Raz acknowledges that while her colour choices are influenced by sights in India, she avoids specific references. “Although my process is driven largely by concepts from the Upanishads, my work is abstract and I do not use any narratives,” she states. By translating her sensorial experiences in India into tangible artworks, Raz creates works that are open to subjective interpretations. In these paintings, one may trace images and ideas ranging from architectural elements and landscapes to suggestions of dialectical concepts of “night and day, heaven and earth, or male and female, ” that Raz considers elemental to all creation myths.

Both artists use processes of layering in their works. Mithani acknowledges how his practice is driven by a “preoccupation with the history of mark-making.” This relates not only to his passionate engagement with art history, but also to his archival instincts. He expresses, “I keep a sketchbook in which I collect marks from all over to record my obsession with preserving them.” Admittedly, he also never destroys any of his works. Although he layers different images and gestures onto each other in his paintings, every mark is equally significant. For Mithani consequently, history is not relegated to the past but is made relevant within the present.

Shah describes how Raz’s adoption of layered images may be “a residue or imprint of being brought up in Israel where contradictions and rules co-exist in indecipherable layers, be it social, political, cultural, or even religious.” For Raz, “detachment is key.” Although her works speak of simultaneity and coexistence, her process and final realisation of works consider the idea of presence in a meditative manner, in conjunction with her engagement with yogic principles. For both artists, their layering techniques point towards a spatial understanding of time —everything exists on the same plane.

Boomerang is ongoing at Tao Art Gallery, Worli until October 18

It’s been a huge deacade for Disney; they’ve been on an aquisition high ever since their acquisition of Lucasfilm in 2012 and 21st Century Fox just this year. Ongoing now, at Anaheim Convention Centre in California, is D23 by the Official Disney Fan Club. As well as the new content which will have us ready […]

The autonomy of culture

Rangayana is the name of a chain of small theatre repertories in Karnataka, built over the years with much love by the people of Karnataka. There are four repertories today — in Karavali, Malenad, Hyderabad-Karnataka, and Shimoga — with proposals for a few more. A repertory is a theatre institution meant to perform plays professionally, […]

Bob Dylan’s ‘Times They Are A-Changin’ lyrics for sale for $2.2 million

Bob Dylan’s handwritten lyrics to his 1960s classic The Times They Are A-Changin’ are going up for sale with a $2.2 million asking price in what could mark a world record for rock lyrics. Gary Zimet, owner of Los Angeles-based autograph dealers Moments in Time, said the one-page sheet of lyrics was originally owned by […]