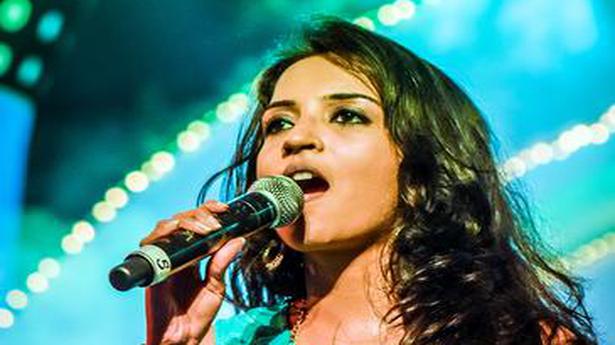 When singer and composer Sangeetha Rajeev walks in, her infectious smile lights up the room. With over 1,000 live performances to her credit, in India and abroad, Sangeetha is also a well-known playback singer in Karnataka and has recently made a foray into the Telugu film industry. A juror on Zee Kannada’s singing reality show Sa Re Ga Ma Pa, she has had her songs featured on MTV India and BBC UK.

With English pop music being a major influence all through her growing up years in Mumbai, she introduces the style in her Hindi and Kannada songs. And now, her Hindi single, ‘TuHi’ has won the Best International Pop Song 2019 at VIMA (Voice International Music Awards), a highly-anticipated music award in Asia. All set to head to Malaysia soon to receive her award, Bengaluru-based Sangeetha chats with us about her musical journey.

Your musical journey has taken a few diversions before getting on track, hasn’t it?

I come from a musically-inclined family and have been singing since the age of three. I learnt from my mother, a Carnatic singer herself. However, at one point, I decided to learn Bharatanatyam to become a professional dancer.

But an accident and a resulting spinal cord injury took that off the table. I then studied engineering, worked in London for a while, and decided to quit my job and take my chances with music, and here I am today.

Usually, its playback singing that leads to live performances, but in your case, it worked the other way around.

When I first came back from London, I started from scratch and struggled for two years to gain a foothold. From a corporate salary to earning nothing at all was difficult. The journey was slow and I got a break with live performances. I was also keen on working on a Kannada rock album and released my album Sarvasva in the first year of my music career. It was through this that I got offers for playback singing. I began with rock and moved to what I really liked — pop music.

You moved onto Hindi pop, yet you continue to retain a strong Kannada audience. How did you make that work?

I was always influenced by pop — Mariah Carey, Michael Jackson, and Britney Spears were my constant. I tried to sing Bollywood songs in the pop style and that is what I have evolved to do now in my compositions. My songs have a Western touch because I like the genre and the style of singing, and I also find that my voice is best suited to it. To keep my Kannada audience with me, any song I release in Hindi, I do a Kannada version of it as well. I will always make good music for the Kannada audience, and my Hindi numbers have helped me spread my wings and reach a wider audience.

I am hoping more people are open to listening to originals on stage during performances and even online. Sangeetha Rajeev

While Indian independent music has been on the decline since early 2000, it has picked up in a small way with people making music videos. Its decline could be attributed to the rise of Bollywood and other film industries. Independent music today is still quite commercial in nature. Comparatively, the pop culture abroad is far advanced and they are able to perform independent music and earn from it. I am hoping to bring about a change with my work and am hoping more people are open to listening to originals on stage during performances and even online, with music videos that are released. Having won the VIMA award, I hope to have opened the channel for people to work in this genre and gain recognition for themselves.

Two of your songs were nominated for VIMA and you won the Best International Pop Song of the year. Tell us about these songs.

My song ‘Zindagi’ was nominated under the Best Indian/Punjabi song category, open to Asian people who sing in Punjabi and Hindi. This song is the complete story of my life as a singer, about my motivations and inspirations. I blended the genres of EDM and pop for this song. ‘TuHi’, a romantic song, was nominated under the Best International Pop Song of the Year and won across global entries in a multitude of languages. For me, this was totally unexpected and overwhelming too.

What does the award mean to you?

I have always wanted to make songs independently and shine the spotlight on Indian pop. With this award, I am convinced that this is what I want to do. I am open to collaborations across the country and internationally too. The plan is to bring out quality music, in any language — Hindi or regional — and ensure that it reaches an international audience. I am working on a new set of singles and one is due to release this week. I have set a standard for myself to make things bigger and better. Now that I won, I am investing more and working harder.

After the State government allowed special early morning shows for actor Vijay’s Bigil, at the nth hour, theatre owners in and around Tamil Nadu reportedly sold tickets at exorbitant rates on Friday. That did not come in the way of a bumper opening. In fact, tickets have sold out for the next four days. The […]

“Chennai…Thamizha!” called out A.R. Rahman to the cheering audience as he began his live concert on Saturday evening. Throughout the evening, the music composer took the audience at the YMCA Grounds, Nandanam, through a mix of his old and new hits. While the concert began with the Tamil anthem Semmozhiaana Thamizh mozhiyam, Rahman then launched […]

Shekar Reddy displays an enthusiasm of a debutant and the confidence of a veteran as he awaits the release of his film 90 ML. The film stars RX100 fame Karthikeya. While informing that this film has no connection to the Tamil film 90 ml, Shekar shares details of his film,. “Director Ajay of RX100 is […]