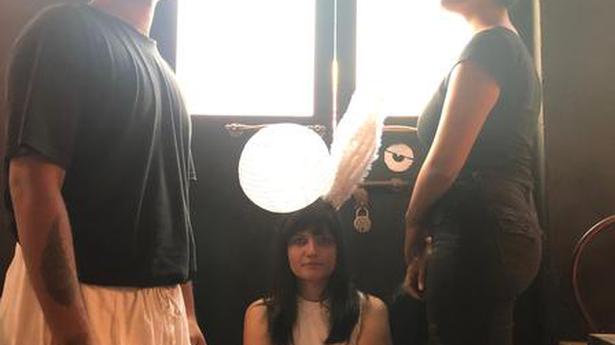 ArtNowThus, the intriguingly named new theatre group that is the brainchild of Ragini Singh Khushwaha and Akshat Nigam will open its act with The Mad Tea Party this weekend. As evident from the title, the inspiration behind the gig is Lewis Carrol’s Alice in Wonderland, and its irrepressible characters are likely to be in attendance, but the outing is more than just a grotesque soirée.

It brings together artists and innovators across disciplines for a multi-layered experience. For instance, an exhibition of music and photography by Raj Lalwani and Ronojoy Sircar will be lent atmosphere by a soundscape by Sid Vetekar. Artworks by Illesha Khandelwal and Ayesha Kapadia will be showcased, and scenes from Carroll would be performed by a madcap ensemble, all in a span of two hours at an as yet undisclosed location in Bandra. For Khushwaha, who moonlights as programme head at the Drama School Mumbai, it was a coming together of kindred spirits, and she hopes the work fosters an ethos of community sharing. “The book has everything — nostalgic appeal, complex themes, fun and humour. It was perfect for a group of artists to come together and work around,” she says, of their collaborative venture.

Another evening of immersive theatre that launched off from Alice in Wonderland and its almost fetishised tropes was organised by the Dur Se Brothers at the now defunct Cool Chef Cafe in Worli, circa 2012. That production derived its undercurrents from the ‘found’ qualities in a space that had developed quite a reputation as a ‘gig venue’ that hosted live events (and, very occasionally, theatre). It was business as usual at the kitchen and bar, the only difference being that unsuspecting patrons were to be accosted by a cast of Carrolesque characters in chromatic costumes who take over the space with their extravagant joie de vivre and stories.

The Weird & Wonderful featured many from a then-upcoming crop of theatre practitioners, including Sujay Saple as the Cheshire Cat, Sheena Khalid as the Mad Hatter and Dur Se co-founder Yuki Ellias as the March Hare (in a characteristically agile rabbit-cum-ballerina avatar). It would seem, ‘Nonsense’, of the particular brand found in the books of Carrol and Edward Lear, always lends itself rather spectacularly to theatrical transmogrification. There is also the instant identification with the eccentric denizens of Wonderland who generations of Indians have been acquainted with since childhood.

More recently, the happy marriage between a culinary outing and a theatrical one was attempted by the new ‘immersive experiences’ outfit on the block, PaChaak. Directed by Divya Rani, The Lost Supper featured gourmet delights from resident chef Onkar Samarth. The setting was a restaurant with a specially created ambience, and audiences (of not more than 20 at a time) were guests at the owner’s banquet dedicated to the memory of his departed wife (whose spirit might be hovering around). It was a half-sinister whodunit lent levity by occasional gaffes, and perhaps the esprit de corps among guests in trying to make more out of their evening compensated for the general lack of stagecraft. The actors were sincere but what tided over the evening was the realisation that, try as much as we did, disbelief could never really be suspended, but in an implausible world where everything might be a clue, we could certainly play along. The Lost Supper, unwittingly perhaps, allowed its audiences to ‘belong’ to the space, and sometimes blurt out retorts and observations, which could’ve thrown off some of the actors, but they gamely recovered. The food, over five courses, soup and dessert included, certainly helped a lot as well.

At The Mad Tea Party, ‘rebel chef’ Gresham Fernandes will serve up ‘edible suprises’ in what is dubbed a ‘mad meal’. If things go to plan, theatre, art, music and nourishment will all magically combine to provide fodder for the soul that could well be worth the price of admission.

Let us all collectively put on our tin foil hats for a moment and ponder over the industry today. Some of the most lucrative games are those massively multi-player online shooters, which require a lot of development time to get out the door finished. However, in the rush to get them out the door and […]

My father said if you work sincerely, then change will occur: Shabana Azmi

A screening of the film, Kaifinama: A Celebration of the Art and Times of Kaifi Azmi, that looks at the life and illustrious body of work of the Urdu poet (1919-2002), is perhaps the best way to celebrate his birth centenary year. The film is being screened across cities in India and abroad. At the […]