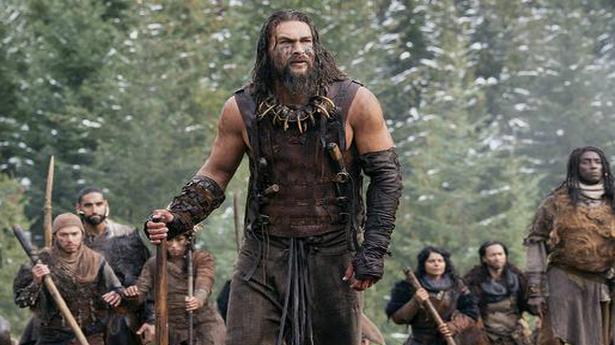 While trailers and promotional images imply See takes place in some pre-Medieval era, it’s revealed to be set centuries after an apocalyptic viral outbreak in the 21st Century from which fewer than two million people survived, all without their sight.

The story moves around a small clan, the Alkenny tribe, guided by spiritual leader Baba Voss (Jason Momo) whose wife Maghra (Hera Hilmar), an outsider to the tribe, gives birth to twins born with sight. This anomaly lures in the Witchfinders led by Tamacti Jun (Christian Camargo).

The lack of sight reflects in the architecture of their village where everything is set up to be more touch and hearing oriented. From what we’ve seen with most post-apocalyptic shows, an explanation of why this civilisation went ‘back to basics’ is unneeded.

From the get-go, one does wonder if See is hopping on the stealth-versus-sense bandwagon of Hush, A Quiet Place and Netflix’s Bird Box. But the series has a brutal approach to war in a time of blindness. Given the show worked with blind and low-vision cast, crew, and consultants for authenticity, as mentioned by Apple CEO Tim Cook, the battle scenes are convincing, with remarkable strategy.

‘Into the political space’

Casting Jason Momoa as Baba Voss — an Alpha with a clichéd pre-battle pep roar — was a given. With rustically savage shows, such as Game Of Thrones, Frontier and The Red Road, under his belt, Momoa makes it known that he’s comfortable in roles which have that earthy resonance. See, however, is more of an emotional role for Momoa with Baba Voss having to protect his children as well. While not the most relatable character, he’s the one we’re definitely looking out for the most.

Alfre Woodard’s Paris (what a name!) is a myth-driven midwife and leader to the Alkenny tribe but early episodes don’t show her character’s true potential. But do keep a lookout for the magnetic Queen Kane (Sylvia Hoeks) who rules the Witchfinders.

Dialogue in See often converges modern and yesteryear English; clearly writer and creator Steven Knight wanted to take advantage of the elasticity of language but at times, it does tend to get cringeworthy — sometimes to the point that a moment of tension is undermined.

As predicted, the series forays into political space; it’s not about race off-the-bat but about territories… but not so much that it ventures into historics. We’re dealing with whole new societies in See, our nations today not even a reference.

It’d be a crime to not experience See on a big screen at home given the mesmeric locations and floor-throbbing sound design and music. Bear McCreary’s wild compositions are the ideal backdrop to the otherworldly visuals; he did, after all, give us the memorable music from Outlander, Black Sails and The Walking Dead.

Frankly, the show won’t be everyone’s cup of tea; the sometimes lacklustre visual effects are a foil to the stunning natural sets of Vancouver. Plus, there’s a terrible irony with See: as viewers, we get to see the widespread mountains and sky-grazing trees while the characters cannot. Considering See’s behemoth production value, Netflix and Amazon Prime should be hoisting their socks up a little higher. Apple’s debut release batch was mindfully strategic, with See and For All Mankind setting the bar for their adventuresque content.

Overall, See is the ideal binge-pleasure for those who love Jason Momoa and heavy doses of passionate battle. It takes the concepts of Bird Box and A Quiet Place and subverts them with real experiences with careful dashes of the otherworldly.

Apple TV+ will be available on the Apple TV app for ₹99 per month with a seven-day free trial starting November 1 on iPhone, iPad, Apple TV 4K, Apple TV HD, Apple TV (third generation), iPod touch and Mac. To subscribe to Apple TV+, customers must update to iOS 12.3 or later, tvOS 12.3 or later and macOS Catalina.

The subscription will automatically renew at ₹99 per month at the end of the seven-day free trial.

‘The Red Sea Diving Resort’ review: Chris Evans can’t quite save this forgettable outing with too many tonal shifts

If this storyline sounds familiar at all, it is because it has several things in common with the 2012 Ben Affleck-directed Argo. Both films are based on a true story and begin in 1979, both star a bearded, white guy with a young child and is having problems in his marriage… and the phrase ‘leave […]

Prithviraj Sukumaran on being stuck in Jordan: ‘We will wait for the appropriate time to come back to India’

Malayalam star Prithviraj Sukumaran who is currently stuck in Jordan with a 58-member cast and crew team of his film Aadujeevitham has given an update on their situation. With a message via brother Indrajith, the actor-director shed light on the issues they are facing, which prompted his film’s director Blessy to request the Film Chamber […]

Finally he breaks even

Rakshit Shetty’s Avane Sriman Narayana (ASN) is declared a hit. As the film scores well at the box office with each passing day, so do the film’s character artistes. Though the cast is almost the same as Rakshit’s Kirik Party, there were a few other actors who have joined the Rakshit band with ASN. One […]