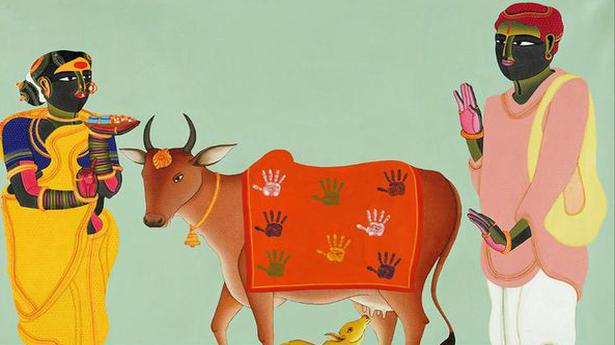 Disruption is the mantra of the current times. A potent, positive force that can break conventions, catalyse changes and accelerate movements, disruption is not always a negative word. Creative Disruptionists – The Home Coming, an exhibition of Fine Art and sculptures by Indian Modern and Contemporary artists celebrates the spirit of disruption that births ideas that are ‘undeniably bold, innovative and new.’

The show also marks the homecoming of Krishen Khanna, a veteran whose paintings adorn the famous dome at the lobby in ITC Maurya. Made between 1980-1984, the mural, The Great Procession, is inspired by the Mauryan Empire (after which the hotel takes its name) and the contemporary India of the 1980s, and is as relevant today as it was then. The show has been curated by Vandana Haksar and Avantika Haksar Chopra in partnership with T&T Motors. While Vandana has been working in the art space for almost two decades, Avantika is a lawyer who set up Art Aesthete, a company that curates, commissions, sources and sells art.

For decades ITC Hotels have been supporting art appreciation through art camps and exhibitions. WelcomArt initiative is a platform run by the group for budding artists, which helps showcase their work at various hotels of the chain. The exhibitions, meanwhile, showcase both established and upcoming talents. As an extension of the support, the 4-day exhibition promises to bring to the capital over 100 pieces of paintings and sculpture in various forms and genres.

“ITC’s hotels were the first to perceive the significance and impact of contemporary art in independent India.” says Dipak Haksar , Chief Executive, ITC Hotels and WelcomHotels. It started with ITC Maurya, New Delhi, which is a repertoire of traditional, contemporary, and modern art with works of M.F Husain donning the windows of its lobby and murals of Krishen Khanna adorning its legendary dome. “The ITC Maurya collection, says Haksar, is representative of the chain’s efforts in promoting authentic indigenous art; both contemporary and inspired by folk and tribal traditions.”

Classical on the iPad

It is rehearsal day for a group of young Carnatic musicians. One expects to hear strains of the violin and ragas filling the air, but instead there are peals of laughter as three of the four musicians are busy playing a game of poker, or Telestrations, or Mafia, while the fourth orders food. Eventually, they […]

‘I have lost several years as a filmmaker’: Vinayan

Director Vinayan has had a reputation of being a rebel for long. From being at the helm of an organisation comprising technicians in the Malayalam film industry, he became persona non grata on account of certain issues and power struggles within the industry almost a decade ago. Since then, as a filmmaker, it has been […]