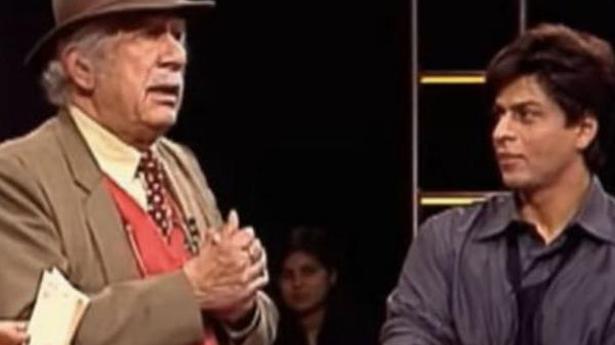 Superstar Shah Rukh Khan has paid tributes to director Colonel Raj Kumar Kapoor, the man who gave the actor his first break on television in Fauji.

The family of Colonel Kapoor announced on Thursday that the veteran director died earlier this week. His last rites were performed at the Lodhi crematorium in Delhi.

Colonel Kapoor was best known for the 1989 show Fauji, which chronicled the training of an Indian Army commando regiment.

Sharing a throwback photo with Colonel Kapoor on Twitter, Shah Rukh said the director played an important role in making a “Fauji out of a boy”.

“He loved me so much. Encouraged me. And today if I am used to being mollycoddled on sets it’s because of this man who made a Fauji out of a boy, like his own. Will miss you Sir…always. May you find peace in your new mission,” he said.

In reply to Shah Rukh’s tweet, filmmaker Shekhar Kapur recalled that Colonel Kapoor had introduced the actor to him. “Yes, I remember well the day the ‘Colonel’ brought you to my house during ‘Fauji’ ‘Watch this young man,’ he said. And he was so right. What a wonderful compassionate man,” Kapur wrote.

To this, Shah Rukh said Kapoor was always very “jovial” and “full of life”.

“Somehow in the midst of all stresses he had a way that could make you smile away your troubles. One of those people you assumed will never leave your side cos he was so full of life,” he wrote.

According to reports, Colonel Kapoor passed away due to age-related issues, aged 87.

‘The killing was a turning point for fake news’

Two decades ago, in the middle of the night, a gang led by Dara Singh, a criminal with links to the Bajrang Dal, a Rashtriya Swayamsewak Sangh (RSS) affiliate, set fire to the jeep of Australian Christian missionary Graham Staines, who was asleep with his two sons, Philip and Timothy. The mob was driven by […]

I’ve never been as emotionally burnt out as I was post ‘Chhapaak’: Deepika

Deepika Padukone says her upcoming film “Chhapaak” has been her toughest and most emotionally taxing project till date. Directed by Meghna Gulzar, the film is based on the life of acid attack survivor Laxmi Agrawal, played by Deepika and also stars Vikrant Massey. Speaking at a session at Jio MAMI Movie Mela with Star, 2019 […]

In his debut film Swamy Ra Ra (2013), director Sudheer Varma made it clear that he is tipping his hat to international filmmakers and declared that he is inspired by (not copying) their work. The title credits of his new film Ranarangam begin with a quote from Fight Club: “Everything is a copy of a […]