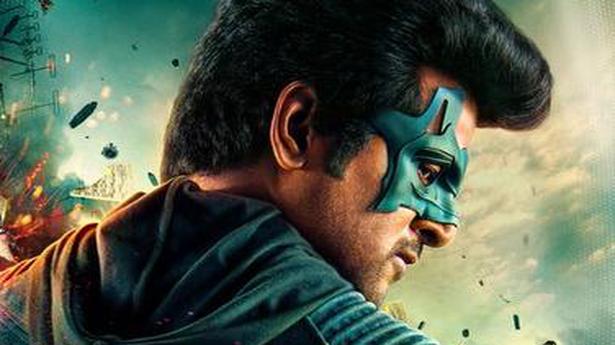 Directed by PS Mithran, who made Irumbu Thirai with Vishal, Hero has been in the news earlier for its casting: Bollywood actor Abhay Deol and Kollywood’s ‘Action King’ Arjun Sarja were roped in, and Kalayani Priyadarshan will make her Tamil debut as well.

The new look features Sivakarthikeyan wearing a mask, with a document bearing an Indian government emblem behind him and chaos and fire all around. Does he play a vigilante? A superhero? A common man taking to the streets to fight for a cause? Shades of Vijay in Velayudham and Jiiva in Mugamoodi seem to be present in Siva’s character.

Indeed, Bollywood’s Krrish is one of the few Indian ‘superhero’ movies to make a mark, with Tamil cinema never attempting the genre.

Sivakarthikeyan was last seen in Namma Veetu Pillai which is a huge success, reviving his stock after the disappointing Mr. Local.

Yuvan Shankar Raja is the composer of Hero, and fans are excited to see how this collaboration will pan out.

The first meeting between Gautham (Harish Kalyan) and Tara (Shilpa Manjunath) isn’t the sort that one would expect after seeing the cutely-in-love kind of posters of the two in the promotional material. He picks a fight with her a few minutes into seeing her for the first time, and drops her into a swimming pool. […]